5 immigrants share what their first Thanksgiving as U.S. citizens means to them. 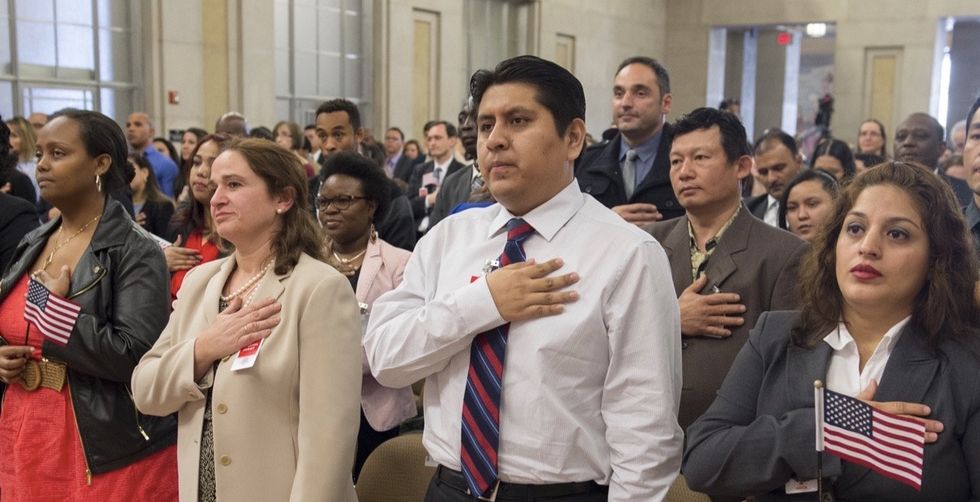 If you were born in America, your first Thanksgiving was probably spent as a bewildered baby, being spoon-fed mashed potatoes by giant people whom you would later come to recognize as your family members. As an adult, the only thing that's really different is who's holding the spoon.

Plus whatever this is. Photo by Hiroko Masuike/Getty Images.

For many immigrants who've recently become U.S. citizens, however, this Thanksgiving won't be like any other. It's supposed to be a holiday where you reflect on what you're thankful for, but after a divisive election filled with anti-immigrant rhetoric, finding things to be thankful for can be challenging.

I spoke to five new American citizens about what's on their minds this Thanksgiving and what they're thankful for. Their answers are inspiring, difficult, and incredibly important to hear. For the most part, though, they're doing what the rest of us will be doing on Thanksgiving — just with more anxiety.

Santiago Svidler, an Argentinian immigrant who became a citizen in 2014, is openly frustrated about the state of the country but is looking forward to being with his family on Thanksgiving.

A politically conscious journalism major at California State University, Northridge, Svidler knows that the election and all of its implications will surely be a topic of conversation around the dinner table.

With a family so diverse, you bet their Thanksgiving table reflects that. Aside from the typical turkey, stuffing, and mashed potatoes, "we also accommodate all of our family members’ dietary needs. So there’s vegan for those who are vegan; there’s vegetarian options [too]," Svidler says.

As for where he finds hope and things to be grateful for in the wake of the election, Svidler admitted it's hard. "This is like a grieving stage," he says. But regardless of what the president-elect tries to do, "we're going to stand up and fight for our rights. Because this is an America that is for everyone, not just those at the top who are white, male, heterosexual."

He recently attended a protest in Los Angeles that reminded him of how much he appreciates the ability to speak his mind. "Everyone had different signs that they made affiliated with what their cause is," Svidler explains. "It went from abortion rights to immigration to student debt. It was a huge variety, and it was great to see this because it feels as if we’re being heard."

Luisana DeGolyer has lived in America for decades after moving here with her family from Venezuela in the '80s, but this will be her first Thanksgiving as a U.S. citizen.

"When my dad came here, he didn’t speak English. He didn’t have any money," DeGolyer explains over the phone. Her parents worked really hard to land on their feet in America. After moving from job to job, her father started his own business, which DeGolyer says is now worth millions of dollars and employs many family members, herself included.

"I live and breathe the family business, so I put a lot of things on the back burner," she says of her decision not to pursue her citizenship until recently. "You put things off because you feel safe. You think 'I was raised here, I’m not going to go anywhere.'" She says her sister is currently pursuing her own U.S. citizenship.

With the uncertainty of the election looming and not knowing who was going to be the next president, "I thought, 'I better do it,' and I’m glad I did," DeGolyer says.

Like DeGolyer, a lot of other immigrants decided 2016 was a good year to make their U.S. citizenships official.

There's been a surge in people applying for citizenship in the wake of the 2016 presidential election, according to the Los Angeles Times. Anti-immigrant rhetoric coming out of the election and deep uncertainty about their future has pushed hundreds of thousands of immigrants to go through the process of becoming citizens.

After living in America for 20 years, Nicola Ward, an immigrant from Scotland, is looking forward to celebrating her first "official" Thanksgiving.

The biggest factor that motivated her to pursue her U.S. citizenship was her daughter.

When you're not a citizen during an election year, Ward says, you look at what could potentially happen to you based on the candidates. Given Donald Trump's anti-immigrant platform, her decision to become a citizen was mostly about "peace of mind" for herself and her daughter.

Nicola Ward and her daughter. Photo courtesy of Nicola Ward.

"If something were to happen, I would potentially go back to Scotland and she would be here with her dad," Ward explains. "That’s always a huge fear that’s in the back of anybody's mind who’s not a U.S. citizen: What happens to my child?"

Ward's newfound peace of mind means she can spend a nice relaxing Thanksgiving with her (very excited) daughter. "She's all about the holidays," Ward says.

While she's thankful for her new citizenship status, Ward says she's most thankful for the opportunity it gave her to cast a vote in the election. "One of my biggest milestones was to say that I actually voted. And even though people say that their vote doesn't count, it did to me," Ward says.

For Alyona Koneva, who finally got her citizenship after moving to the U.S. from Russia 11 years ago, Thanksgiving dinner will be a quiet date with her husband, combining traditions from both of their cultures.

Koneva is in grad school getting her master's in clinical psychology and works as a therapist in a hospital where she talks to a lot of immigrants from low-income communities. Being away from her family has been tough, but at least she has her husband close by.

"He’s Hispanic," Koneva says. "They also have all kinds of different twists on Thanksgiving. So we’ll probably do tamales, we’ll do ham, and we'll do borscht."

"I’m happy that now being an American citizen, I have these rights that I didn’t have" in Russia, Koneva says.

The election is weighing heavily on Koneva's mind, especially when she thinks of her patients. "My heart hurts for my patients and also my fellow coworkers and peers because I feel like [the election is] really going to affect the mental health field." She says there's already a huge need for resources there.

"Just seeing how distraught my patients are and how scared they are, it's pretty heartbreaking," Kovena says, though she's trying to keep an open mind that everything will work out. "I love being able to help people, especially those in need."

"I think [my sister] wants me to make green bean casserole, but nobody ever eats it!" Prakoth says.

Despite cultural adjustments like growing up on pizza seasoned with Indian spices, Prakoth says she loves the United States and has a deep appreciation for the immigrant experience.

"I love living in America," Prakoth says. "I know in my heart that this is the only country that I could live in. This is the culture that I’ve become accustomed to. Even at times when we take it for granted, this is my home."

Whatever thoughts you have about Thanksgiving — that it's the best holiday ever or that it's an awkward, gluttonous ode to genocidal colonialism — we can all take some time to remember our blessings.

Despite the fear and uncertainty weighing on their minds, every single one of these new American citizens easily listed things they were thankful for.

For DeGolyer, it's her children, her health, and her husband's release from prison. For Ward, it's her family and the opportunity to vote in an American election for the first time. Koneva is thankful that whatever the political situation is here, it's not as bad as it is in her native Russia. And Svidler is thankful for his recently born niece.

Finding things to be thankful for when you're scared and facing four years of an unstable, unpredictable presidential administration is no small feat. But just because there are things to be thankful for in a tumultuous present doesn't mean that we should stop working to make our country a better, safer place for everyone to live in regardless of what they look like or what kind of paperwork they have.

So what does it feel like to be a new American citizen at Thanksgiving this year? There isn't one answer. It feels nerve-wracking, frustrating, and confusing. They're looking for answers, solutions, and peace of mind. They're grateful to be with their families and for the ability to exercise their rights. They're feeling cautiously optimistic and hopeful, and they're proud of their country.

On Thanksgiving, they'll do what we all do: They'll keep moving forward, and they'll keep eating turkey.