Kristen Stewart asks Jesse Eisenberg insulting questions to prove a point about sexism in the media. 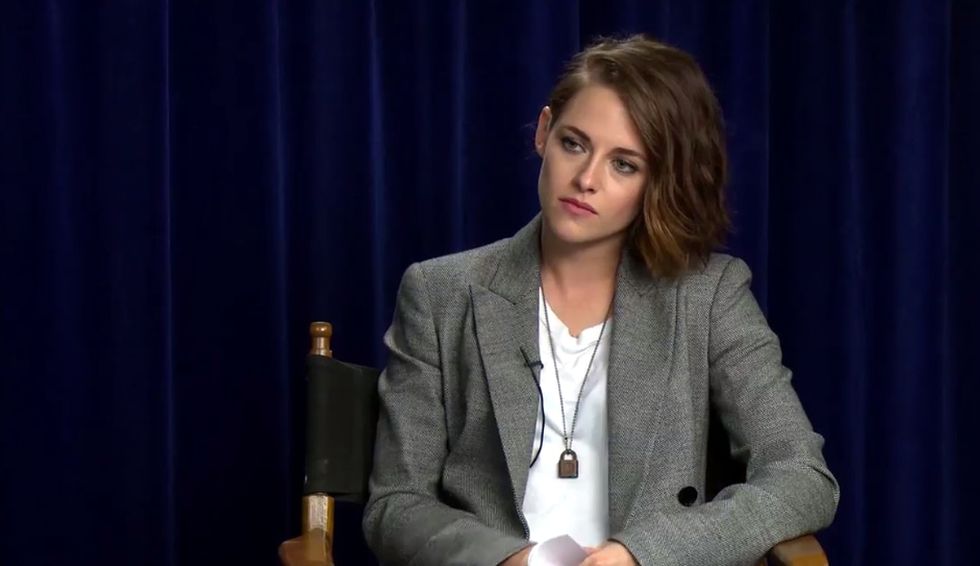 Imagine you can ask Kristen Stewart ANY question you want. Ready? Go!

Here are some reasonable choices:

Sadly, all entertainment reporters seem to care about is:

A person can only take so many questions about Robert Pattinson, am I right?

But this is just the way it is for most actresses. While Stewart's male costars get insightful interview questions about career and craft, women are forced to talk about their latest hairstyle and walk the "manicure runway" — yep, that's a real thing.

But! In a new skit from Funny or Die, Kristen Stewart gets a little revenge by turning these sexist interview questions on Jesse Eisenberg, her costar in "American Ultra."

In the hilarious video, Jesse and Kristen sit down to interview each other, only to find out they've been given each other's question cards.

All GIFs via Funny or Die.

Things get interesting when Kristen starts asking Jesse all kinds of inane questions usually reserved for, well, her.

Stewart moves on to the next question, a classic:

Eisenberg, shockingly, is not with child.

And, of course, no interview of a Hollywood actress would be complete without at least one mention of breasts:

"I just feel like a lot of the questions you're asking me feel like they're ... not about the movie," he says.

There's a difference between trying to humanize an actress and reducing her to the most basic of female stereotypes.

Sticking only to questions about the movie or her career could probably get a little boring, but how about we show a little creativity and insight? How about we go a little deeper than what dress she's wearing or whether she feels like her biological clock is ticking?

Or, at the very least, how about we start subjecting men to the same kinds of vapid interviews women have endured for so long?

If this video with Kristen Stewart and Jesse Eisenberg is any indication, this kind of red carpet equality is long overdue: