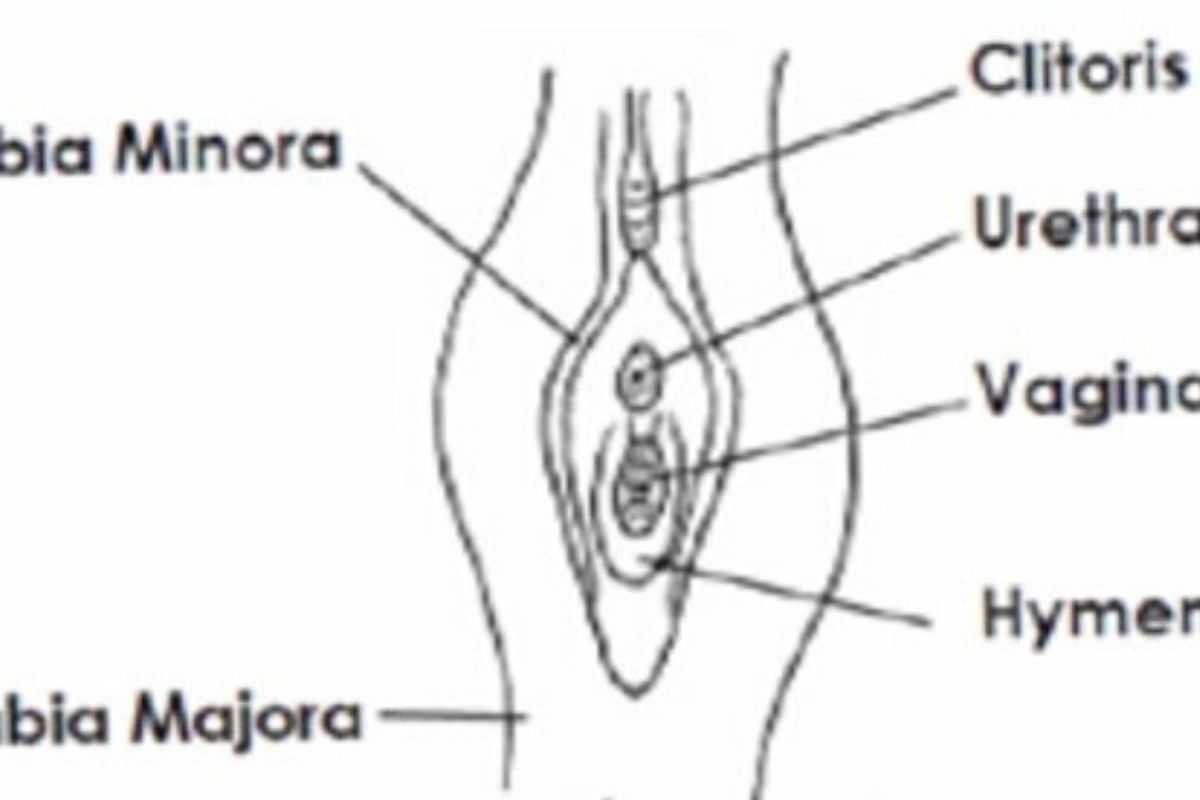 It's incredible how many myths about the female body persist, despite all of us living in the information age. Young and old, educated or not, we're all susceptible to misinformation — especially when the same false info gets shared widely without question or correction.

Exhibit A: The female hymen.

Rapper T.I. made headlines recently with his horrific description of accompanying his 18-year-old daughter to the gynecologist to have her hymen checked. According to him and countless others like him, the hymen is a sign of virginity — a gateway of sorts that indicates whether or not a woman has had sex (or otherwise been vaginally penetrated). Popular belief has it that the hymen is a thin layer of tissue in the vagina that "breaks" the first time a woman has sex, so an "intact" hymen is proof of virginity.

The problem is that's a bunch of anatomically incorrect hogwash.

RELATED: T.I. says he goes to the gynecologist with his daughter to 'check her hymen'

Dr. Verena Brown, MD a pediatrician who specializes in treating child abuse victims, took to Facebook to set the record straight in a now viral post that's been shared nearly 50,000 times. Her post includes a diagram of female anatomy from the Children's Hospital of Minnesota and explains in detail what the hymen — and the concept of virginity — are and aren't.

"With the recent celebrity attention to hymens, I have been meaning to write some thoughts on the matter. For the past 10 years, I have been working as a child abuse pediatrician, taking care of hundreds of girls who have been victims of sexual assault. Those of us in this line of work know a lot about hymens, the female anatomy, and so-called virginity.

So here's my PSA:

Virginity is NOT a physical entity. It is a social construct, a tool by which women have been kept powerless and shamed for centuries.

'But what about the hymen?' you ask. Doesn't it 'pop' or 'break open' when a woman has sex for the first time?

Look at the diagram above. The hymen is simply a thin bit of tissue, a vestigial remnant that sits at the entrance of the vagina. It is absolutely useless (unless you are a guinea pig. Their hymens do regrow for protection and recede when the female is in heat. To quote Todd Akin, female guinea pigs can actually 'shut the whole thing down.' But humans aren't guinea pigs).

Here are some facts about the hymen:

1. The hymen has no purpose. Zero. None. Nada. Contrary to popular belief, it does not serve to help infant girls from getting fecal matter into their vaginas. It does not protect from infections either.
2. Hymens look like hair scrunchies, and much like hair scrunchies, they are stretchy. They stretch to fit a penis and other objects. They really stretch to fit a baby.
3. The hymen is ALWAYS open. Baby girls are born with holes. On rare occasions, girls are born without openings. This is a medical condition called an imperforate hymen, and it requires surgery to fix. There are other variations on hymen morphology as well, such as septated hymens (with extra bands of tissue across the opening), but since the vast majority of women fit into the typical category, I will keep to that here.
4. If hymens weren't open, girls would not be able to have periods. That's why imperforate hymens need surgery to make an opening.
5. Studies show that women who were pregnant and women who have never had sex have identical looking hymens.
6. Only 50% of women bleed at first intercourse. (Beware of technique issues too).
7. If injury does occur to the genitalia from sexual activity (or otherwise), it does not mean that anything got "broken open". The vulva has many parts to it that can be injured (see diagram), not just the hymen. Also, the vulvar tissue is the same as what is inside your mouth. If you bite the inside of your mouth, it may swell or even bleed. But a couple of days later, it will be completely healed. A woman's vulva, and hymen, does the same.

So why is the myth of virginity one worth busting? Well first of all, it's a bunch of BS, and women need to know the truth about our bodies. Secondly, women around the world are still subjected to virginity testing and other intrusive and dangerous practices to prove, ensure, or "reinstate" the mythical virginity. Third of all, this: (trigger warning)

A 13 year-old girl sits on my examination table. Her uncle started raping her when she was 7 years old. I tell her that she looks healthy, and that she is going to be okay. She asks me, 'Am I still a virgin?'

I say yes, and I tell her why.

Because she looks just like any other girl her age. In 95% of cases, the hymen heals completely after an assault.

And because virginity is not a physical state.

It's not something that can ever be taken from you.

It's a concept, a mental and emotional decision you make to give of yourself when you are ready, and not when someone decides to be violent with your body.

And because being raped is not the same thing as having sex. Having sex WITH someone can only happen with consent. Otherwise, it's just violence from one person to another, period.

She cries, her whole body shaking, with tears of relief. Then she dries her tears and smiles for a new beginning.

So let's stop the shame and humiliation. Enough is enough."

Bee added a few notes once her post started making the rounds:

"This post is for information only. It's not meant to be medical advice. Please see your doctor for any concerns about your body.

Also, I have used the terms 'women' and 'girls' in the post, but certainly it would apply to anyone with this type of anatomy, as the topic above would pertain to them as well.

I have seen many folks mention the different appearances of hymens, especially septates and cribiform morphologies. These variations are important to acknowledge. This post is dealing with the most common appearance amongst people with vaginas. This is not meant to take away from the experiences of others. Perhaps I will write more about these morphologies in a new post at some point. Once again, if you have a question about your body, please consult your doctor."

Hopefully this information will help everyone shed outdated and anatomically incorrect notions about hymens, virginity, and women's bodies in general. And it should go without saying that no one should be "checking" anyone's hymen unless a doctor sees a clear and present medical concern. That's abuse, plain and simple.