This real-life hero dove into the child sex slave trade so he could rescue kids from it. 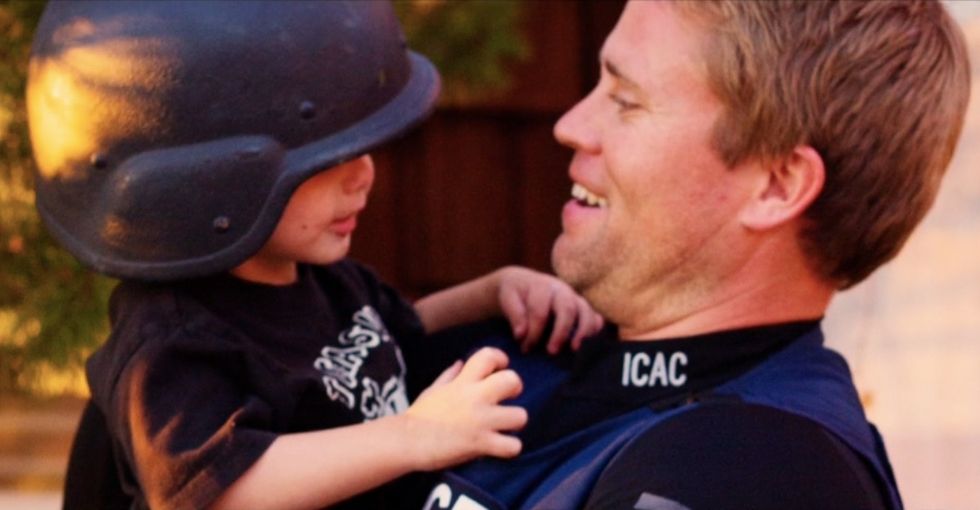 Tim Ballard isn’t a child sex tourist, but he knows exactly how to act like one.

It’s a strange, disturbing expertise to possess, but during his years as a special agent with the Department of Homeland Security, that's what Tim Ballard was trained for. He learned how to infiltrate child trafficking organizations, arrest and prosecute the enslavers, and rescue innocent children from their twisted, wicked grasp. But first he had to create a convincing cover posing as a pedophile.

It’s a job we can all agree is vital and heroic. But it’s also one very few of us would sign up for.

In fact, Ballard himself refused it initially. He was working for DHS at the border in the mid-2000s when a superior asked if he’d help launch a Child Crimes Unit. Ballard had six children and didn’t think he could stomach seeing kids being used and abused in heinous ways. His wife Katherine agreed, worrying about what darkness might creep into their lives.

But the next morning Katherine came to Ballard in tears. “We’re making the wrong decision," she said. "The reason we think we shouldn’t do this is actually the reason we should.”

So Ballard, a man of faith, a doting husband, and a dedicated father of six, agreed to descend into the horrific—and mind-blowingly huge—child sex industry to rescue as many children from it as he could.

Whatever you imagine Ballard has seen, the reality is probably far, far worse.

Diving into the darkest side of humanity isn’t easy. “We started working these cases,” Ballard says, “and they were 1000 times worse than my mind could have conjured up . . . people call it child pornography, but I can’t call it that. It’s child rape videos, and it’s just devastating.”

He wasn’t the only agent who struggled to wrap his mind and heart around this kind of work.

In the beginning, Ballard says, there was little in the way of training materials for infiltrating child sex trafficking operations. In his book, “Slave Stealers: True Account of Slave Rescues Then and Now,” he recounted a story of one of his first undercover simulation exercises:

“I was sitting across the table from one of my undercover instructors, who was playing the role of a criminal smuggler, and I began to engage him in a conversation about how I might purchase children for sex on the black market. My stomach hurt as I brought up the subject, but I fought through it. About two minutes into the exercise, my instructor went silent and turned pale. He stood up from the table and said, ‘I can’t do this. I have a baby daughter.’ Then he walked out of the room . . .”

It’s a totally understandable reaction for a parent. In fact, it was the question foremost in my mind when I interviewed Ballard: Emotionally and psychologically, how do you handle this work?

Ballard is a hero, but he's not superhuman. His humanity drives his work—but also makes it that much more devastating.

The first thing you notice about Tim Ballard is his likability. He's the kind of guy you'd love to have living next door—positive and personable, principled but not pretentious.

He's also brutally honest about the toll this kind of work takes.

When I asked him how he learned to handle seeing the worst of humanity all the time, Ballard said it was really hard, especially in the beginning. Despite regular, government-mandated mental health evaluations, he almost quit several times. He says it got somewhat easier once he learned to stop superimposing his kids’ faces on the faces of the children he was attempting to rescue.

You have to learn to compartmentalize in some ways to do this work, which is a bit ironic, since compartmentalization is also what child traffickers do.

Ballard told a story of an undercover operation in which a trafficker was showing him photos of kids—9 to 11 years old—for sale on his phone. After they finished negotiations, the man said, "I want to show you another picture!" He pulled up a photo of a little girl, about the same age as the others, in a pretty white dress with a bicycle. Ballard asked who she was, and the trafficker told him it was his daughter. "I just bought her this bike for her birthday," he said, "I just love being a dad!"

This proud, doting father sold children to predators for a living, yet had no problem putting his own child into a completely different category.

Ballard says for most child traffickers, it's just business, no different than selling computers or cars.

It's hard to imagine how someone can divorce themselves so fully from their humanity for money. But people who buy and sell children see it as a business like any other. "It's nothing. It's a commodity," Ballard says. "They're so overcome by greed." Most traffickers are men, but there is always a woman involved in a trafficking operation, he says. She is often the one who lures children in and grooms them.

"The scary thing is that they look as normal as anyone," Ballad says. "They’re mostly business people, they’re just out to make money. A child can be sold for 3-4 times the amount that a female adult prostitute would be sold for because of the novelty and demand."

And the demand, Ballard says, is huge. Child trafficking is a $32 billion industry and the fastest-growing criminal enterprise. Today there are 6 million children being sold, mostly for labor or sex.

And the highest demand is right here in the United States. The U.S. is the largest producer and consumer of child pornography, says Ballard. And due to that demand—and the fact that we tend to have money—Americans are child sex traffickers' ultimate clients.

There are basically two kinds of people who buy children for sex, says Ballard.

"The more tragic, but they still need to go to jail," he says, "is people who’ve been abused and who were abused as little boys, and something happens to their minds. Something gets wired into their head about what sex is. So then when they then become a mature adult, they want that sex relationship that they were the victim of at one point."

"And then there’s another group," he says, "which I think is the majority, where they tell me the story—and I’ve heard it so many times . . .'You know, I was 12 years old and I picked up a Playboy, and then all of a sudden one day the adults having sex wasn’t enough, that wasn’t doing it for me. So then I started going into the things that were strange—animals or stuff that was younger. And then I went from 17, then 16, then I tried 14, then 12 . . .'"

Ballard quit his job with the government in 2013 when he realized he could save more kids with his own operation.

Working for the government, there are specific rules and laws about what you can and can't do, what is and isn't within your jurisdiction. After some missions left Ballard helpless to save kids he had promised families he would rescue, he decided he would found an organization that wouldn't be hampered by the government's limitations, so he could ultimately save more kids in more places.

That's how Ballard's non-profit, Operation Underground Railroad (OUR), was born. Named for the secret network for rescuing slaves during the pre-Civil War era, OUR has created a network of former CIA, DHS, law enforcement officers, and more who cooperate with governments and international groups to rescue kids from child slavery. They train local law enforcement in finding and infiltrating child trafficking operations, provide forensic resources and support, and help get kids into vital after-care programs that help them heal from the trauma of their experiences.

One of OUR's rescue stories is being made into a movie starring Jim Caviezel and Mira Sorvino.

There is so much that I've barely even touched on here, including the harrowing, heart-wrenching stories from rescues Ballard has been a part of. One of those stories is being made into a feature-length film staring Jim Caviezel as Ballard and Mira Sorvino as his wife, Katherine. "Sound of Freedom" is currently in post-production. You can watch an interview with Ballard and Caviezel about the film and Ballard's work here:

We all have a role to play in helping battle child trafficking.

I asked Ballard what the average American can do to help with this issue. He gave the example of Harriet Beecher Stowe, who didn't have any specific skills or ability to rescue slaves, but whose book, "Uncle Tom's Cabin," became a catalyst for the abolitionist cause. She used the skills she had to make a difference.

"What’s your skill set?" Ballard asks. "Find an application. Maybe you like to write, maybe you’re a blogger or an activist, you’re involved with politics, maybe you like to put on events and you can do fundraisers for different groups — there’s a skills set you can use and unless and until we all stand up and do it, this isn’t going anywhere."

"This is still the fastest-growing enterprise on the planet. It’s only growing, and the governments of the world are not going to put it down on their own. Everyone has to ask themselves the question, 'What do I do?' And whatever it is, do it, and apply it to this problem."

For more, see the Operation Underground Railroad website. OUR is an Accredited Charity with the Better Business Bureau's Give.org.