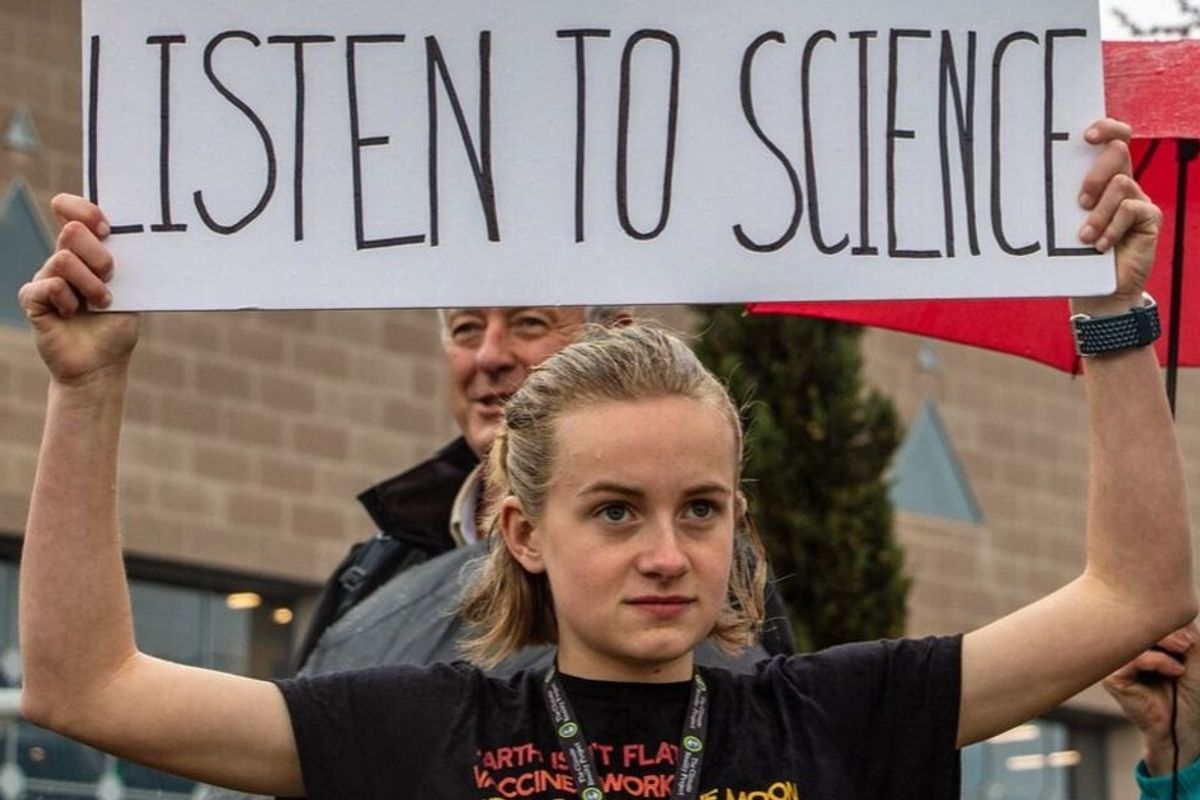 Climate change is happening because the earth is warming at an accelerated rate, a significant portion of that acceleration is due to human activity, and not taking measures to mitigate it will have disastrous consequences for life as we know it.

In other words: Earth is heating up, it's kinda our fault, and if we don't fix it, we're screwed.

This is the consensus of the vast majority of the world's scientists who study such things for a living. Case closed. End of story.

How do we know this to be true? Because pretty much every reputable scientific organization on the planet has examined and endorsed these conclusions. Thousands of climate studies have been done, and multiple peer-reviewed studies have been done on those studies, showing that somewhere between 84 and 97 percent of active climate science experts support these conclusions. In fact, the majority of those studies put the consensus well above 90%.

RELATED: A plaque addressed 'to the future' marks Iceland's first glacier lost to the climate crisis

So why do many people, especially in the United States, deny that climate change is real, perpetuated by human activity, and a serious crisis facing humanity?

There are multiple avenues by which people arrive at climate change denial, some of them more or less whackadoodle than others. Sometimes it's a lack of understanding of how science works. Sometimes it's a philosophical or political stance that supersedes science and reason. Sometimes it's a lapse in logic that leads people to listen to lone voices and ignore what most scientists say. Sometimes it's a misguided belief that questioning anything "mainstream" makes someone a critical thinker—a belief backed up by previously fringe voices who claim that the majority of people are sheep, and that the truth is constantly being obscured by evil forces.

But no matter which climate change denial road you go down, they all ultimately lead to the same kooky but practically impenetrable belief: That the majority of the world's scientists—the people who have made it their life's work to study and understand the world we live in—are part of some huge global conspiracy to control the masses and/or bilk the populace out of their hard-earned dollars.

It doesn't make sense, of course. But there's no convincing them of that.

If you point out to a climate change denier that the majority of scientists agree on the conclusion that climate change is happening, perpetuated by humans, and dangerous, they will point you to an article that explains why the study that came up with a 97% consensus was flawed. If you point out that multiple other studies have come to similar conclusions, just with slightly differing percentages, they'll point to a handful of individual scientists who have said that their work was misrepresented in one of those studies. When you point out that a tiny minority doesn't outweigh the majority, they'll try to point out all the ways that scientists' predictions in the past were wrong, how models are flawed, and how XYZ causes changes in the climate and not humans. When you point to the science refuting those claims, they'll start down the conspiracy theory road, and that's when the whole discussion falls apart.

It happens every time. What begins as a discussion of the science descends into a quagmire of political paranoia and conspiracy theory, which makes reasonable debate darn near impossible. Facts are "fake news." Majority consensus is "media manipulation." Academic arguments are an "agenda." Peer-reviewed publications are "politically-driven propaganda."

Climate change denial cannot honestly be maintained through any significant examination of the science, which is why when you get far enough into discussions with deniers, conspiracy theories always emerge. And at that point, continuing the discussion is an exercise in futility.

What do you say to someone who has decided that thousands upon thousands of scientists worldwide, who have used scientific methods of inquiry and analysis and come up with the same basic conclusions, are all part of some big hoax? What do you do when that kind of lunacy has been repeated by the person sitting in arguably the most influential position on the planet? How do you convince someone to listen to the majority of scientists on science matters, when that should simply be common sense? How do you convince someone who believes that the masses are deluded that they are, in fact, the one who has been duped?

Conspiracy theory thinking is notoriously difficult to undo. I can 100% guarantee that there will be commenters on this post who accuse me of being a shill for some political party, a liberal propaganda pusher, or a fake news proprietor who has fallen prey to the Marxist/communist/socialist/globalist agenda, simply because I wrote an article saying we should listen to the majority of scientists about science. What a time to be alive.

RELATED: Climate change is not a partisan issue. No seriously, it isn't.

Please note that there are some effective ways to debate a science denier, which you can find outlined here. And it is important to do so. But it's also important to recognize that such debates are for the lurking readers' benefit, not to change the mind of the person you're talking to. If they've gone so far down the climate change denial road that they've reached conspiracy territory, there's little chance of convincing them to listen to reason.

Conspiracy theories are like gila monsters—once one has taken hold, it's nearly impossible to get it to let go. Good luck, friends.