A dad explained Trump's words to his sons and made a powerful point about masculinity. 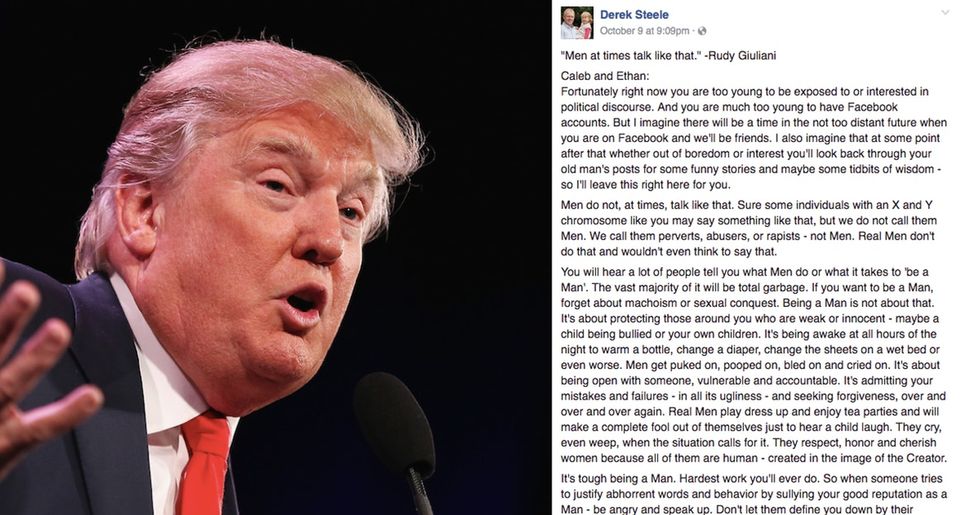 Derek Steele couldn't believe what he was hearing.

Rudy Giuliani was on CNN, trying to clean up Donald Trump's mess after a tape leaked of him making disgusting and violent comments about women.

"Men at times talk like that," Giuliani said. "This is talk, and gosh almighty, he who hasn't sinned, throw the first stone here," he added.

Steele, a Michigan dad of three, including two boys, knew he was witnessing a pivotal moment in political history.

He knew that one day his sons — now 4 and 7 years old — might come across these words on their own. If they ever did, he wanted them to understand a few things about what it means to be a man.

So he went on Facebook and wrote a letter to his sons, Ethan and Caleb, about Trump.

He figured they might be on Facebook themselves one day and would probably get a kick out of scrolling through their dad's old posts.

If and when that day comes, they'd also find this:

"Men at times talk like that." -Rudy Giuliani Caleb and Ethan:Fortunately right now you are too young to be exposed...

Caleb and Ethan:
Fortunately right now you are too young to be exposed to or interested in political discourse. And you are much too young to have Facebook accounts. But I imagine there will be a time in the not too distant future when you are on Facebook and we'll be friends. I also imagine that at some point after that whether out of boredom or interest you'll look back through your old man's posts for some funny stories and maybe some tidbits of wisdom — so I'll leave this right here for you.

Men do not, at times, talk like that. Sure some individuals with an X and Y chromosome like you may say something like that, but we do not call them Men. We call them perverts, abusers, or rapists — not Men. Real Men don't do that and wouldn't even think to say that.

You will hear a lot of people tell you what Men do or what it takes to 'be a Man'. The vast majority of it will be total garbage. If you want to be a Man, forget about machoism or sexual conquest. Being a Man is not about that. It's about protecting those around you who are weak or innocent — maybe a child being bullied or your own children. It's being awake at all hours of the night to warm a bottle, change a diaper, change the sheets on a wet bed or even worse. Men get puked on, pooped on, bled on and cried on. It's about being open with someone, vulnerable and accountable. It's admitting your mistakes and failures — in all its ugliness — and seeking forgiveness, over and over and over again. Real Men play dress up and enjoy tea parties and will make a complete fool out of themselves just to hear a child laugh. They cry, even weep, when the situation calls for it. They respect, honor and cherish women because all of them are human — created in the image of the Creator.

It's tough being a Man. Hardest work you'll ever do. So when someone tries to justify abhorrent words and behavior by sullying your good reputation as a Man — be angry and speak up. Don't let them define you down by their conduct. In short — be a Man.


Steele is right about one thing: This whole "locker room talk" thing is way bigger than Trump.

But Trump's words are likely a product of other harmful ideas about men that are, sadly, more widely held. That you can measure a man's worth by how many women he's slept with. That being a loving, caring parent is something only women do. That real men don't show their emotions.

We need more and more good men like Steele to speak up, so the next generation knows the most important part of being a man is being a good human.