6 years ago, locals saved this BBQ joint. It returned the favor after Hurricane Matthew. 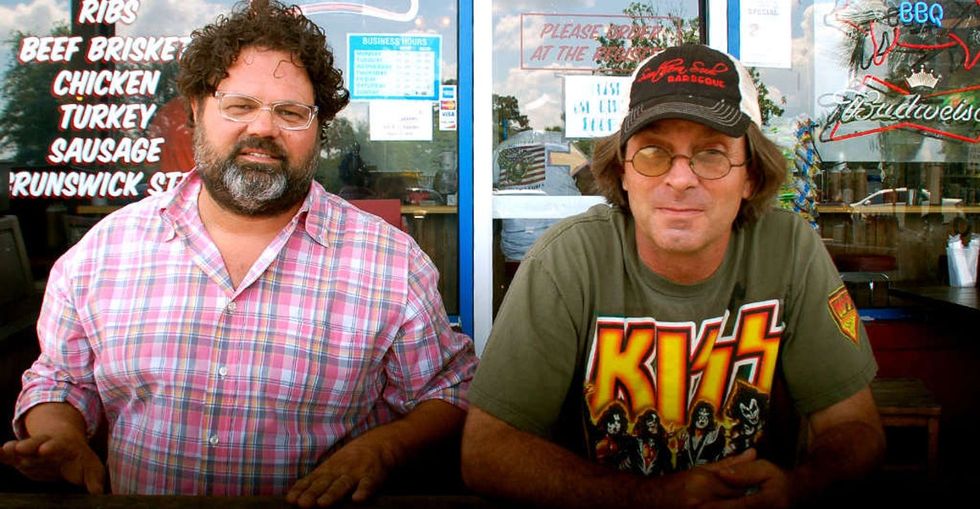 The morning after Hurricane Matthew roared through St. Simons Island, Georgia, golfer Davis Love III drove over to his neighbor's house with a chainsaw.

"We’re on the marsh, and he rode [the storm] out and kept an eye on both houses, and I had to take the chainsaw just to get him out of his drive," Love said. "It’s just been nonstop."

Love, a PGA Championship winner and captain of the United States Ryder Cup Team, was one of hundreds of local volunteers and professional emergency service personnel assisting in the clean-up effort on St. Simons. The island was spared the worst of the storm — no injuries or deaths were reported — but the high winds played havoc with the sleepy beach community's trees, uprooting giant oaks and launching limbs onto the canopied streets and into power lines.

"I’ve been here 28 years, and this is the worst [storm] I’ve seen here on St. Simons," Glynn County commissioner Dale Provenzano said. The downed lines resembled a tangle of necklaces in a jewelry box, knocking out the power for the few dozen residents who stayed and forcing emergency crews to work around the clock to repair them.

But in the midst of it all, there was barbecue.

Six years ago, Harrison Sapp stormed into Southern Soul BBQ cursing at his customers, yelling at them to run. No one believed the restaurant was on fire.

"We watched it. We all watched it," Sapp said. "Us, the fire department, and everybody. We just watched it burn to the ground. ‘Cause there was nothing that could be done. We all thought we were done."

The timing could not have been worse — not that there's ever a good time for your restaurant to burn down. Sapp had just filmed an audition for "BBQ Pitmasters." "Diners, Drive-ins, and Dives" had stopped by a few weeks before. The partners were convinced the restaurant was on the edge of breaking through. The fire, they thought, would put an end to all of that.

Even before the flames extinguished themselves, the restaurant's wall was full of expressions of disbelief, declarations of sympathy, prayers, proclamations of love, and offers to raise money.

"Somehow, we had just become part of the community, you know, and everybody over here was family," Sapp said.

Southern Soul kept operating — first out of a tent, then a trailer. Local restaurants held fundraisers. A man on a bicycle rode up and wrote them a check for $35,000. "Pay me back when the insurance pays," he told them. Six months later, they were up and running again in a new building.

"I think ever since then, they’ve felt like they need to give back as much as they can," Love, a part-owner of the restaurant, said.

At 7 a.m. on Oct. 8, 2016, a few hours after Matthew had moved off the coast, Jerry Nardell, a childhood friend of Sapp and Bufkin's who works as a bartender at a nearby restaurant, rode his bicycle down to Southern Soul to charge his phone.

Unbeknownst to him, a Georgia state patrol officer had escorted Sapp back onto the island early that morning with Bufkin half an hour behind him. Their staff had prepped the smoker the night before.

"We just promised that we would basically be back, we would be there to serve first responders," Sapp said. "No matter what happened, we would come back."

Inside the restaurant, mountains of brisket, ribs, and pulled pork sat cooked and ready to heat. The crew set out aluminum trays and lit Sterno candles underneath. Nardell jumped on the buffet line.

He stayed there until 11pm.

Another friend, Lance Williams, who left Southern Soul to start Mallery Street Cafe in downtown St. Simons, pulled up to offer his help. Within minutes of arriving, he was in the kitchen, cutting and pulling meat.

"I just showed up and grabbed an apron, you know? I know what to do," Williams said.

Southern Soul put out the call to emergency workers and first responders on the island — first through word of mouth, then on social media — that lunch was available free of charge. They came in groups: local police, firefighters, state police, power company workers, Homeland Security officers. It was organized chaos, but the line kept moving.

"They just kept food rolling out until we pretty much ran out," Nardell said.

The next day, the crew at Southern Soul expanded the food service to include locals who stayed on the island.

Sapp, who had previously ridden out storms in South Carolina, Hawaii, and Oklahoma, knew how restorative a hot meal could be to those left behind.

Williams recalled running food to an elderly man who no one could reach.

"He’s a 94-year-old man that has dementia and they couldn’t get a hold of him," Williams said.

While emergency crews were untangling power lines and clearing tree limbs off the roads, local volunteers met at Southern Soul in the late morning to coordinate assistance efforts.

"One of the neighbors had gotten in touch with me to ask if I could check on their chickens, so I got into their backyard, climbed their fence, and fed their chickens," said Kirsten Hawkins, Southern Soul's general manager, who made tea and helped serve.

Meanwhile, Love and others drove around checking on the homes of residents who had evacuated and cutting away trees that were blocking driveways.

"We were actually joking that we’d declared martial law, because we could go around the roundabout the wrong way and drive as fast as we wanted," Love said.

Provenzano credits Southern Soul, along with a number of other local restaurants that stayed open, for helping the recovery effort run smoothly and allowing emergency workers to stay on the island through mealtimes, instead of having to travel to a staging area on the mainland.

A previous storm in 1999, he explained, forced the island to evacuate without a plan, and clean-up efforts chaotic and disorganized. After Matthew, most of the island's roads were clear and lights were back on within 96 hours.

"If you had told me that we wouldn’t even have power crews on the island until mid-day Saturday, and that all the customers would have their power restored by Tuesday night, I’d have said there’s no way," Provenzano said. He praised the power company employees for working non-stop, the police for keeping the proceedings orderly, and the local volunteers for filling in the gaps.

Sapp said he and Bufkin were duty-bound to play a small part.

Southern Soul resumed regular service on Monday night. On Tuesday, Love and his crew stopped by for dinner.

The golfer was exhausted from clearing when the chef approached his table and asked what he was doing next.

The smoker. Photo via Southern Soul BBQ/Facebook, used with permission.

The chef led him around back to a cement mixer. After a long few days, blending spices was therapy.

"That’s us. We cook barbecue, you know?" Sapp said.