9 ghostly photos provide a powerful look back at World War I.

The world as we know it is a fragile thing. These photos provide some needed perspective. 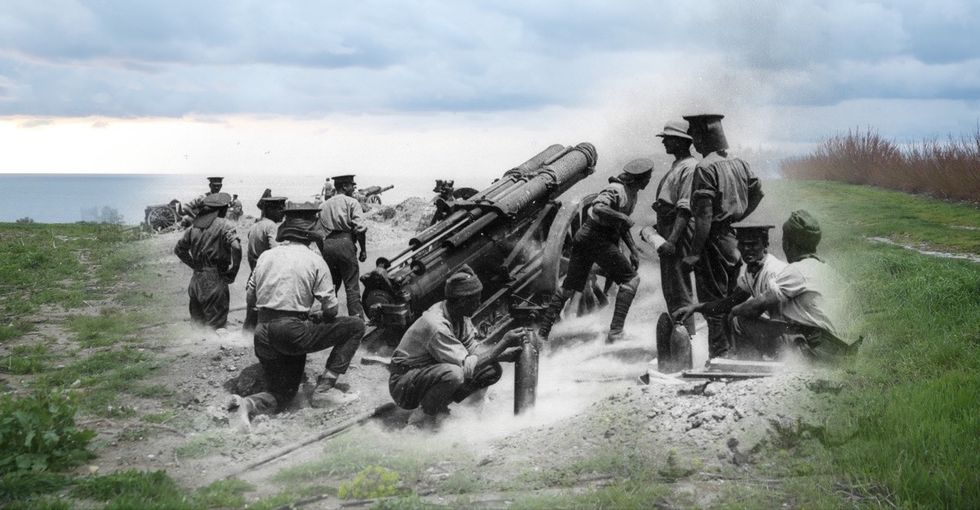 A photo series commemorating World War I's centennial merges pictures from the modern world with overlays from the war.

The result is a stunning, beautiful, and somewhat ghostly look at the past.

One of the bloodiest conflicts in all of human history, millions of people lost their lives because of World War I. And while the United States didn't officially declare war on Germany until April 1917, it's estimated that more than 53,000 American soldiers lost their lives in battle.

WWI may be a century behind us, but these photos — which show the very same locations that once saw tanks and soldiers in the streets still standing today — are a reminder that 100 years is really not that long ago at all.

An MKIV tank rolls down the streets of London in this mash-up photo combining a shot from November 1917 and the same location in July 2014. Photo by Topical Press Agency/Getty Images (1917), Peter Macdiarmid/Getty Images (2014).

The photo series does a spectacular job highlighting the fragility of the status quo and giving a look into how quickly things can take a turn for the worse if we're not careful.

Injured soldiers are shown here at the Brighton Pavilion, which was converted into a military hospital in 1915. Photo by Hulton Archive/Getty Images (1915), Peter Macdiarmid/Getty Images (2014).

With conflict and potential conflicts abounding — whether it's intervention in Syria, North Korea, or something else entirely — it's just as important as ever to seek out peaceful solutions and diplomacy before beating the drums of war.

The ghosts of World War I can teach us a lot. As can those of World War II and other campaigns. It's important that we remember there's a steep cost to war — financial, structural, and most importantly, human — and before rash decisions are made leading us into a new battle, we should reflect on the past and ask if it's worth it.

German prisoners of war during the First World War on their way to Southend Pier in 1914. Photo by Topical Press Agency/Getty Images (1914), Peter Macdiarmid/Getty Images (2014).

Constant war is a surefire way to desensitize people to the toll of the violence countries can inflict on each other. These photos are a powerful reminder of what's at stake.

So use these photos as a reminder, share them with others; let's never forget the courage of those lives lost to battle, but let's also never stop working to minimize future losses and make sure photos like these don't happen again in full color.

Shortly after taking office, President Biden got to work selling Congress and the country on a massive coronavirus relief package. One of the centerpieces of what would become a $1.9 trillion dollar bill was raising the Child Tax Credit (CTC) from $2,000 to $3,000 per child (or $3,600 for a child under age 6) and making it refundable.

The president made a bold statement while talking about the CTC that seemed a little far-fetched at the time. "If we get this done, it will cut child poverty in half," Biden said at a roundtable in February. The White House stood by the claim with Press Secretary Jen Psaki repeating it in three separate beings.

Keep Reading Show less
poverty
Get stories worth sharing delivered to your inbox
By signing up you agree to Upworthy's privacy policy.
Trending Stories
Planet