7 ghostly before-and-afters from WWII London remind us of the cost of war. 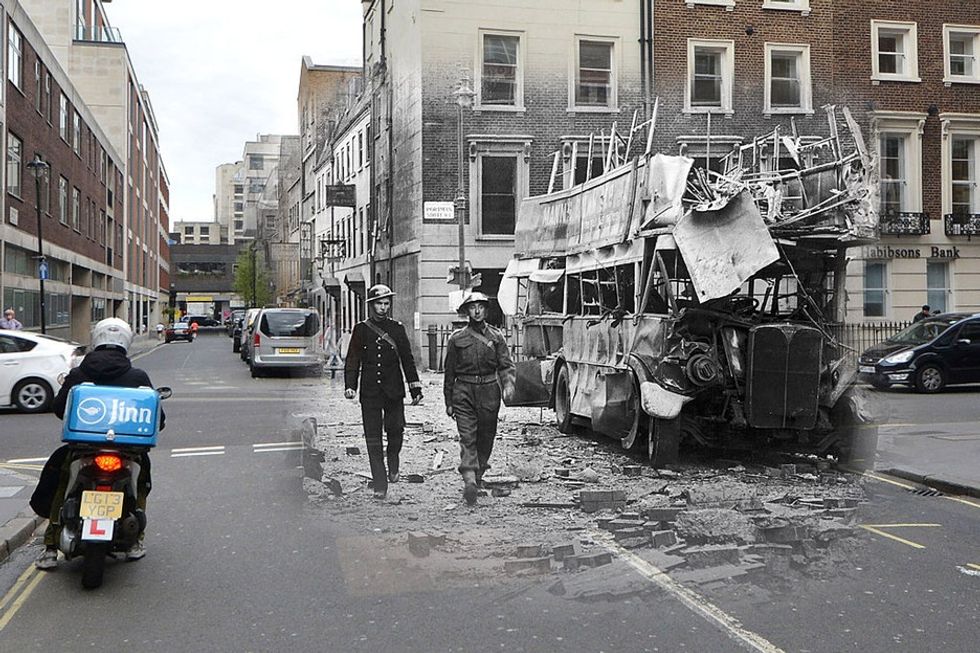 In September 1940, Germany began a bombing raid on London that lasted 57 consecutive days. The attacks on London, and surrounding areas, would continue until May 1941.

Known as "The Blitz," it was one of London's bloodiest chapters in World War II. Tens of thousands of people died, and about a third of the city was destroyed.

Many of those who survived did so by hiding all night in underground stations and tunnels — listening to the bombs crash overhead and hoping their world wasn't about to come crashing down on them.

Today, of course, London is a bustling metropolis with skyscrapers and five-star restaurants.

But the city's wartime history can still be seen if you know where to look.

In the photo series below by photographer Jim Dyson, images of today's London have been overlaid with pictures of the destruction from WWII in the same locations, marking the passage of time as well as the healing of scars.

From a crater in the middle of London's major thoroughfare...

...to a bombed-out bus in Harrington Square shown as a modern-day bus approaches the same station.

This crater was once directly in front of Buckingham Palace, which was bombed on Sept. 13, 1940.

The Surrey Docks were also bombed, creating a massive plume of smoke over the River Thames.

On May 11, the world will commemorate the 75th anniversary of the end of the Blitz.

Like most reflections on war, this anniversary comes with a mixture of feelings. While the streets have been repaved, the buildings rebuilt, and the buses and cars replaced, some scars remain — a reminder the war wasn't as long ago as it might feel. It was in people's current lifetimes.

There are still bomb shelter signs visible on London street corners, pointing people to safety. You can even visit the old stations that people used to hide in with their families as they prayed to make it through the night.

Down Street station in Mayfair, which operated as a bomb shelter in 1940. Photo by Dan Kitwood/Getty Images.

Christ Church Greyfriars, a church in London that stands in the shadow of St. Paul's Cathedral, is still a skeleton of its former self. Only a bombed-out wall and recently restored steeple remain.

As time moves on and we get further away from the visual reminders of these moments in time, it's important to occasionally look back and remember where we came from.

Some scars fade and some remain, but they'll always be part of us.