The first openly trans man is graduating from Spelman. Here's his incredible story. 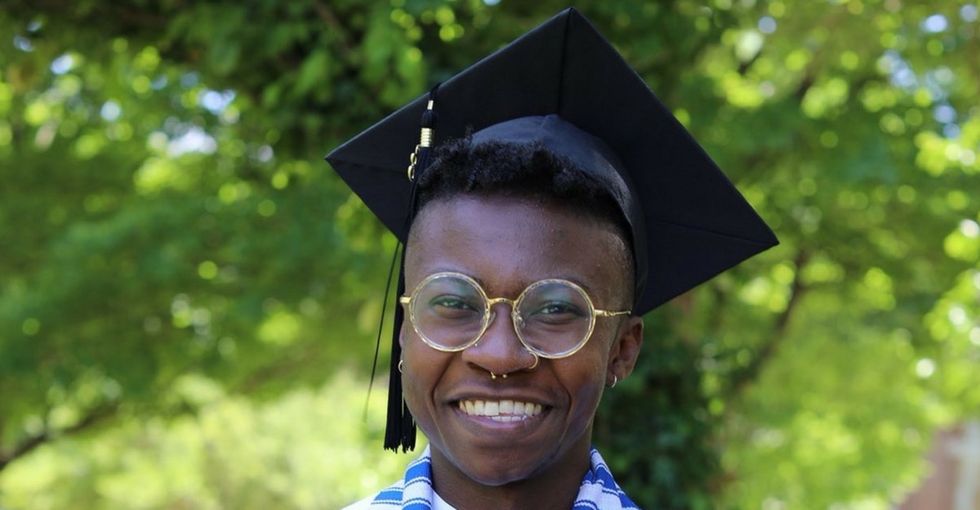 Keo Chaad O'Neal says that he is the first openly trans man to graduate from Spelman College, one of the most well-known single-sex historically black colleges (HBCUs) in the nation.

In a social media post that's now gone viral, O'Neal stands proudly in a Spelman stole, grinning from ear to ear. The response to his accomplishment was profound.

O'Neal's undergraduate journey was not a linear one. He transferred out of Spelman, an all-women's college, to a predominately white institution (PWI) because he couldn't be his "full queer self." Though O'Neal initially found women who encouraged him to be live authentically, he found himself constantly having to choose between being queer and being unapologetically black.

"I felt like no matter what, I was sacrificing a part of myself, so then it came down to which fight I wanted to fight," says O'Neal. "This became one of those instances where you have to choose your race over your sexuality which, unfortunately, a lot of QPOC (queer people of color) have to do."

O'Neal's choice is all too relatable for many queer black kids navigating higher education spaces.

Some institutions normalize blackness, while others normalize queerness. It's rare for kids of color find a place that affirms both.

Intersectionality, which describes overlapping and interdependent systems of discrimination or disadvantage — such as race, gender, and sexuality — is something that many queer black kids grapple with in society. Having various identities, all of which are discriminated against in compounding ways, can be a heavy burden.

Being unapologetically black and queer shouldn't be mutually exclusive, but for many black youth, it is.

Fortunately, O'Neal had a support system that gave him the confidence to transfer back to Spelman and be himself there, each and every day until he graduated.

Particularly helpful to O'Neal were Dean of Students Fran'Cee Brown-McClure and the Spelman Wellness Center's Coach Makeba Reed-Johnson. "I wouldn't have been able to finish out at Spelman if it were not for them," says O'Neal. "They defended, protected, and extended themselves to me."

He also found a supportive network of friends, including Spelman junior Abeo Chimeka-Tisdale.

"I think that Keo's graduation is important to the atmosphere at HBCUs because it shows that there is a place for us at the institutions, even if we have to create that space for ourselves," Chimeka-Tisdale says in an email. "It shows that even when these institutions try to erase or ignore us, we can persevere and thrive on our own."

O'Neal's support network serves as an example for other institutions looking to create a more inclusive student body.

In September 2017, Spelman announced that it would admit transgender women, becoming one of many colleges around the nation revisiting admissions policies as it pertains to trans and nonbinary students.

Though encouraging, admissions policies are just the beginning of true change. Single-sex college campuses must work to foster environments that make queer and trans students feel safe and included in the student body. The necessary shift is slowly in the works, particularly in the black community, according to O'Neal.

"Since my coming out, people are a lot more curious and a lot more willing to learn about sexuality and gender and more importantly, learning the difference between the two," he says. "I find that people are a lot more genuine when talking to me about queerness because they really just want to understand, which is something I never got my freshman year."

Working toward systemic change is no easy undertaking. But O'Neal says that starting with yourself, your campus, or your community — even if it's hard — is the best first step.

"Sometimes you have to carve out your own spaces to exist, and that is OK, but do not allow anyone to put you in a corner," O'Neal says. "Let people feel the weight of who you are and let them deal with it."