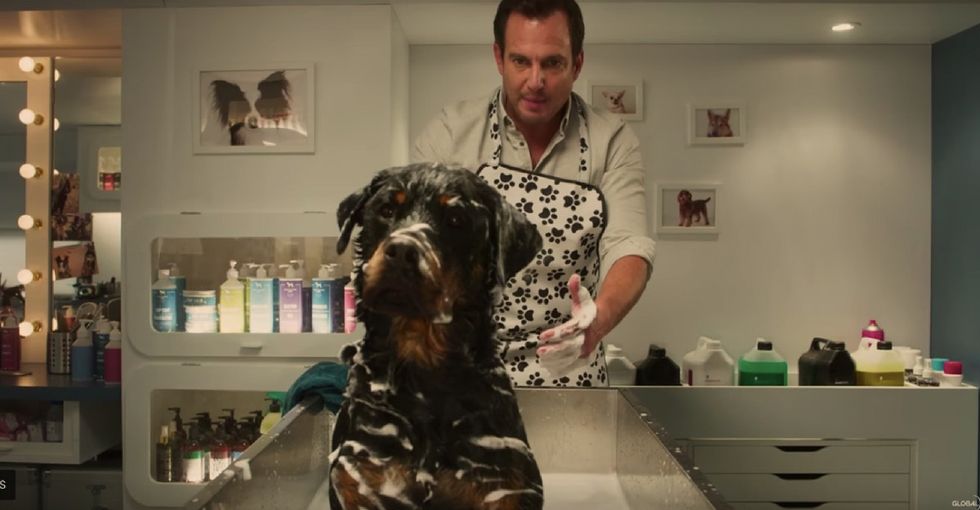 Parents voiced concerns about a kids movie. And the studio distributing it ... listened.

Social media was blowing up with reviews of "Show Dogs" — for a disturbing reason. Reviewers and parents alike voiced concerns about whether the PG-rated kids' film "Show Dogs" was subtly conditioning kids to be groomed for sexual molestation. Yes, really.

Thanks to continuous feedback from people across the country and a candid statement from the National Center on Sexual Exploitation, the movie executives decided to make a change. In a statement issued May 24, 2018, Global Road Entertainment states:

"Responding to concerns raised by moviegoers and some specific organizations, Global Road Entertainment has decided to remove two scenes from the film 'Show Dogs' that some have deemed not appropriate for children.

The company takes these matters very seriously and remains committed to providing quality entertainment for the intended audiences based on the film’s rating."

What started all the controversy?

In the film, an anthropomorphized police dog named Max (played by Ludacris) goes undercover at a dog show to gather intelligence on a crime. As part of the operation, he has to prepare to compete in a dog show.

One of the requirements of the show is an "inspection" of a dog's "private parts" by the judges. While rehearsing for this part of the show, Max is uncomfortable and says so. His trainers coach him on how to go to a "happy/zen" place while it's happening so that he can get through it. He resists at first, but by the time the show comes around — with everything riding on his ability to get through the inspection — he successfully disassociates from the fondling as viewers get a look at his happy place.

Parents and child advocacy groups alike voiced their concerns over the scenes.

Terina Maldonado at Macaroni Kid wrote, "During the movie, I kept thinking, 'This is wrong, it doesn't need to be in a kids movie. Everything else in the movie is good fun except for this.' Afterward, my husband mentioned that he picked up on this message too, as did my mother who saw the movie with us. My daughter, on the other hand, said her favorite part of the movie was when Max got his privates touched and the funny reaction he had."

And therein lies the problem. It's not that kids will recognize that there's a problem with the scenes — it's that they won't. They'll giggle about how it's uncomfortable to have your privates touched, and then get the message that "going to happy place" is a good way to deal with that discomfort.

Dawn Hawkins, executive director for the National Center on Sexual Exploitation spoke up about the film. "The movie 'Show Dogs' sends a troubling message that grooms children for sexual abuse," she said in a statement. "It contains multiple scenes where a dog character must have its private parts inspected, in the course of which the dog is uncomfortable and wants to stop but is told to go to a 'zen place.' The dog is rewarded with advancing to the final round of the dog show after passing this barrier. Disturbingly, these are similar tactics child abusers use when grooming children — telling them to pretend they are somewhere else, and that they will get a reward for withstanding their discomfort."

Initially, the movie makers released a lukewarm apology statement that led many to believe they didn't really see the problem.

The original statement released by the filmmakers read, "It has come to our attention that there have been online discussion and concern about a particular scene in Show Dogs, a family comedy that is rated PG. The dog show judging in this film is depicted completely accurately as done at shows around the world and was performed by professional and highly respected dog show judges. Global Road Entertainment and the filmmakers are saddened and apologize to any parent who feels the scene sends a message other than a comedic moment in the film, with no hidden or ulterior meaning, but respect their right to react to any piece of content."

It has come to our attention that there have been online discussion and concern about a particular scene in Show Dogs, a...

Their initial response was not an apology nor did it take accountability; however, they did seem to step back, realize the merit of these concerns, and take action.

While their eventual response was to take action, it remains concerning that it wasn't caught or changed sooner. In the age of #MeToo, where sexual assault has been a hot topic of conversation and education, it's unfathomable that no one in the final production of this film would have recognized the issue or pointed it out before the film's release.

Update 5/24/2018: This post was updated to reflect new action taken by the movie distributor that took place after original publication.