Gay men gave straight guys relationship advice and they'd be dumb not to follow it. 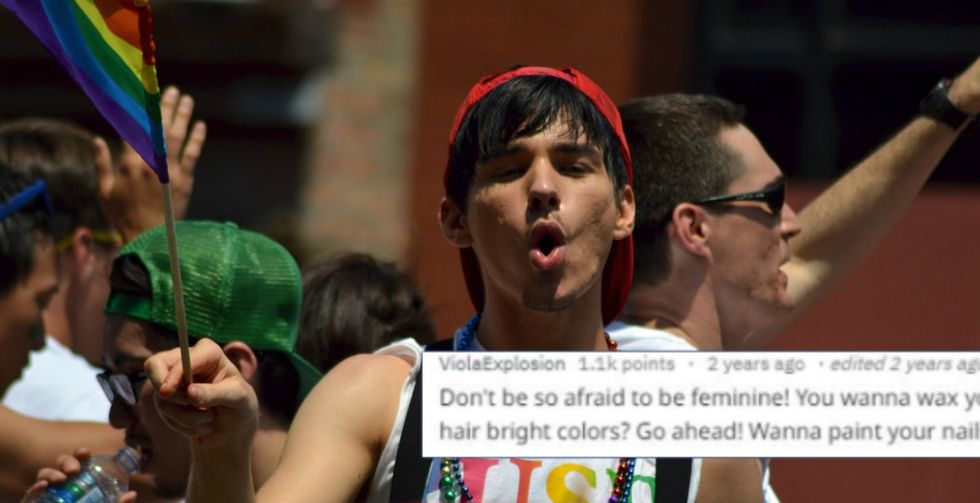 ​Gay men have a unique view of the straight man’s world.

They know what makes a man attractive and they're also guys, too.

Gay men also tend to form deeper friendships with straight women, so they get the inside scoop on what they really want from relationships.

According to a recent question posted on Reddit, gay men and straight women often want the same thing: a guy who’s  emotionally available and reasonably well-dressed.

To help straight men with their relationships and life in-general, Reddit user OurOhnlyHope posed the question “Gay Men of Reddit, what advice do you have for Straight Men of Reddit?” on the online forum. Since it was first posted, the thread has received over 11,000 responses.

That's a lot of advice, so here's here’s 12 of our favorite gems.

As long as a gay friend isn't crushing on you, we're really good at helping you figure out if a girl is right for you or if you're just blinded by pussy. We have a special ability with hot women called, "You have no power here!" and we find out very quickly which ones become hell to deal with if they can't wrap you around their finger. Our opinion also isn't shaded by female politics as a female friend's can be.

I saw so many friends in college chase after girls that were completely wrong for them, just because of their looks. Gay men totally do the same thing when it comes to other men, so we can use your help as a filter as well.

2. It's important to stretch.

Flexibility and stretching is really important for good blood flow. Improving this part of your life will definitely improve your mental capacities and give you more energy. A study has shown that women find men who stretch more attractive.

The best way to stretch is to use one hand to grab the other wrist and raise your arms above your head and stretch to the sky. Hold the stretch for 10-15s. Feel free to add a little sway to either side. The stretch is best accomplished when wearing a loose-fitting shirt that exposes the midriff during the stretch. As a matter of fact, it's really best done shirtless and in a public setting, preferably ending the stretch with a few pelvic thrusts.

Just remember that if it doesn't work to get your blood flowing...well, it will work for me. ;)

3. It's OK to express your emotions.

As a gay man, I just want to say that it's ok to express your emotions.

I cannot tell you how many times my brother's girlfriend would come up to me going, "Did I do something wrong!? He's so... quiet lately!" and me replying, "Nah, he had a bad day at work and is a bit stressed."

It's also ok to discuss your feelings and may even help your relationship with a significant other.

Too many men today put their feelings in an air tight container and end up losing part of themselves, yet feel it's the right course of action to preserve their machismo.

4. Flirt with no agenda.

Try to stop worrying too much when interacting with women you fancy; I've known a fair few of my straight friends incapable of flirting with women, whereas I've had to turn down the same women without even realising I was seeming flirtatious because I was just talking to them as I would anyone else without any agenda.

DON'T, and i can't put enough emphasis on this, DO NOT consider yourself so desirable that every gay guy will try to suck your dick every chance he gets.

You have no idea how many bloated, ugly as fuck straight guys reacted somewhere in the lines of 'Oh, you're queer? Thats okay, as long as you don't grope me.' when they figured out i was gay. Take a fucking honest look at yourself. You (probably) are very average looking, and implying that any gay guy wants to jump you is offensive as fuck.

Also, take care of your fingernails. Get a manicure once in a while. Hands are sexy.

6. Be confident, not creepy.

This thread needed a serious tag. I'll offer my best as I have lots of girlfriends that discuss this stuff with at times.

1. Dress nice. (You may think sweats are cool but ladies notice when you dress nice. Jeans, a nice pair of shoe, and a fitted tee or button up can really raise your stock with the ladies.)

2. Clean up. (Personal hygeine is key. Shower and deodorant. We guys sweat and can stink. A good cologne will make the ladies swoon. Also guys you can moisturize, lotion is fine. Lastly a nicely groomed beard is a good thing.)

3. Don't stereotype us. (Gay men come in all shapes and sizes and have a variety of interests.)

4. Be confident, not creepy.(I have seen so many good looking guys totally blow it when hitting on my friends.)

5. We can be friends. (I have lots of straight guy friends but some guys are so afraid to befriend me. Just cause a guy is gay doesn't mean he is interested. If I want to get laid I would sooner check Grindr than hit on a straight guy.)

Edit: Wow this blew up. More tips since you guys asked.

2. A few people mentioned brush your teeth if you have to be reminded to do this you are beyond help. Cologne is tricky. We all have a natural scent so find one that mixes well with you. Go to Sephora or any major department store find an employee ask if they can help. Sometimes these people work on commission so they will be eager to help but don't let them force anything on you. I never buy the same bottle twice, but that's just me. There are so many. Gucci Guilty, Dior Homme, Kenneth Cole Black, Dolce and Gabanna Light Blue,Bleu De Chanel, YSL, way too many. Calvin Klein offers a good affordable variety. A few last tips. Don't use anything that smells like your uncle Bobby. Also don't spray the whole bottle, focus on key areas. Neck, chest, wrists.

3. Confident not creepy. Example my friends and I are dancing, you grinding up on one of them from behind is creepy. Don't be pushy be polite. Offer to buy her a drink. Ask her to dance. Guys sometimes a girl just wants to go out and chill so don't take it personal if she declines your advances. Other times she wants to get laid so spark up a conversation and see where that takes you.

7. Don't be afraid to be feminine

Don't be so afraid to be feminine! You wanna wax your eyebrows, go ahead, you're not less of a man. Wanna dye your hair bright colors? Go ahead! Wanna paint your nails? Go ahead. Wanna wear a skirt? Go ahead! Your manliness is decided by you, not your lack of femininity.

8. Don't be afraid of beautiful women.

We are not intimidated by beautiful women because we have nothing to lose. We have invested nothing in her until we start talking to her. By that calculation, there is absolutely no reason not to approach a beautiful woman at a bar, a party, or some other social gathering.

Don't be a douche. Don't think you have more to offer. Just realize that any person you meet at any moment in time presents the opportunity to achieve a relationship with an equal.

I guess this is more... reassuring? But we hear a lot from your girlfriends. Like, a lot. If we're close, she'll tell us the whole story. And one thing I've learned from woman I know/hardly know/have literally met that night, it's that dick size doesn't matter. Most women and gays would much prefer a guy who knows what he's doing than someone who just sits on his high horse because his dick's above average. And yeah, there are size queens, but they aren't important.

If you send nudes to a female who has a gay best friend, he's seen your dick.