A letter to my grandpa and other fathers of the fatherless.

Know that you simply cannot ever know how much you’re doing just by being around. 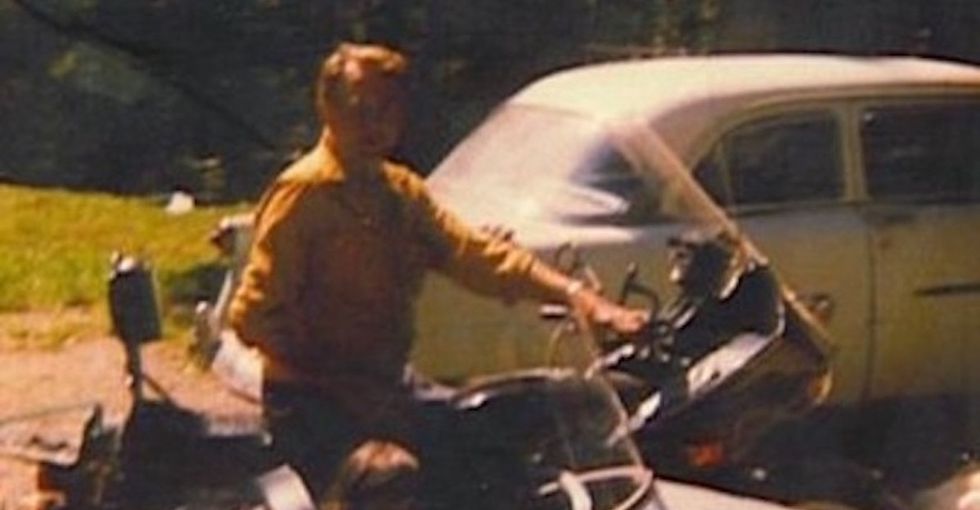 We almost bit it, right there on a Minnesota gravel road.

My grandpa had taken me out for a summer afternoon ride on his motorcycle, a Honda, and it had been a wonderful excursion of warm, sunny freedom. I enjoyed the wind rushing past me, how strangely heavy my head felt on top of my neck with the helmet around it, and feeling like one mass moving in unison: me, my grandpa, and the motorcycle.

I was 12, and I’d been going for motorcycle rides with him since I was little, at first in sidecars, and later on (I don’t remember the exact age), on the actual bike. It was always a little scary, but I’d beaten back thoughts of trepidation many times, and nothing bad had ever come of those rides.

I don’t think we were headed anywhere in particular that day. We were just enjoying being alive.

But something happened on the gravel road. I still don’t know what it was. It wasn’t a curve in the road or anything jumping out in front of us, but something just gave way in the dusty gravel beneath the tires and the bike got all swervy. It tilted for just a second or two, and then grandpa got it under control again. We were fine. We were alive.

But I think it scared him more than he let on. We took the truck everywhere for the next couple of weeks.

We were spending the summer together in Backus, Minnesota, that year.

We lived in southeastern Wisconsin  —  he and my grandmother, a few of my youngest aunts, and my little cousin  — in the house he built while he worked at American Motors. But he was retired by that summer, and he liked to go up to his little plot of land in Minnesota from time to time to get away.

During this particular summer, my grandma put my aunt in the driver’s seat of her trusty car, packed me and my little cousin and my two other aunts in with her, and sent us off to surprise my grandpa in Minnesota during his alone time. Truth be told, I’m pretty sure she thought he had a woman on the side and wanted us to either catch him at something and report back or just throw a wrench in his enjoyment.

We didn’t catch him at anything. We got there, and he was surprised but happy to see us. We all stayed in the trailer he had on the little plot of land. We tucked away in various bedrooms and sleeper sofas, and we spent a week there with him.

I was having so much fun that when the week was up, I didn’t want to go home with my aunts and cousin. If we’d cramped his style at all, he certainly set it aside because he had no qualms about me staying there with him for the rest of the summer.

It’s an amazing feeling, to be welcomed as part of someone’s “alone” time.

For someone you really like being around to basically say, “I can have you around and still be alone.”

To this day, I still feel like that’s the best kind of companionship (and it’s the same kind I enjoy with my kids, too).

We played cribbage and war at a round maple table in the trailer kitchen that summer, a table sometimes covered with crumbs from saltines or ashes from his cigarettes.

I’d pull ticks out of the dog and we’d snuff them out in the ashtray. We went fishing at 5 a.m. on Pine Mountain Lake, with a thermos of black coffee that we shared and canned meat spread that we’d eat on crackers.

We’d bring home what we caught, clean it, fillet it, and pan-fry it for dinner. We’d visit his relatives on a farm and do farm work. I shingled the farmhouse roof with a new cousin I’d met that summer. I learned to shoot a rifle.

We visited his friend who ran an oat-processing facility, and I got to see how whole oats were delivered, and the process they went through to be turned into rolled oats.

He took me, on his motorcycle, to a Chippewa powwow in Hackensack, where I was welcomed to dance. We went to tiny diners in little towns where he knew the locals, and I’d eat delicious, greasy bacon cheeseburgers. Sometimes we’d just sit around and do our own things and not talk much at all. I liked to read, and my grandpa liked to think.

Lucky for me, my grandparents really stepped in, and my grandpa was the closest thing to a dad I ever had. He was a farm boy from Minnesota who fought in the Korean War, survived, and settled in Wisconsin to work for American Motors, marry my grandma, and have seven kids.

He wasn’t highfalutin, but like I said, he liked to think. He liked to enjoy the quiet and be alone with his thoughts, and that’s something I picked up from him. He was, at his core, a planner and a philosopher. If he was a feminist, he never expressed it, but the manner in which he treated me implied the utmost faith in my versatility and competence as a human being, and I was never coddled, condescended to, or counted out.

I lost my little brother that summer to cancer. That might be the real reason I was sent to Minnesota to stay with grandpa: to keep me even further from the last weeks of the illness.

A couple of years later, I lost my grandma, too. I would have my grandpa for another decade after grandma died, until I was 25.

He’d been sick with emphysema and a broken hip during his last few years, and the doctors didn’t think he would make it out of the hospital alive that time. But he did, and I knew I’d been granted a chance to spend as much time as I could with him.

I’d been so busy before that with two small children, college, and work. But I resolved to find or make time however I could. I visited him on my lunch breaks nearly every day. I brought him his favorite catfish on Fridays. He wanted to quit smoking, something he’d done since he was 10 years old on his farm, and everyone in our family thought he was nuts. “What is the point?” “It won’t help your emphysema at this stage.” “That just seems like a lot of agony for nothing.”

But I understood. Sometimes I felt like I understood my grandpa better than anyone because of all the time we’d spent together. I understood that he knew it wouldn’t help, but he just needed to know that he wasn’t beholden to anything, that he was going out of this world his own man, addicted to nothing.

When I lost my grandpa, it was different than when I’d lost my brother and grandma.

I was so young when those deaths happened. But with my grandpa, I was old enough to know exactly what he’d meant to me and exactly what I was losing. I knew exactly how shaped I’d been by my time with him, and the grief was overwhelming and consuming.

I know now, 10 years after he died, that I was lucky to get to experience that agony and loss, because the alternative would have been having no one to lose.

I may not have had a father, but I had this man — my scrappy, minimalist, freewheeling-yet-planning-ahead grandfather who wanted me around and had confidence in me as a person.

I’m not sure I got a raw deal without a father at all. In fact, I think for me, it went the very best way it could have.

I’m a strong, accomplished woman, a wise mother, a person who thinks she can do lofty things just because she has decided to, and a thinker, a planner. I have never let anyone or anything entrap me or keep me stuck in a phase I don’t want to be in. I stand on my own two feet, and I’ve made a life for myself with these two hands.

Grandpa Loran: Without all the cues about who I am that I got from you, I don’t know that these things would be true today.

For those who are fathers to a person who doesn’t have one — whether you’re a stepdad, an uncle, a grandpa, an older brother, or a family friend — know that you simply cannot ever know how much you’re doing just by being around.

By saying: “I like having you around. You’re good company, and I much prefer having your help to doing these tasks on my own,” you're making a world of difference. It doesn’t take anything fancy, but it really does mean the world to the kid you’re sharing your time with.