A woman saw hungry people digging in her restaurant's trash, so she put a fridge outside. 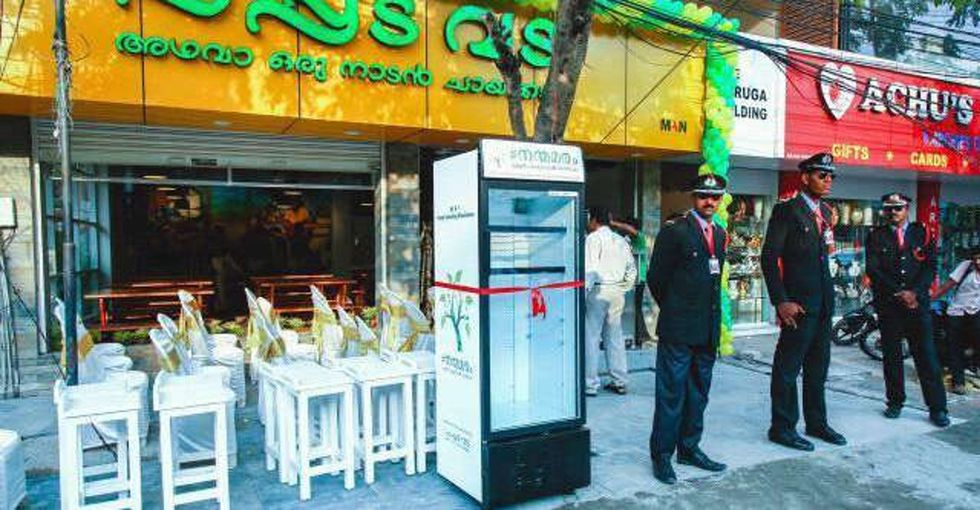 On her late night walks home from cleaning her new restaurant, Minu Pauline was struck by how often she'd see homeless and hungry people searching her garbage for a meal.

"I have seen so many people ... taking food from the trash bin, so it was a shocking thing for me," Pauline told Upworthy.

It forced Pauline — who left her bank job to open Pappadavada in her hometown of Kochi, India, in 2013 — to think about how much food she herself threw out, not only from her restaurant, but also in her daily life.

"So many people are wasting so much food and someone is taking that food from the same trash," she said.

Three years later, Pauline opened a second location of her restaurant with one major addition: She put a fully functional refrigerator out front, and stocked it with food.

Pauline, her customers, and others from the community, leave their leftovers, marked with the date, inside and homeless and hungry people can take whatever they need at any time of day.

Pauline nicknamed the fridge "nanma maram," which means "tree of goodness" or "virtue tree." The fridge is open 24 hours a day, seven days a week.

The refrigerator stays unlocked, allowing hungry people to take what they need without the shame of having to beg.

"They don't have to ask anybody," Pauline explained.

How much food do we waste? A lot.

Food waste is a global problem. Above, people pick through a dumpster in Tel Aviv, Israel. Photo by Sven Nackstrand/Getty Images.

According to the UN Environment Programme, roughly 33% of all food produced for human consumption worldwide is ultimately lost or wasted. A staggering 40% of food in India perishes before it can be consumed, while the U.S. wastes a similarly eye-popping 30%.

Pauline asks people not to purchase food specifically for the refrigerator and to only give what would otherwise go to waste.

Pauline said the fridge has been a huge hit so far and many in her local area have already started contributing their leftovers.

According to Pauline, people stock between 200 and 300 packets (or portions) of food per day in the fridge and, typically, whatever is there in the morning is gone by the evening.

Rather than give to charity, she explained that setting up the fridge was a chance for her to give back the way she knows best.

Food for sale at Pappadavada. Photo by Minu Pauline/Facebook. Used with permission.

While Pauline knows her small outdoor fridge won't solve world hunger overnight, she believes it can make a huge difference for a few in need, while combatting waste at the same time.

In the meantime, her message to her customers is simple: