Women are sharing the mental checklists they run through to navigate the world. It's a lot. 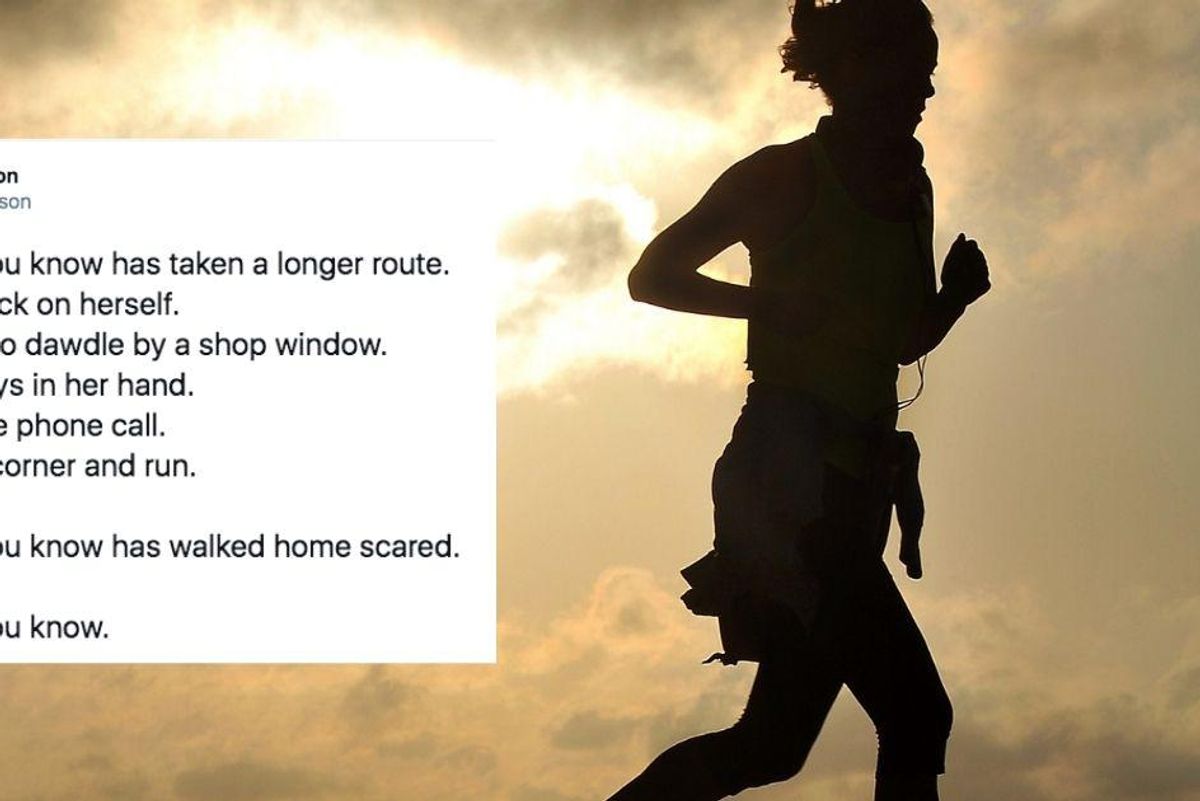 One day a few years ago I asked my husband what he thinks about when he goes running. "Depends," he said. "I might think about work or what I'm going to do that day or just sort of empty my mind, like a meditation."

"Do you ever think about getting raped on the running trail?" I asked. "Does it ever cross your mind?" It wasn't a confrontational question, but a curious one.

He looked surprised for a second, then shook his head. "No. Never," he said.

We sat in silence for a second as the obvious sunk in. When I run alone, I do think about that possibility. I think about it every time. I know every part of the trail that's obscured from public view, the parts where I run a little faster, where my spatial awareness is heightened. When a man runs behind me or towards me, my radar goes up. It happens automatically. I don't assume anyone is a rapist, of course, but I'm always mentally prepared for the possibility. After a million stories and a lifetime living in a woman's body, my instinct to prepare for the worst is as natural as breathing.

My husband experiences almost none of this. The possibility of being attacked and/or raped exists for him, but the risk and the fear is nowhere near the same as it is for me. He can enjoy a solo run, or walk down the street, or leave a building alone without being on guard constantly, whereas the times that I'm able to truly free my mind when I'm moving through the world by myself are few and far between.

The recent disappearance of a woman in the U.K. has prompted women to share the mental safety checklists they go through as they go about daily life, and seeing it all laid out in writing is eye-opening. Some of these things we consciously think about, and some of simply becomes second nature by adulthood. But I don't know any woman for whom this list doesn't resonate.

@HarrietEJohnson @SkeinHeroine Has called a friend/partner from the cab Has texted cab details to a friend to leave… https://t.co/TJtRJajXE7
— Liz Love (@Liz Love)1615405827.0

We know that not all men are going to attack us, so there's no need to #notallmen here. The thing is, we don't know who might. We don't know whether the guy walking behind us in the parking lot is a super sweet guy just heading to his car or a predator looking for an opportunity. We don't even know for sure which men we know might turn out to be a rapist. Most sexual assault is perpetrated by people known to the victim, and we all know women who have been violated by someone they thought they could trust. So not only do we deal with wondering whether a guy on the street is a stroller or a stalker, but we also have to be on alert with the guys we're hanging out with.

Hypervigilance is the norm for most women and it's exhausting, even for those of us who haven't been sexually assaulted. I'm extremely fortunate to have been surrounded by wonderful, quality men throughout most of my life, and I'm thankful for that. But I have known plenty of creeps as well, and if you were to ask me how many women I know who have been raped, the faces of my friends come flooding in fast.

- If you're walking behind a woman, crossing the street is one way to let her know you're not purposefully following her

- If you're walking toward a woman, moving over to the opposite side of the walkway and giving her a wide berth is helpful

- As silly as it might sound, a verbal acknowledgment of your awareness of the situation can be helpful. I've had men say something like, "Just want to let you know I'm walking here behind you, but I promise I'm not following you or anything creepy!" and found it comforting.

- If a woman friend asks you to escort her somewhere, don't make her feel like she's being silly. Also, don't assume she's hitting on you.

- If you see a woman who appears to be uncomfortable with a man in a public place, you can give her a potential "out" by calling to her like you know her. Something like, "Katie! Is that you?" can be enough to let her (and the potentially problematic guy) know that you've got your eye on the situation.

- If you're out in public and a woman comes up and acts like you're a friend of hers, play along. Sometimes women will do this to get away from a creepy guy.

- Speak up when other men make sexist or inappropriate comments about women. Don't go along with the culture that allows women to be seen primarily as sexualized objects.

Let's work on making a world where women don't have to constantly be on high alert, where we are all free to go out for a walk or a run having our thoughts regularly disrupted by concerns for our safety.

From Your Site Articles
Related Articles Around the Web
women