Bert and Ernie are gay just like I've been telling you forever. 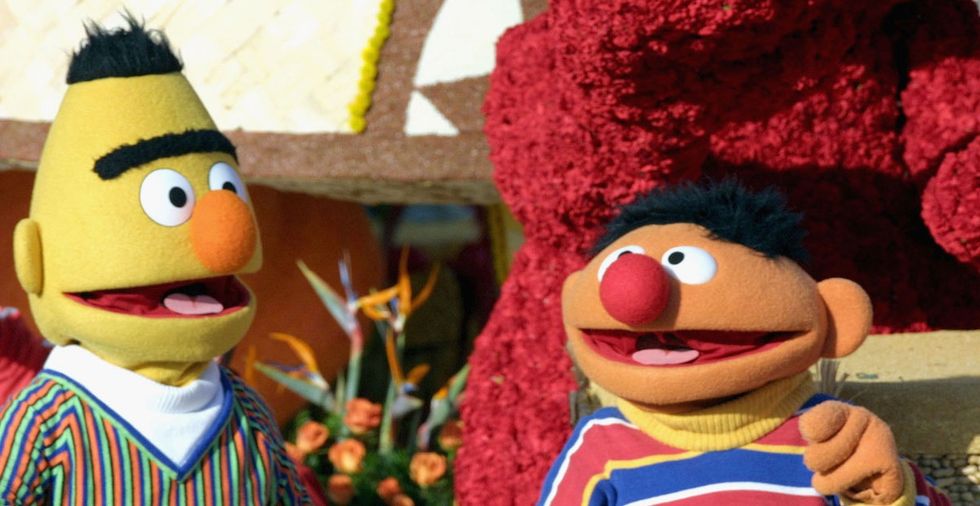 Let me tell you how I feel whenever I see my favorite people's names trending on Twitter: Conflicted.

You know the feel? You log on to see which blue verified checkmarks are mad at each other today and you see that someone you've loved since your childhood (or are very into right now) is blowing up social media.

And then some days you log onto Twitter and both Bert and Ernie from Sesame Street are trending separately and you think "I hope they've finally come out of the closet and are living the best little lives they can considering they are puppets who live in a basement."

Well, good news: According to a Sesame Street writer, Bert and Ernie are (officially) gay!

That's not just something I made up as an excuse to call all my friends to say "I told you so" this morning.

Mark Saltzman, one of Sesame Street's former writers, told Queerty that the relationship between the bright yellow puppet who just wants to chill and the bright orange puppet who loves playing the trumpet in the middle of the night* has always been more than platonic.

Saltzman told the outlet that he wrote the characters around his relationship with his late partner, famed editor Arnold Glassman.

"I remember one time that a column from The San Francisco Chronicle, a preschooler in the city turned to mom and asked “are Bert & Ernie lovers?” And that, coming from a preschooler was fun," Saltzman said.

"And that got passed around, and everyone had their chuckle and went back to it. And I always felt that without a huge agenda, when I was writing Bert & Ernie, they were. I didn’t have any other way to contextualize them. The other thing was, more than one person referred to Arnie & I as “Bert & Ernie.”

Saltzman, who says he identified more with Ernie (even though he looks more like a Bert), added " I don’t think I’d know how else to write them, but as a loving couple."

Sesame Workshop's not on the same page, but what's the harm of letting Bert and Ernie be gay?

On Tuesday, the non-profit behind the show released a statement saying that Bert and Ernie have always been best friends.

While some praised the org for "clearing it up," others had important questions. Like why a gay relationship isn't appropriate for children to learn about. Or why we immediately have to reduce any romantic partnership to sex or "an agenda." After all, plenty of muppets have heterosexual significant others and no one bats an eye. (Why Bert and Ernie can't afford a two-bedroom is also a very good question.)

In a world where representation matters (a lot), it's important to remember that Bert and Ernie can teach kids more than one thing.

@SesameWorkshop They may have been created to teach kids that people can be friends with those who are different fr… https://t.co/Uk2de4x3S7
— Ward Q. Normal (@Ward Q. Normal)1537297915.0

Bert and Ernie aren't a couple. They're exes who still live together and whose excessive emotional involvement with… https://t.co/GsovlVZFv8
— Josh Barro (@Josh Barro)1537297444.0

*That's how you know it wasn't just a "roommates" situation, by the way. I don't know about you, but no roommate I've ever had would hesitate to evict me if I played some kind of wind instrument at 3am. My husband on the other hand? He's got to put up with me.