This mom's tweet thread about playground racism went viral because parents need to hear it. 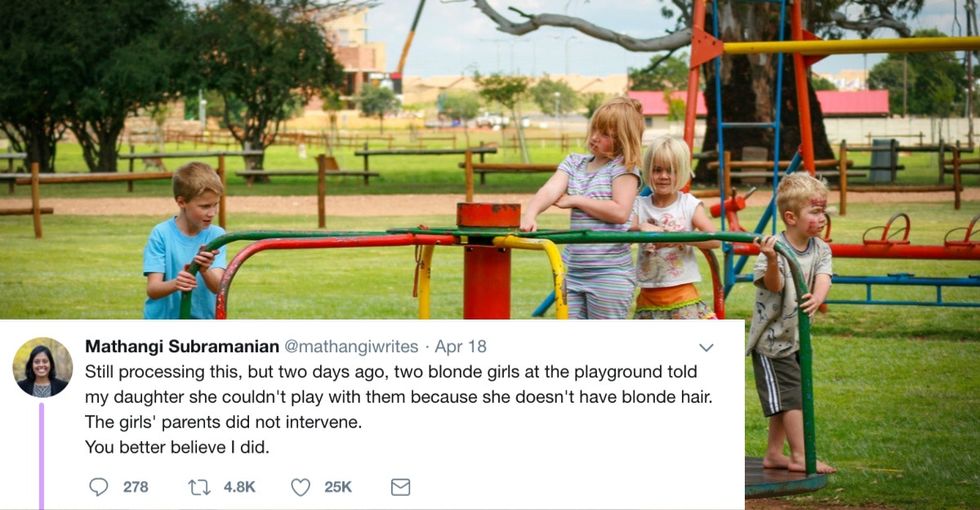 Writer slash mom Mathangi Subramanian recently witnessed some playground discrimination. Even more disturbing than the words that were thrown around by the children is the fact that their parents turned a blind eye to it.

“Still processing this, but two days ago, two blonde girls at the playground told my daughter she couldn't play with them because she doesn't have blonde hair,” Subramanian explained in a multi-tweet post. “The girls' parents did not intervene. You better believe I did.”

Her message to the children was blunt and to the point, yet totally reasonable. She didn’t attempt to “school them,” but carefully explained that excluding others is never cool. “I told the blonde kids at the playground that they can't exclude people,” she continued. “I did it calmly and politely, while their parents watched.” Um, yeah. They just watched. And said nothing.

After the incident, Subramanian had a heart-to-heart with her daughter about race and discrimination, revealing on Twitter that this was sadly not the first time her little girl had experienced exclusion because of her skin color. She points out that it isn’t really fair that she is forced to have these sorts of conversations all of the time while white parents have the privilege of avoiding it.

“Parents of color talk about race with our kids all the time. We have no choice. It’s there, everywhere, and can’t avoid it.”

The bottom line is that as a parent, your job is to, well, parent. By promptly addressing the situation, the blonde moms could have taught their children an important lesson. “They should've said something. ‘My daughter was watching. Their daughters were watching,’” she tweeted. “White parents: TALK TO YOUR KIDS ABOUT RACE. I know it's uncomfortable. But the rest of us do it all the time. We need you to do it too.”

Kids are not colorblind, but it is our responsibility to raise them with the understanding that skin tone doesn’t really matter.

As a mother, I have occasionally found myself in the position where I knew I needed to address race with my children. Despite the fact that we live in Philadelphia, one of the most racially diverse cities in the country, and that my kids have friends of every skin shade imaginable, they still say things that make me cringe a bit. They notice that other people don’t look the same as them — whether that has to do with skin color or missing body parts or if they have a penis or vagina. They are just figuring things out, and since kids rarely have a filter, that means they say what they’re thinking. Out loud.

When they’ve unknowingly said things that could come across as ignorant, I have immediately corrected them. Because that is my job. “You treat people equally, no matter what,” I have explained. “Never exclude others.”

The bottom line is: whether we are talking about race, nutrition, manners or hygiene, we can’t expect kids to just “know better.” It is our job to teach them right from wrong. It is our job to explain why differences aren’t a reason to treat people differently. If we, as parents, don’t guide them through social and racial awareness, how can we ever expect racism to dissolve for good?