Questlove gets pulled over 6 times a year. Sadly, his experience is not unique. 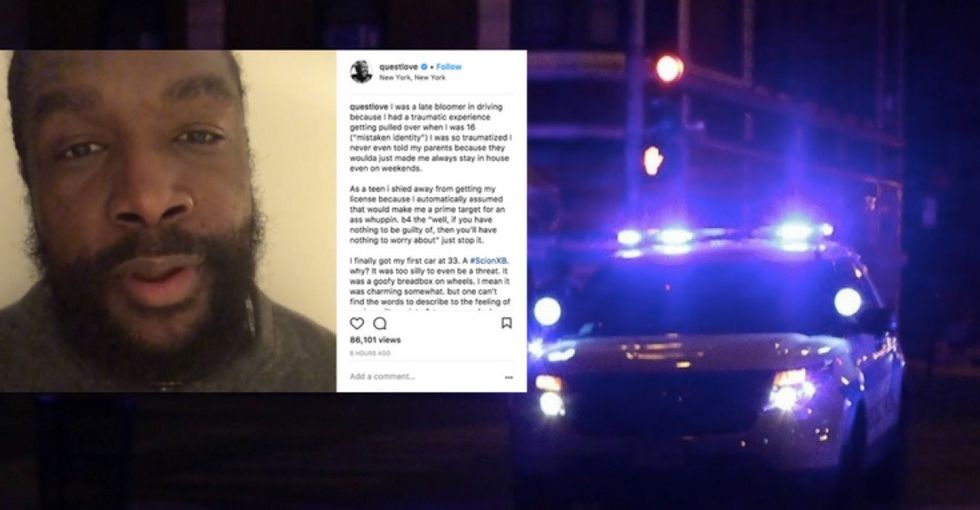 Questlove, the multi-talented, affable percussionist for The Roots, took to Instagram to share his experiences as a black man behind the wheel.

In the early morning of Nov. 17, possibly after getting pulled over, Questlove posted a video with a lengthy caption detailing some of the experiences he's had "driving while black."

"Getting pulled over is like one of the most degrading things that can happen to you, when you look like me. You see the fingers are on the trigger, and these lights are blinding you, these flashlights. There's a lot of coded questions, 'cause they're basically trying to figure out how can you afford the vehicle that you have."

Questlove's success and celebrity do not insulate him from inappropriate, alarming, or potentially dangerous interactions with the police.

After a traumatic experience getting pulled over at 16 for a case of "mistaken identity," Questlove lost his interest in driving and didn't get a car of his own until he was 33. His first wheels? A Scion XB, an affordable, lunchbox shaped car that almost looks like a pint-sized delivery truck. (After the model was retired in 2015, Jalopnik penned a loving obituary to the "goofy little box" they "loved.") Officers would joke to him, "It looks like you stole a college student's car" — an offensive statement on multiple levels.

But really: Why the XB? It was the least-threatening car on the road, and Questlove was a successful, internationally renowned musician at the time. This wasn't about looks or speed. It was about coming home alive.

"[O]ne can’t find the words to describe to the feeling of panic, guilt, anxiety & trauma one feels when they won’t know the outcome of this getting pulled over scenario. This is not an exaggeration folks."

Questlove's fears are not misplaced. Statistically, a black driver is around 30% more likely to be pulled over than a white driver. And while the number of deaths caused by law enforcement officers declined a bit in 2016, young black men aged 15 to 34 were nine times more likely to be killed by police than other American demographic groups.

Pallbearers carrying the casket of Philando Castile after his funeral. Photo by Stephen Maturen/Getty Images.

And it's not limited to once or twice every few years. For Questlove, these moments happen every few months.

As many as six times a year. The panic. The fear. The degrading feeling of powerlessness. Six. Times. A. Year.

While Questlove is sometimes recognized and let go without incident, what of the people of color pulled over, harassed, roughed up, or arrested because they aren't celebrities? Where is the justice for them?

"This has been going on for 8 years now. 6 times a year. Without fail. Results are always the same: search for the (literal? preverbal?) smoking gun because I’m NOT supposed to be in a car THIS nice.If they know it’s me they lemme go w/o fail. But what about those without the benefit of a doubt? they ain’t getting off so easy. something has GOT to give folks."

Questlove is not the only black celebrity speaking up about their experiences and calling for equal justice.

Police officers raised their weapons at, handcuffed, and forcibly detained NFL star Michael Bennett after gun shots were heard on the Las Vegas strip. He shared his story in an open letter on Twitter.

"I felt helpless as I lay there on the ground handcuffed facing the real-life threat of being killed. All I could think of was 'I'm going to die for no other reason than I am black and my skin color is somehow a threat.'"

In 2015, comedian Chris Rock had a series of tweets with selfies detailing his three traffic stops in seven weeks, each one with the outcome, "Wish me luck." Rock's tongue-in-cheek caption has a grain of truth — yes, he came out the other side, but not everyone is that lucky.

If you want to be an ally in the struggle for equality, there's an easy way to start.

People of color are not asking for special privileges or treatment. We're simply asking to be treated fairly with decency and respect. For too long, these demands haven't been taken seriously, or somehow mischaracterized as "unpatriotic." But is it too much to simply be seen as human beings?

To be a strong ally, the best thing you can do is listen. Our stories are real. So is our pain and fear. As Questlove put it: "Listen & Believe us when we tell you what’s goin on out here. next time y’all feel like reminding me life Is different cause im on tv."

Watch Questlove's video and read his heartfelt post in full.

I was a late bloomer in driving because I had a traumatic experience getting pulled over when I was 16 (“mistaken identity”) I was so traumatized I never even told my parents because they woulda just made me always stay in house even on weekends. As a teen i shied away from getting my license because I automatically assumed that would make me a prime target for an ass whuppin. b4 the “well, if you have nothing to be guilty of, then you’ll have nothing to worry about” just stop it. I finally got my first car at 33. A #ScionXB. why? It was too silly to even be a threat. It was a goofy breadbox on wheels. I mean it was charming somewhat. but one can’t find the words to describe to the feeling of panic, guilt, anxiety & trauma one feels when they won’t know the outcome of this getting pulled over scenario. This is not an exaggeration folks. I’ve been let go plenty of times, but why should one have to work w jay z, or do that funny bit w chappelle to be given the benefit of the doubt? (back when I was in the music making business my car was the judge/jury: make a gang of beats or maybe just having mastered the new Roots album and I drive/listen to it for 3-4 hours near Temple/Drexel/UPenn which i learned was bad news.) examine that one: A life where one has to compress & re adjust to make others feel safe. I mean yes, be considerate and aware of other people’s surroundings. But man...me writing this rant is like Tre punching the air in #BoyzInTheHood. That’s how mad I am. This has been going on for 8 years now. 6 times a year. Without fail. Results are always the same: search for the (literal? preverbal?) smoking gun because I’m NOT supposed to be in a car THIS nice. If they know it’s me they lemme go w/o fail. But what about those without the benefit of a doubt? they ain’t getting off so easy. something has GOT to give folks. I was shaking earlier & typing this out is calming me down. Listen & Believe us when we tell you what’s goin on out here. next time y’all feel like reminding me life Is different cause im on tv. I’m tagging you. Next time you lecture me cause I’m explaining why peaceful protest in needed, I’m tagging you. goodnight. peace.