Libraries full of human 'books' are spreading across the country.

'Show me a person who doesn't want to feel understood.' 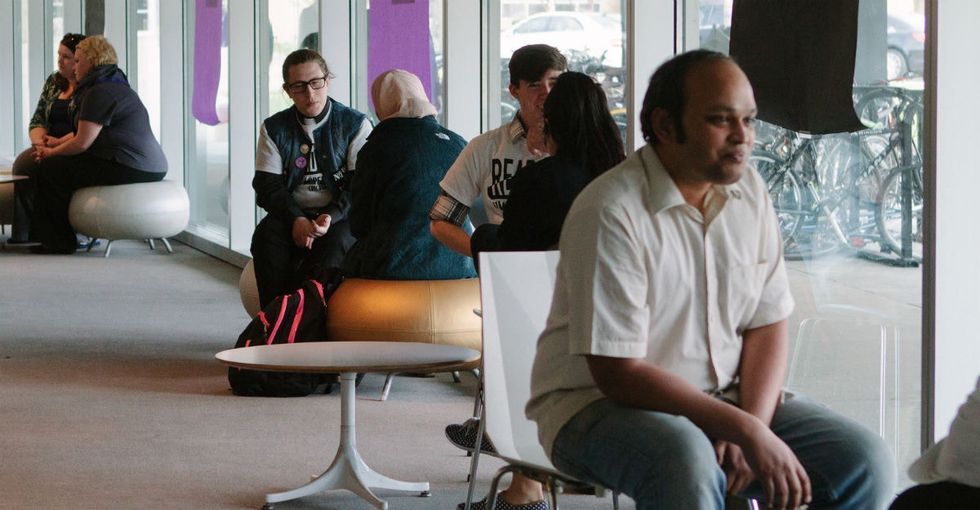 What would happen if you sat down and had an open and honest conversation with someone with completely opposing views?

Could it bring you closer together?

All images via the Human Library Organization, used with permission.

The Human Library Organization is counting on it.

In this day and age, it may seem like getting two people with different views together to discuss them is a recipe for disaster. Just read the comment section on any online post on a heated topic and you're bound to wish you hadn't. Political division and the ability to hide behind a screen and shout your thoughts through your fingertips has encouraged an "I'm right, you're wrong" discourse that seldom opens doors for productive dialogue.

Human Libraries — where actual people are on loan to readers instead of books — are a way to highlight the common ground.

At a Human Library, people volunteer to become "books" and make their experiences open and available. "Readers" are encouraged to ask them questions freely, and they'll get honest answers in return. There's no judgment, and no questions are off-limits.

You won't find people talking over each other. You won't find nasty comments or political agendas, and you won't lose faith in humanity. At the Human Library, you might actually feel better about the world you live in. You might even make a new friend!

The human "books" consist of people who have been marginalized or discriminated by society.

Abergel has set out to counter that by building a space for conversations that can challenge stereotypes and prejudices through dialogue.

Some of the "books" readers may find at a Human Library include a Muslim, a Jew, a cancer survivor, a recovering alcoholic, a police officer, a refugee, someone living with Alzheimer's, a veteran, a teacher, and the list goes on.

Even better? Human libraries are on the rise globally, including in the United States.

The Human Library Organization, originally from Copenhagen, Denmark, just marked its 16th year in service. This year they're as busy as they've ever been.

Allison McFadden-Keesling can vouch for the org's success. When she saw an article about the Human Library in a London newspaper in 2008, she immediately knew she wanted to set up an event for students at Oakland Community College in Michigan. Fast-forward to today, and she's getting ready to host her 11th Human Library event on campus in five years.

"The most pleasantly surprising thing about the Human Library is how close all the human books become to one another," she said. "It has a family reunion feel every time we host as previous human book participants return and others join."

Some of the human books found in Chicago!

From Michigan to Connecticut to Texas to Arkansas, Human Library events are growing — with 30 new U.S. partners having joined in the past month alone.

Abergel knows the rise in interest isn't a coincidence. There's a consistent theme he sees in the applications he receives daily: the negative and fearful tone of the election.

"The tone of the election has made it important for many to set up a Human Library to counter and to show that this is not who we are," he said.

In a world that seems to focus on controversy instead of compassion, it can be difficult to identify our shared humanity.

Human Libraries help to remind us there really is more that unites us than divides us. And as events now spread throughout 82 countries, with Human Libraries even set to launch soon in Pakistan and Jordan, you can tell that is a shared feeling.

"We can spend billions and billions on trying to build up homeland security and our safety, but real safety comes from having positive relations to other groups in your community," said Abergel.