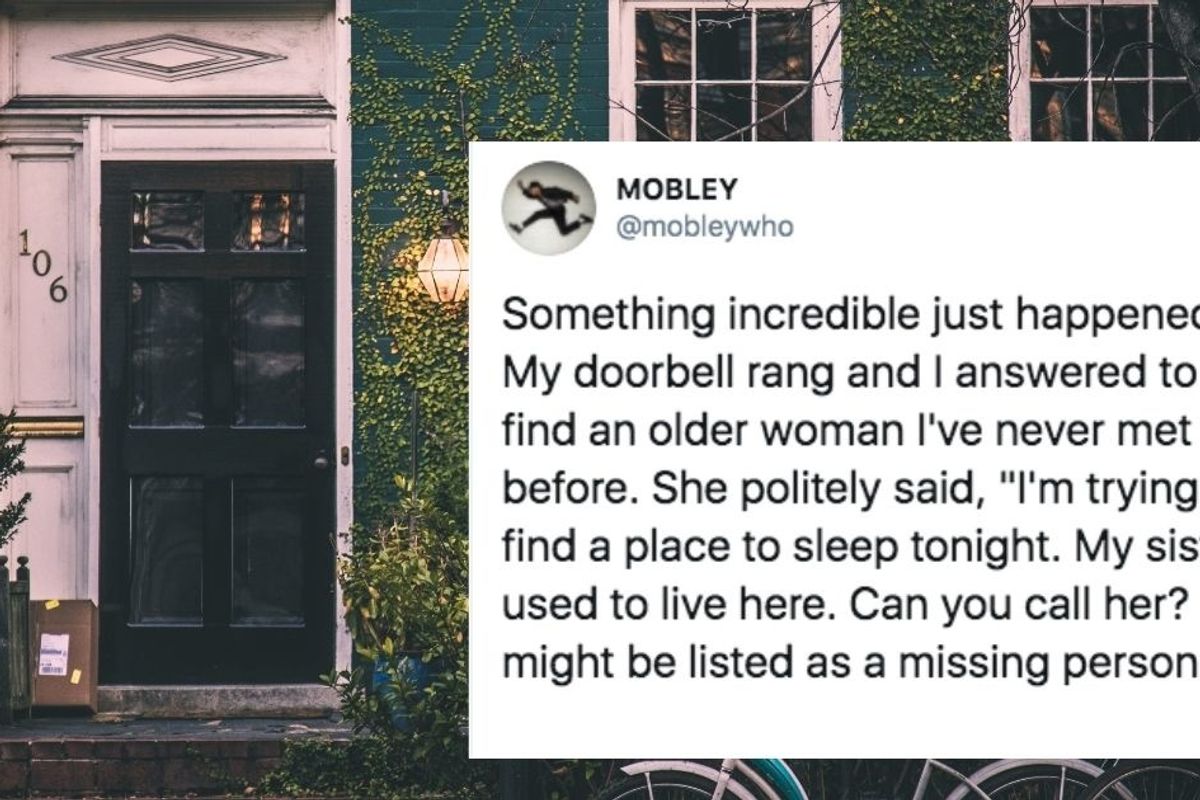 We all know a little kindness can go a long way. But sometimes, a little kindness can also peel back the lid on issues that are inadequately handled in our society. A generous donation to help a teacher buy classroom supplies is great, but it also points to how poorly funded our schools are. A famous athlete building a medical center for uninsured or underinsured Americans draws praise, but also shows the sad state of healthcare in our country.

Musician Mobley shared a story on Twitter about a random woman who showed up at his door needing help figuring out where she was. And after taking just a few minutes to help her, he explained how the woman fell through the gaping holes in our social safety net multiple times.

"Something incredible just happened. My doorbell rang and I answered to find an older woman I've never met before. She politely said, 'I'm trying to find a place to sleep tonight. My sister used to live here. Can you call her? I might be listed as a missing person.'

This was a little disorienting, so it took a little more conversation to get on the same page. She told me her name and her sister's name. I live with someone at high risk so I couldn't invite her in, but we brought her some water, food, and a fan while I started searching.

It took about 3 minutes to find her sister's phone number. I called - went straight to voicemail. So I texted, explained the situation and she called me right back. She excitedly confirmed that it was her sister and said she was getting in her car now (from an hour away).

It turns out her sister had been on a mandatory, temporary stay in a psychiatric hospital. 3 weeks ago, she learned that her sister was somehow no longer in the hospital's custody and was out on the street with no money/phone. She filed a missing persons report.

The only thing she asked the cops for was 'directions to her sister's house'. She gave them her name and address and asked how to get there. They refused to help her.

After that she spent weeks walking across the city, looking for houses of people she knew decades ago.

She told me some of the places she had walked and one is a 45-minute drive from my house. I can't imagine how many miles she must have covered. She'd been sleeping on the streets for weeks for want of access to information/connection that took it me 3 minutes to find/make.

I hung out with her while we waited for her sister and she told me about how much the neighborhood had changed and we talked about how big the trees had gotten. Eventually, her sister arrived and they exchanged a very excited/relieved hug before thanking me and leaving.

Anyway, the reason I share this story is because it illustrates the violent hostility of the world we've created for unhoused people and disabled people in this country. Where the small task of looking up a number and making a phone call becomes a weeks-long epic journey...

I deserve zero credit for the small effort it took to help this person. The 'market value' of my house is predicated on a system that makes housing a 'scarce quantity' that only people with enough money get to have (even as millions of houses sit empty).

This already tragic story could've ended much worse. We must ask ourselves if we're okay with a society that's set up to needlessly hurt/kill so many.

If we're not, let's treat it like the emergency it is and change it. If we are, then the path ahead seems grim."

After Mobley's Twitter thread went viral, he said he won't be giving interviews and won't divulge any information about the people involved in the experience (which is wise as far as privacy goes).

(A number of people have reached out with interview requests about this story. Respectfully, I will not be doing a… https://t.co/FtrPt7rITS
— MOBLEY (@MOBLEY)1599102696.0

Though the musician said the only thing he wants to promote is "the end of capitalism," we don't necessarily have to go that far. Plenty of western democracies have managed to balance free market systems with government-provided social services. For example, the Nordic model of the Scandinavian countries, which many refer to as "socialism" is more of a "compassionate capitalist" system, according to the Foundation for Economic Education.

We can point to the various points where the system seems to have failed this woman while also acknowledging that we don't know the whole story. However, there's no question that unhoused people and those with mental health issues are often overlooked or dismissed, even by people who seem like they should be in a position to help them.

It's a reminder that if everyone's life truly does matter, we need social systems and safety nets in place that prove it.

From Your Site Articles
Related Articles Around the Web
kindness