Opioid users are flocking to libraries in droves. Here's what happens when they overdose. 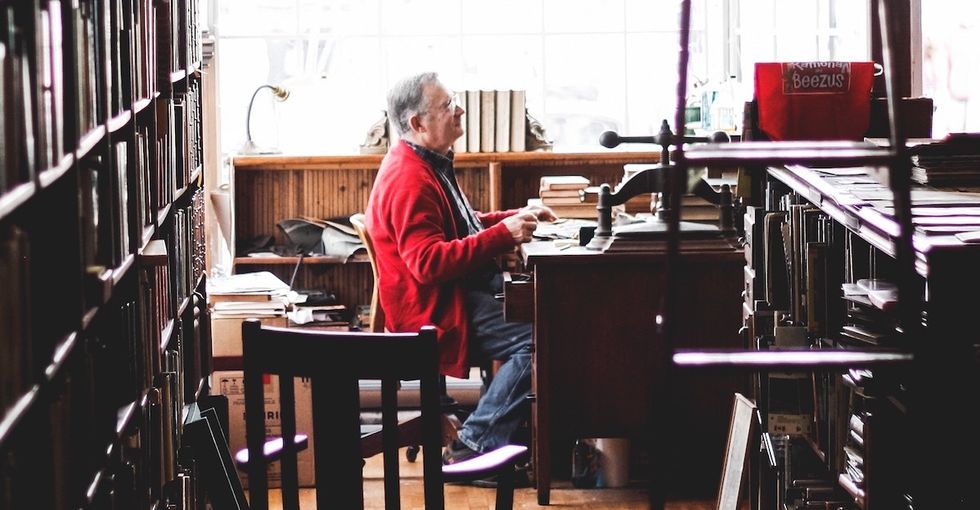 Last month, someone had a medical emergency at the Philadelphia Public Library, and distressed onlookers struggled with how to help.

Thankfully, someone who knew what to do rushed to the scene — another overdose, another librarian at the ready.

Ben, a librarian at a Midwestern public library, sees such overdoses on a weekly basis. "There are times it's happening multiple times a day," he says. "Not too long ago, we had two in the same restroom at the same time. We call security; security calls paramedics. Of course they always find somebody lying there."

Many of the people being asked to respond in the moment — to think clearly and decisively in a life-or-death situation, and sometimes even to administer life-saving treatment — are librarians.

But do we have a right to expect that of them? Do we have any choice?

Curious as to why libraries have been so hard-hit, I reached out to librarians in several different cities, starting with Vermont librarian Jessamyn West.

"There are a lot of places that are de facto public meeting spaces because of how they're used. People hang out at the baseball field, or the Cumberland Farms, the bar, the church," West tells me.

But most of these places require people to be a client or established member of the community in order to belong. "The library doesn't," she says. "It really strives to be available to everyone."

Libraries are quiet, private spaces you can stay for extended periods of time and not be questioned. While you might need an access code to use a Starbucks bathroom, that's not a barrier you'll encounter at a library.

Ben has another theory as to why addicts head to the library: "If something happens, someone will alert the authorities."

"They know someone will have Narcan and help them out," he adds. Narcan (also known as Naloxone) is an opioid antidote.

I asked Dr. Chad Brummett, assistant professor of Anesthesiology at the University of Michigan School of Medicine, what happens without access to Narcan or knowledge of CPR. How much time does one have?

"With oral pills, the onset might be much slower. Unfortunately, a lot of overdoses we’re seeing right now are from heroin, fentanyl, or carfentanil, and that can be incredibly fast, like minutes, a minute," Brummett says. "If somebody has just shot up fentanyl, your timeline might be incredibly short."

Within the library community, boundaries are always being discussed and redrawn around which services libraries can and should provide.

Debate and dissent are common. While the American Association of Libraries states it is "crucial that libraries recognize their role in enabling poor people to participate fully in a democratic society," that doesn't mean every librarian will feel equally comfortable in that role.

"Being a librarian now implies being an expert in way too many fields: social work, child development, health care," wrote one member of a Facebook group for librarians.

A public librarian in Maine who spoke under the condition of anonymity shared that they "have found needles throughout the building (namely in the bathrooms, but not always)."

Another librarian at an urban branch told me, "This happens with great regularity here. I doubt, however, that you will get anyone in authority to talk honestly about it."

Annoyed Librarian, an anonymous Library Journal contributor, spoke for many when they expressed concerns about stepping into a first responder role: "Is the goal just to make sure that people don't die of overdoses in the library? Or is it to help them before they overdose?" they asked. "Or is that the social worker's job? It's hard to tell anymore."

Between January and March 2017, the Denver Public Library's Central Branch experienced six overdoses, including one death.

In a move that's made national headlines, its administration decided to stock Narcan and offer voluntary training to staff members who want to learn how to administer it. Chris Henning, a spokesperson for the Denver Public Library, says that while the administration expected some public resistance, they've received only positive feedback.

One of the reasons Denver has had such success rolling out their program is that they're among a growing number of libraries employing on-site social workers. Aside from their other duties, social workers at their branches offer daily drop-in hours. Their primary clients are homeless people seeking help with shelter, medical issues, and veterans benefits.

But social workers are a strategic investment, one not all library systems can afford or are willing to make.

If Denver and Philadelphia are arming staff with Narcan and training, should other cities follow their lead?

Based on what librarians shared with me, the most likely reasons are a mixture of bureaucratic inertia, ignorance of the true scope of the problem, and fear of negative publicity. "The administration seems [to have] turned a blind eye to it," says Ben, of his city's library system. "They don't have to deal with it. We deal with it on a very personal level because we see it every day and they don't."

It's worth noting that those heroic Philadelphia librarians didn't wait for Narcan training, instead reaching out to a local a needle-exchange program to show them how to administer it.

But even Narcan isn't a perfect fix: The antidote is effective at blocking the opioids only for a short time — typically less than an hour — so it's still critical to get someone who has overdosed to a hospital so they can be properly treated.

Ultimately, even with training and better resources, libraries are not well equipped to address the root cause of the epidemic.

And as long as they remain on the front lines, witnessing overdoses on the job, feelings of sadness and helplessness will weigh on some librarians.

"None of us [are] trained social workers," says Ben. "To maintain a certain level of empathy when you're seeing this day in and day out [is] taxing and difficult."

Is it fair to ask librarians to step into the chasm between where the social safety net ends and their real job — that is, the one they went to school for — begins?

After speaking with so many librarians, I still don't know the answer. What I do know is that many librarians are willing to do their best to help in these frightening and sometimes tragic scenarios, and for that they deserve not just our support, but that of their administrators, too.

"[Opioid addiction is] a tragedy," says West. "Everybody has to take partial responsibility for the fact that we have an overdose problem. The big thing is that librarians really care, and caring is hard when people are in pain."

This article originally appeared on Catapult and is reprinted here with permission.