She helped put a man on the moon. Now Katherine Johnson is getting her own movie. 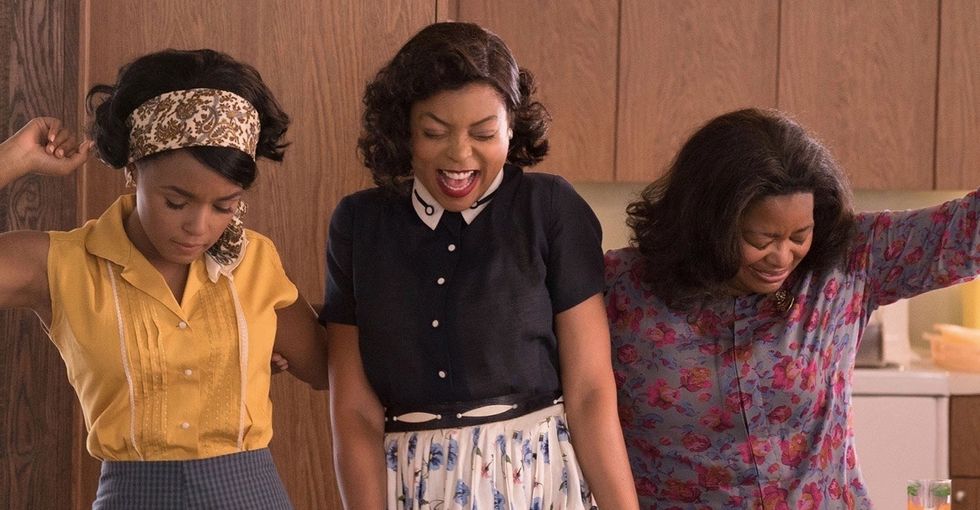 Mathematician and NASA scientist Katherine Johnson isn't exactly a household name, but that may soon change.

Johnson, best known for her role calculating the trajectories for NASA's Mercury and Apollo missions by hand — including the moon landing — is one of the greatest American minds of all time.

And to think you may not have ever even heard about her.

Now 97, Johnson is finally getting some much-deserved credit for her work, including an upcoming movie based on her life.

And more than 10,000 people have signed on in support of making a "Women of NASA" Lego set featuring Johnson, Sally Ride, Mae Jemison, Margaret Hamilton, and Nancy Roman.

But the biggest boost to Johnson's name recognition is likely to come from "Hidden Figures," a movie starring Taraji P. Henson, Octavia Spencer, and Janelle Monáe as Johnson, Dorothy Vaughn, and Mary Jackson, respectively. The film is based on the book of the same name, written by Margot Lee Shetterly.

Representation matters. History books can only tell part of the story, and they often leave out important characters.

Though jobs in science, technology, engineering, and math (STEM) are some of the fastest-growing career paths in the U.S., women make up just 14% of engineers nationwide.

While a single movie highlighting the lives of women of color working in a STEM field isn't likely to eliminate the representation gap, girls around the country will at least be made aware that yes, they can be mathematicians or engineers or scientists if they want to. At the very least, "Hidden Figures" might finally make Katherine Johnson the household name she always should have been.

For Festus Oyinwola, a 19-year-old first-generation college student from Dallas, Texas, the financial burden of attending college made his higher education dreams feel like a faraway goal.

As his high school graduation neared, Oyinwola feared he would have to interrupt his educational pursuits for at least a year to save up to attend college.

That changed when Oyinwola learned of the Dallas County Promise, a new program launched by The Commit Partnership, a community navigator that works to ensure that all North Texas students receive an equitable education.

Photo by Element5 Digital on Unsplash

The Dallas County Promise covers any cost of tuition not included in financial aid grants. To date, nearly 60 high schools in Dallas County currently participate in this initiative.

It pairs students — including Oyinwola — with a success coach for the following three years of their education.

To ensure that students like Oyinwola have the opportunity to build a solid foundation, The Commit Partnership is supported by businesses like Capital One who are committed to driving meaningful change in Dallas County through improved access to education.

The bank's support comes as part of its initial $200 million, multi-year commitment to advance socioeconomic mobility through the Capital One Impact Initiative.

No matter how great a parent you are and how well you teach your children how to behave, kids are occasionally going to be less-than-pleasurable to be around. They are human, after all. And they are engaged in an intense, years-long process of learning about being human, growing and change rapidly through various phases and stages.

As parents, it can be hard to figure out how to help them through all of that. Especially when they're pushing our own emotional buttons.

Mom and educator Dr. Chawanna B. Chambers— or "Dr. Chae," as she goes by on her website—shared a parenting tale from her own life that offers us all a beautiful example of how to teach a child who is seemingly acting disrespectful how to manage their responses. For many parents, a child talking back or being rude is met with immediate anger or sternness—perhaps an instinctual response from their own upbringing or beliefs about respecting our elders.

But for Chambers, her 6-year-old speaking rudely was an opportunity to teach a lesson about our brains and how we can head off a problematic interaction before it starts.

"I noticed that my 6-yo was being a lil rude/curt w/me, so I asked her what was up," Chambers wrote. "At first, she just looked at me, so I reiterated that I can't help her if I don't know what's wrong.

Social entrepreneurs have new partner in growing their causes

The past year has changed the way a lot of people see the world and brought the importance of global change to the forefront. However, even social impact entrepreneurs have had to adapt to the changing circumstances brought on by the Coronavirus pandemic.

"The first barrier is lack of funding. COVID-19 has deeply impacted many of our supporters, and we presume it will continue to do so. Current market volatility has caused many of our supporters to scale back or withdraw their support altogether," said Brisa de Angulo, co-founder of A Breeze of Hope Foundation, a non-profit that prevents childhood sexual violence in Bolivia and winner of the 2020 Elevate Prize.

To help social entrepreneurs scale their impact for the second year in a row, The Elevate Prize is awarding $5 million to 10 innovators, activists, and problem–solvers who are making a difference in their communities every day.

"We want to see extraordinary people leading high-impact projects that are elevating opportunities for all people, elevating issues and their solutions, or elevating understanding of and between people," The Elevate Prize website states.

Founded in 2019 by entrepreneur and philanthropist Joseph Deitch, The Elevate Prize is dedicated to giving unsung social entrepreneurs the necessary resources to scale their impact and to ultimately help inspire and awaken the hero in all of us.

"The Elevate Prize remains committed to finding a radically diverse group of innovative problem solvers and investing unconventional and personalized resources that bring greater visibility to them as leaders and the vital work they do. We make good famous," said Carolina García Jayaram, executive director, Elevate Prize Foundation.

The application process will take place in two phases. Applicants have till May 5 for Phase 1, which will include a short written application. A select number of those applicants will then be chosen for Phase 2, which includes a more robust set of questions later this summer. Ten winners will be announced in October 2021.

In addition to money, winners will also receive support from The Elevate Prize to help amplify their mission, achieve their goals, and receive mentorship and industry connections.

The 10 winners include Simprints, a UK-based nonprofit implementing biometric solutions to give people in the developing world hope and access to a better healthcare system; ReThink, a patented, innovative app that detects offensive messages and gives users a chance to reconsider posting them; and Guitars Over Guns, an organization bridging the opportunity gap for youth from vulnerable communities through transformational access to music, connectivity, and self-empowerment.

You can learn more about last year's winners, here.

If you know of someone or you yourself are ready to scale your impact, apply here today.

From Your Site Articles
Related Articles Around the Web
social impact
Get stories worth sharing delivered to your inbox
By signing up you agree to Upworthy's privacy policy.
Trending Stories
Culture

A simple way to make egg hunts less stressful for everyone, courtesy of the Netherlands

Bartender shares her $9.28 paycheck to remind everyone why tipping is so important