Do you have what it takes to race around the world? Yes. Yes, you do. 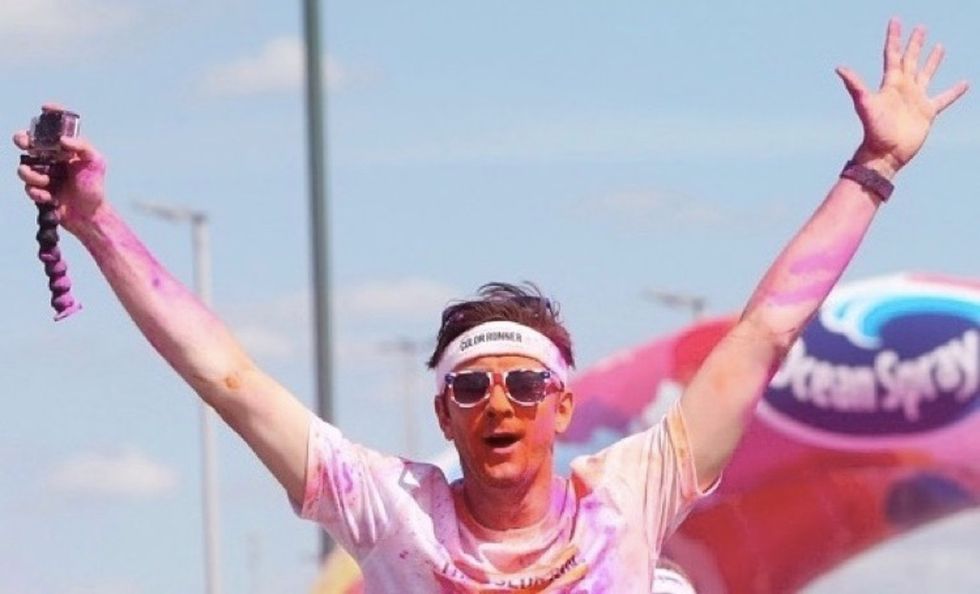 Runners are always looking for their next big challenge.

A man celebrates during The Color Run, a popular race series where participants are showered with colored powder. Photo by Claire Greenway/Getty Images for The Color Run.

This is not your average run. No race bibs. No timing chips. No bananas at the finish. In fact, there's not even a starting line. Say what?!

Nope. Nothing like this. Shut it down. Photo by Steve Powell/Getty Images.

It's called Earthathon, and it's a worldwide digital relay race.

Runners from all over the world register for free, join one of 10 teams, and run wherever and whenever they please. Each participant logs their miles on Twitter using their team name and the hashtag #earthathon. Then the teams, each around 150 runners strong, can see their rankings and duke it out on the Earthathon website.

More than a race, Earthathon is basically a sweaty support group for life.

As runners tweet their mileage, their international teammates offer plenty of virtual support and motivation.

Since running is so often a solitary sport, Earthathon provides the chance for athletes of all abilities to come together and work toward an ambitious goal.

Dave Spencer, Earthathon founder, told Runner's World Newswire, "It goes way beyond running. The people doing it have created a group of friends from around the world."

And some of the runners are putting in miles to bring extra attention to important issues, too.

To them, the race is much bigger than a simple workout. One team, known as #HeForSheRunners, is "a derivative of the #HeForShe solidarity movement for #GenderEquality."

Others run for loved ones or combine the program with existing fundraisers for medical research or charities.

The race is long, and getting to the finish is all about teamwork.

The 25,000-mile journey usually takes teams five to six months to complete, and when one team finishes, its members join other groups to help them across the finish line, too. It's basically a 21st-century version of this:

This Italian marathoner was helped across the finish line in the 1908 Olympics and was disqualified. There are no penalties for helping out in Earthathon. Photo by Hulton Archive/Getty Images.

The third Earthathon is going on now, and you can still sign up.

Your dreams are waiting. Dust off those running shoes and get going. Photo by Stewart Chambers/Flickr (altered).

This is a unique opportunity to join a community of fellow athletes, runners, joggers, and walkers from around the world ... and to raise awareness for causes that matter to you! If you're ready for the race of a lifetime, register online, lace up your shoes, and hit the road.