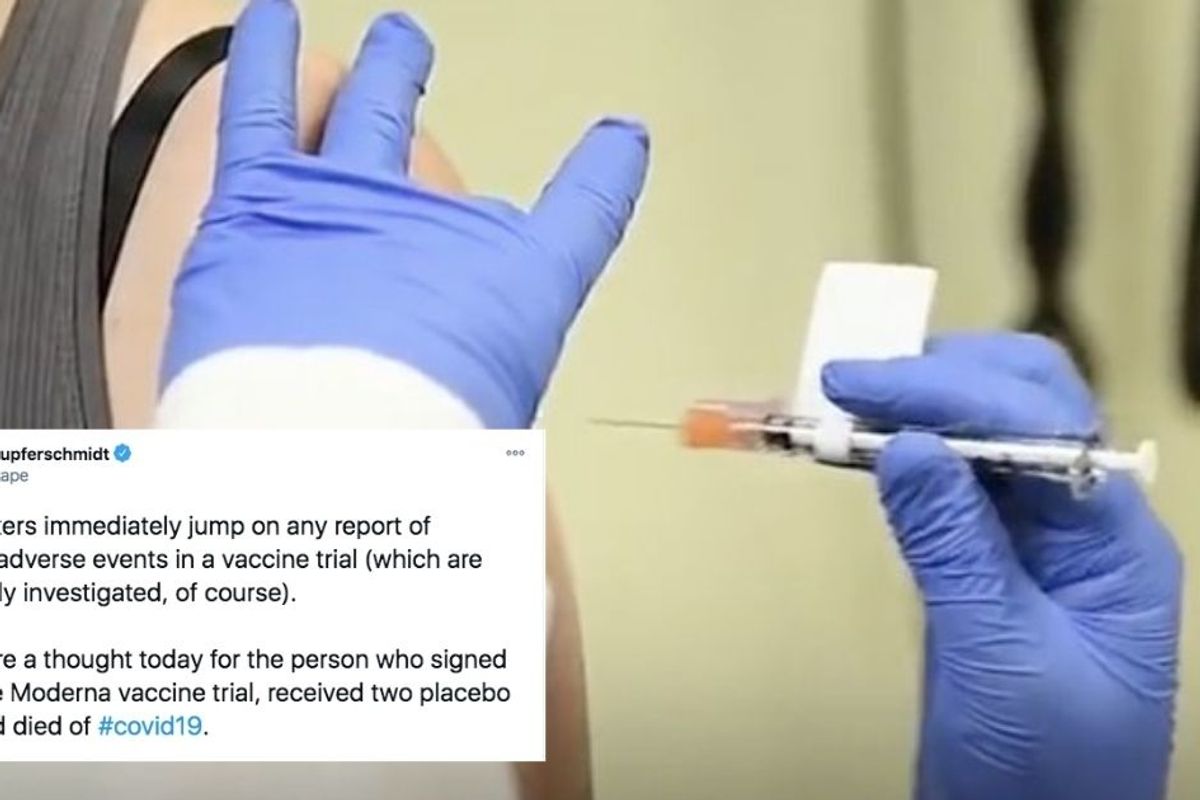 It's been nine months since we found ourselves thrust into a global pandemic the likes of which the world hasn't seen in a century. Now here we are on the precipice of administering vaccines that will hopefully put an end to it, many months ahead of the expected schedule.

The speed with which scientists and pharmaceutical companies have raced to figure out how to make a novel virus vaccine both safe and effective has been impressive to say the least. It's a testament to modern medicine, innovation, and dedication on the part of the scientists who have worked tirelessly to bring it to fruition.

As of today, Moderna is asking for FDA approval of its mRNA vaccine, which trials show to be 94.1% effective in preventing coronavirus infection and 100% effective at preventing severe cases. Pfizer's vaccine has shown similar effectiveness.

While many people may be skeptical of a vaccine created in such a short period of time, experts have expressed confidence in the safety data that's been released so far. But there's one big element to the safety data that doesn't get focused on nearly as much as it should—the courageous volunteers who literally risked their lives so that scientists could learn whether their work actually works and the rest of us can feel safe (or at least safer) getting a new vaccine.

When people volunteer to test new vaccines, they're not only agreeing to whatever surprise side effects the vaccine might cause, but they're also at a higher-than-average risk of being exposed to the disease the trial is testing for. And since trial participants don't know if they are receiving the actual vaccine or a placebo, there is very real risk of having no protection whatsoever from said disease.

While the numbers from the Moderna trial indicate a resounding success, it came with a tragic-but-necessary cost. The way a trial works is that some participants receive the vaccine being tested, and others receive a placebo that doesn't do anything. While none of the actual vaccine recipients became severely ill with COVID-19 in the Moderna trial—which vaccine researcher Paul Offit says is "absolutely remarkable"—30 of the 185 people who contracted symptomatic cases of the virus in placebo group did develop severe cases. And one person in the placebo group died what Moderna has called "a COVID-19-related death."

We don't know the name of the individual who died. But we do know that they knowingly and willingly risked their own life to save millions more, and such a sacrifice should not go unrecognized. Whoever this nameless, unsung hero was, we salute them.

Anti-vaxxers immediately jump on any report of possible adverse events in a vaccine trial (which are thoroughly inv… https://t.co/lu5KxNWkVv
— Kai Kupferschmidt (@Kai Kupferschmidt)1606742578.0

Our gratitude must also extend to those who became severely ill from the virus in the trial, as well as everyone who volunteered to take on the risks to help science do its thing.

So far, there are reported side effects that one might expect from any vaccine—tenderness in the injection spot as well as some people reporting flu-like symptoms for a day or so as the vaccine kicked their body into fighting gear—but they didn't know what unexpected reactions there might be going into it. Volunteers get compensated for travel and time they have to take off of work to go to appointments, but it's not like they're making real money. It's a real sacrifice with an unknown outcome, and many volunteers express that they signed up because they wanted to do something to be helpful.

by Leila MACOR A key facet of the global mad scramble by Pfizer, Moderna and other pharma groups to develop a viab… https://t.co/AwhaJUbur6
— The Independent (@The Independent)1606309432.0

So thank you to the tens of thousands of people who volunteered to take one for the team, putting their own health on the line to save us from further pandemic suffering. While we celebrate the scientists whose knowledge and skill and collaboration have brought us vaccines in record time, let's also cheer for the everyday folks who offered up themselves as guinea pigs to help us move past the pandemic and help humanity return to normal life. We owe them an enormous debt of gratitude.