The Earth has survived some serious catastrophes. Here are the 4 worst.

Our planet's had a bit of a rough past. But the Earth is nothing if not a survivor. 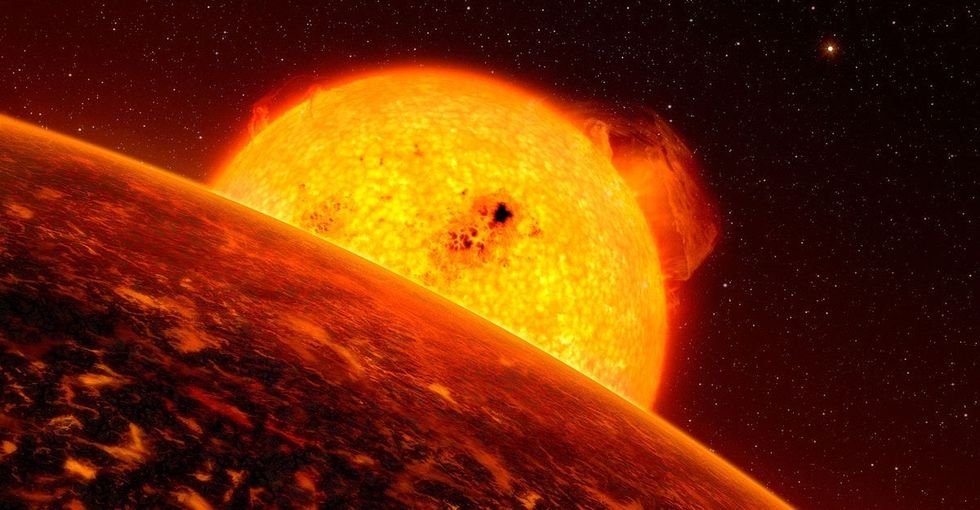 Here are the four worst things the Earth has survived so far:

1. The Big Splash, aka that time the universe punched Earth in the face and may have created the moon

Imagine a young Earth. Like, super young. Only 20 million years after the solar system even formed. A little precious baby Earth.

And then imagine the universe smashing it in the face with an object the size of Mars.

That's the giant impact hypothesis, also known as The Big Splash. Scientists who back this hypothesis think that about 4.5 billion years ago, just after the Earth formed, another proto-planet called Theia may have slammed into it, ejecting rocks and magma out into space. Ouch.

It's not all bad, though. Some of that rock and magma may have coalesced out there in space and eventually turned in our moon. If this is true, it helps explain some of the weird things about our moon, like why Earth rocks and Moon rocks look so similar.

2. The Oxygen Catastrophe, aka that time Earth's entire atmosphere turned into poison and then turned the sky blue

After surviving The Big Splash, Earth had a nice little period of time where it got to relax and, you know, enjoy being covered in magma and stuff.

Eventually, however, a combination of gas emerging from inside the Earth and meteors crashing into Earth created oceans and an atmosphere around the planet. There were even some wiggly little bacteria-like things swimming around Earth's prehistoric oceans too.

But those oceans, skies, and wiggly things would have looked totally alien to us. That's because there was pretty much no oxygen in Earth's atmosphere (which would have made the sky orange and the ocean blood-red). That was just fine for primitive life-forms, though, because if you're a little anaerobic microbe, oxygen is super poisonous.

Before oxygen, most of the Earth's atmosphere would have been methane, which would have made its surface look a lot like Saturn's moon Titan. Image from ESA/NASA/JPL/University of Arizona/Wikimedia Commons.

Then, about 2.3 billion years ago, some little upstart cyanobacteria discovered photosynthesis and decided to start pooping out oxygen. After all, for them, oxygen is just waste, right?

For about 200 million years, cyanobacteria did just that. Most life on Earth kind of ignored it until suddenly oxygen was everywhere and nearly everything died. (Way to go, cyanobacteria.)

In fact, there was so much oxygen, it broke down the methane in the atmosphere and rusted the iron right out of the oceans, which turned the ocean and sky blue.

That wasn't so bad: Earth got some nice little green life-forms, and the ocean no longer looked like something out of "The Prince of Egypt." All was well. Right?

Hahaha, no. It gets worse.

3. Snowball Earth, aka that time Earth was more frozen than a Disney movie

Scientists aren't sure whether this was a complete freeze or if there was a thin band of non-frozen water around the equator, but that's little consolation to the vast majority of the Earth, which was under ice sheets that could have been miles thick.

This probably hasn't happen just once, either. This kind of Earth-over deep freeze has happened again and again and again. The last bout of global freezing may have taken place about 650 million years ago.

But hey! Eventually Earth broke out of its little winter wonderland (possibly thanks to volcanoes), and life suddenly began flourishing like crazy!

Look at these trilobites! Image from Heinrich Harder/Wikimedia Commons.

In fact, for a while, things were going pretty well. Earth was starting to look like, you know, the Earth we know today. Too bad there was at least one more giant setback waiting in the wings.

4. The Great Dying, aka that time everything on Earth almost died

With The Big Splash, The Oxygen Catastrophe, and Snowball Earth solidly in the planet's rearview mirror, and a bunch of plants and animals running around on land, things were looking pretty good.

Then, about 250 million years ago, The Permian Extinction, a disaster so horrible scientists sometimes call it The Great Dying, happened. It more than earned its name, too. 96% of marine species went extinct as did 70% of land vertebrates.

What caused it? Scientists still aren't sure. Some think it might have been a collision with an immense asteroid or runaway methane or maybe what we now know as Russia simply ... exploding.

Either way, we know it took millions of years for life on Earth to recover. A lot of the more popular lineages of animals, like trilobites and a lot of mammal-like reptiles, were wiped out, leaving huge vacuums in the ecosystem. A few lineages did survive, however, including the ancestors of modern mammals and dinosaurs. Dinosaurs!

OH HEY, DID SOMEONE SAY DINOSAURS? Image from Dominik Reinold/Pixabay.

Look, here's the thing. I like the skies the color they are now, thank you very much. I don't want to live through seas of lava, mile-thick glaciers over Acapulco, or the skies changing color (unless you're talking about a beautiful sunset or the northern lights, of course).

Fighting climate change isn't really about saving the planet. It's about saving ourselves and the other creatures that call Earth home. No matter how cool an ice planet with red skies sounds.