Molly Ringwald watched 'The Breakfast Club' with her daughter. Her thoughts were epic. 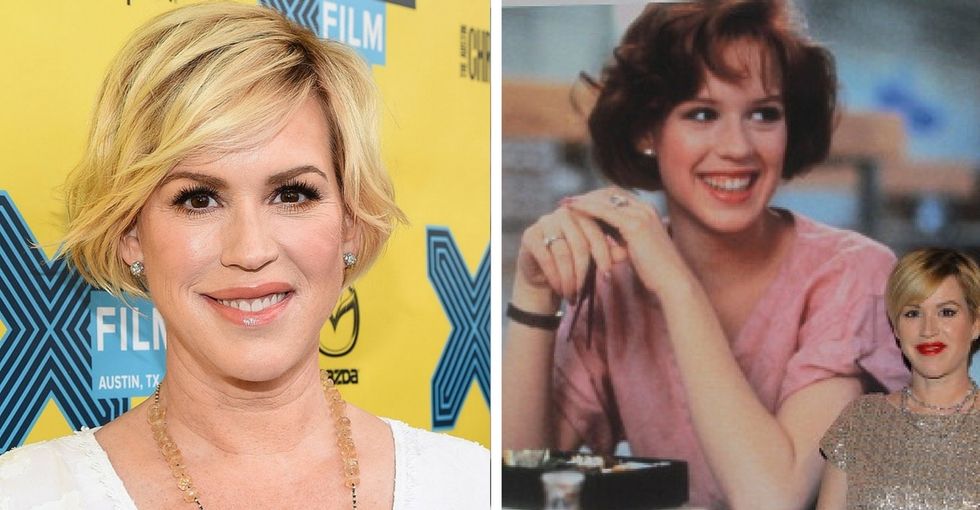 Molly Ringwald was basically the face of my adolescent years.

I was 10 years old when “The Breakfast Club” came out, and by the time I graduated from high school, I’d probably seen the film a dozen times.

“Pretty in Pink” was one of my go-to sleepover flicks with my girlfriends, to the point that we wore out our VHS copy of it (here's an explainer about VHS, for you young'uns).

GIF from "Pretty in Pink"/Paramount Pictures.

John Hughes' films served as both a mirror and a map of the turbulent teen years for my generation. Many of us saw ourselves in his quirky, awkward characters and appreciated teen life being portrayed at least somewhat realistically.

But 30-something years later, as a full-on adult, the mother of two adolescent girls, and a human being in the age of #MeToo, I'm starting to view those movies through a different lens.

As it turns out, so is Molly Ringwald. She shared her thoughts on her roles in iconic '80s films in an essay published in the New Yorker, and it was epic.

After Ringwald watched “The Breakfast Club” with her tween daughter, she couldn’t get the sexual harassment scenes out of her head.

In the film, Ringwald plays the role of Claire, the popular girl. In her essay, she opens up about how a scene where Judd Nelson’s character, Bender, hides under Claire’s desk and looks under her skirt — and then presumably touches her inappropriately.

She also shared how some scenes from her other Hughes movies now strike her as "troubling":

“There is still so much that I love in them, but lately I have felt the need to examine the role that these movies have played in our cultural life: where they came from, and what they might mean now. When my daughter proposed watching “The Breakfast Club” together, I had hesitated, not knowing how she would react: if she would understand the film or if she would even like it. I worried that she would find aspects of it troubling, but I hadn’t anticipated that it would ultimately be most troubling to me.”

As an example from “Sixteen Candles,” Ringwald points out how “the dreamboat, Jake, essentially trades his drunk girlfriend, Caroline, to the Geek, to satisfy the latter’s sexual urges, in return for Samantha’s underwear.”

In the age of #MeToo, many of Hughes’ storylines come across as normalizing unhealthy sexual dynamics at best and condoning flat-out misogyny at worst.

Perhaps Hughes was simply a product of his time. But that doesn’t make his films immune to scrutiny.

As Ringwald points out, one of the major issues with Bender and Claire’s storyline in “The Breakfast Club” is that Bender basically verbally abuses Claire throughout the film, calling her names, yelling at her, intimidating her — in addition to sexually harassing her.

And yet, in the end, he still gets the girl.

What message does that convey to young audiences? That depends on who you ask, but reading through Ringwald’s essay, Hughes appears to have had quite a history of misogynistic expression — far deeper and darker than the teen movie scenes we’re talking about and far more than what we might expect for a "product of his time."

“It’s hard for me to understand how John was able to write with so much sensitivity,” Ringwald wrote, “and also have such a glaring blind spot.”

I think she was being kind. Seriously, if you’re feeling protective of your favorite teen film or defensive on Hughes’ behalf, read her essay in full. It's an eye-opener.

Ringwald’s mixed feelings about her films reflect the tension we all feel when we realize things we love are also problematic.

“I’m not thinking about the man right now but of the films that he left behind," Ringwald wrote. "Films that I am proud of in so many ways. Films that, like his earlier writing, though to a much lesser extent, could also be considered racist, misogynistic, and, at times, homophobic.”

In the simplistic narratives that define our age, that last sentence alone might be enough for many to abandon Hughes’ films altogether.

But, as Ringwald points out, it’s not that simple. She has heard from countless fans over the years that Hughes’ films helped them feel less alone as teens. She shared a story of a black, gay man who told her that “The Breakfast Club” saved his life. He said the film showed him “that there were other people like me who were struggling with their identities."

As much as we might want to make it so, this is not an easily defined issue.

Ultimately, Molly Ringwald reminds us that our views on art and culture should be ever-evolving.

It’s easy to brush off "troubling" elements of music, film, art, and other creative works as products of their time. But we need to remain aware of how ongoing enjoyment of such works affects our culture as well as our subconscious.

Molly Ringwald and Ally Sheedy at "The Breakfast Club" 30th Anniversary Restoration at SXSW in 2015. Photo by Michael Buckner/Getty Images.

Toxic ideas about women, race, sexuality, and other identity elements are always toxic, even if we don’t recognize them as such at the time. And when we do recognize those things in hindsight, it's important to give them the analysis they are due.

The good news is that we are recognizing and analyzing those things as a smarter and more sensitive society. That's progress.

We can still enjoy a film like “The Breakfast Club" — we just need to be honest about its flaws. And I, for one, am really glad Molly Ringwald was the one to go there.