Dr. Frances Arnold won the Nobel prize for chemistry in 2018 — ​and that's not even the most impressive thing about her 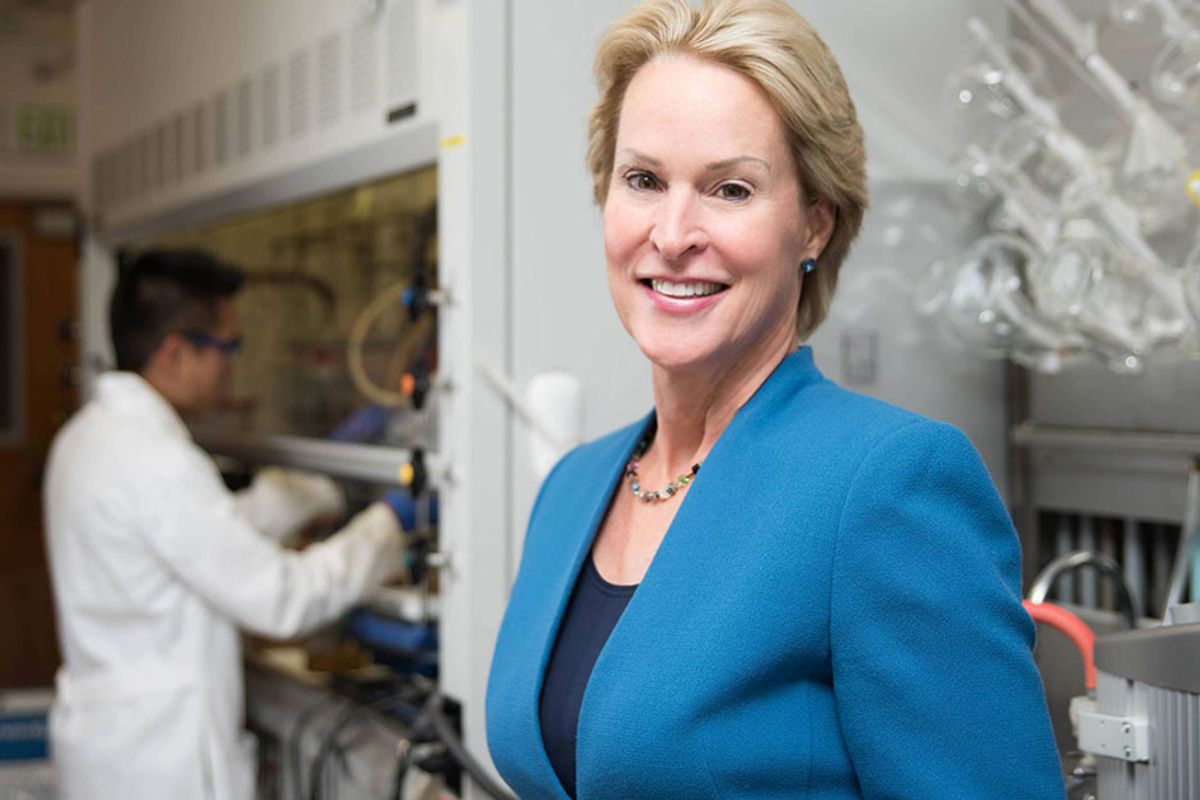 When Dr. Frances Arnold received a call from the Nobel committee telling her she'd been awarded the 2018 Nobel Prize for chemistry, she was "stunned."

When you hear about her life up to that moment, you won't be.

Arnold was never one to be told what she could or couldn't do. At 15, she moved out of her parents' house in Pittsburgh as an act of rebellion, and supported herself by working in pizza parlors, as a waitress in jazz clubs, and as a taxi driver. She went to high school — occasionally — and managed to graduate, despite collecting a stack of truancy letters along the way.

She never stopped learning, though, even when she skipped class. She was always teaching herself things, from foreign languages to music to math.

And add up it did. Despite her shaky high school attendance, Arnold was admitted to Princeton — in part, she says, because she was the only female applicant to the mechanical engineering program, and in part because her dad was a nuclear physicist Princeton alum who may have pulled a few strings. (Despite her rebellion in high school and some clashes of opinion, Arnold had a close relationship with her father. "We fought all the time," she told the New York Times. "But he understood me.")

At university, she channeled the rebellious passions of her youth into a desire to contribute to the betterment of the world. "When you're very young, you can question," she says, "but you don't know how to solve the problem. At Princeton I was given some tools that I could use to actually attack a problem, and maybe even offer a solution."

After graduating in 1979, she set out to help President Carter meet his administration's renewable energy goals, an ambition that took her around the world, from South Korea to Brazil, working on solar energy. In 1985, she earned her PhD in chemical engineering from UC Berkeley, then joined Caltech, where she has worked as a researcher and professor for most of her career.

In 1989, Arnold was awarded the prestigious Packard Fellowship, which provides funding for promising, early-career scientists and engineers. She currently serves as chair of the fellowship's advisory board and spends much of her time running her lab at Caltech.

Arnold's primary scientific achievement is having pioneered a process for engineering proteins known as directed evolution. As a self-proclaimed "engineer of the biological world," Arnold figured out how to harness the power of evolution in the lab, to push that natural design process to places it wouldn't normally go, and essentially make biology do complex chemistry for us.

"Our whole chemicals industry, our whole lifestyle, is predicated on the need to take abundant starting materials and turn them into clothing, housing, food, and medicines for seven billion people," she says. "Basically everything that supports our lives is done through chemistry. And we do a terrible job at it. Human beings do chemistry very inefficiently; we've managed to pollute the planet at the same time that we provide these products for us."

She believed that we could look to the biological world for examples of how to take cheap, abundant, renewable starting materials, such as sunlight and carbon dioxide, and turn them into the products we use in our daily lives.

"Nature does it with protein catalysts called enzymes that convert one form of matter into another, and into all of life," she says. "Hers are the most beautiful, intricate, efficient, selective, non-polluting machines that you can imagine. Why not learn from the best?"

As Arnold says, "Nature can do chemistry we never dreamed was possible." Rather than figure out all of the intricate details of how those complicated processes work and try to recreate them, the scientists in her lab simply direct those natural processes to do chemistry more efficiently.

The possibilities that Arnold's work has opened up are practically limitless, but she remains laser-focused on sustainable development. "All my projects are about sustainability, bioremediation, and making things in a cleaner fashion," she told the Times. "Students come and say, I want to help people. I say, people get plenty of help. Why don't you help the planet?"

For example, one of the innovations she is spearheading with two former students who started a company called Provivi is to make non-toxic insect mating pheromones cheaply to use for crop protection. Pheromones can be released over crops to create sexual confusion in agricultural pests so they won't mate, thereby reducing or eliminating the need for pesticides.

So here we see an ambitious woman who is not only solving global problems, but doing so in a highly male-dominated field. She has won multiple coveted awards, including a Nobel prize. She speaks several languages, plays three musical instruments, and has personally been invited to meet the Queen of England and other heads of state.

It would be easy to think Arnold was just blessed with a charmed life, but that's not so. While building a successful career, she's also had to overcome a series of tragedies that would flatten many of us.

After her first marriage ended in divorce, her ex-husband died of colon cancer and she was left raising their young son on her own. Three years later, in 2004, she was diagnosed with breast cancer. It spread to her lymph nodes and she went through 18 months of surgeries, radiation, and chemotherapy, treatment that she said ruined her previously photographic memory.

In 2010, she lost her second husband, cosmologist Andrew Lange, to suicide. And in 2016, the middle of her three sons, William, died in an accident, which she still can't bring herself to speak about.

Arnold's life has been marked by crisis and victory, tragedy and triumph — and she has some words for those who express awe at her resilience.

"Nobody is guaranteed an easy life," she told the Times. "Look at the people in Syria. I have friends who are Holocaust survivors. What was I supposed to do? Give up, say I can't go on? No. I had three children. I had a group of young people in the lab. Why would I give up?

"You can't avoid challenges," she says. "You can only overcome them. You don't have control. Loved ones will die. You will not get the job that you really want. You will be laid off. Someone's going to criticize you. It's going to happen. How you respond to it dictates whether you will be happy or not."

Arnold is a unique woman by any measure. And part of what makes her a unique figure in science is her diverse skill set and knowledge beyond the lab. She approaches chemistry and biology not only as an engineer, but also as an artist and musician. Perhaps that's what has enabled her to think outside of the traditional scientific box and ignore the naysayers she's encountered throughout her career.

"You look at the code of life," she says. "To me, that's like a Beethoven symphony. It's something I could not compose. It's something intricate. It's stunningly beautiful. I can't compose it, but there's this machine, this evolutionary algorithm, and you just turn the crank, make random changes and select for function, and out comes all this wonderful diversity. Out comes all the life that you see around you. That has come out of this machine of natural evolution. I want to make a machine like that for artificial evolution. That's what we've been able to do, so now I can decide what I want my symphony to do. How does it make you feel? How does it give you something that you did not have before? I can turn the crank of evolution and create my own symphony."

Ultimately, she says, "I'm a builder…I love to build things. And if it's molecules, that's called chemistry. I love to create something that never existed before and that can also serve a purpose. I'm not a composer. I love music, but I can't compose. I'm not a poet. I love poetry — I'm not good at composing words. But I can compose molecules."

Her primary goal is to compose a molecular symphony that will create a cleaner planet for us all. "I want to take biology where it would never have gone, because I want to put it in service of helping humans live on this planet without destroying everything else."

Related Articles Around the Web
Culture