Why In-N-Out is the best fast-food restaurant you probably can't eat at.

In-N-Out fans are completely right to brag to their East Coast friends. 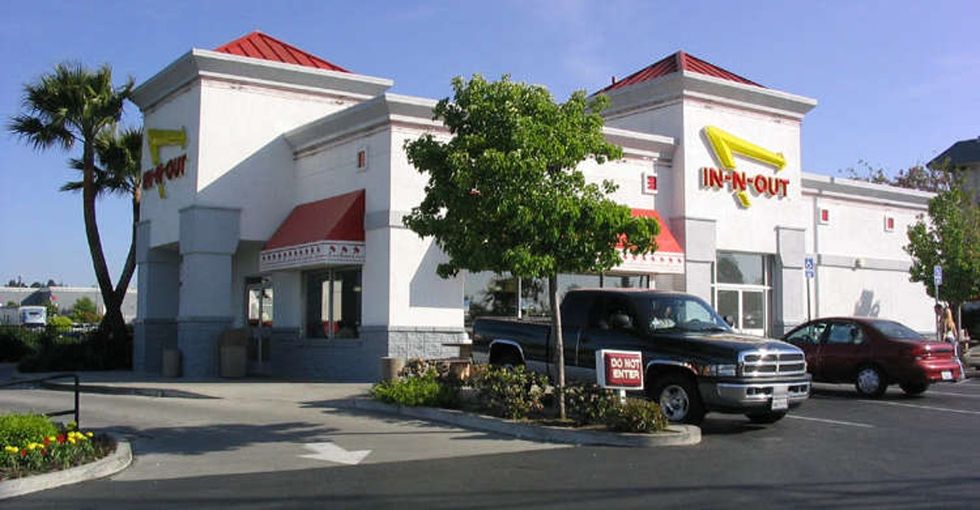 In June 2015, I wrote an article titled "5 incredibly delicious chain restaurants you should never, ever eat at and 1 you should but can't." In it, I explained why — despite the scrumptiousness of the meaty, cheesy, and meatcheesy creations at Papa John's, Sonic, Wendy's, Cracker Barrel, and Chick-fil-A — you should really resist the demonically primal urge calling you to eat there. (Spoiler alert: They're up to no good.)

But there was one chain restaurant that soared high above the rest. One swan in a gaggle of ducks. One Beyoncé in a sea of Kelly Rowlands and Michelle Williamses. And sadly, you also probably can't eat there — but not for the reason you might think.

Here, excerpted, adapted, and updated from that earlier piece, is the entry on the king-mommy-daddy-el-preidente of them all: In-N-Out Burger.

(We weren't paid to run this, by the way. I know it might seem that way, but In-N-Out just has an ... effect on people.)

It gives me no pleasure to break this to you, but you probably can't eat at In-N-Out Burger.

You may not realize it yet, but this is a problem for you.

This is what a triple-triple from In-N-Out looks like.

Stop it. Photo by Christian Razukas/Flickr.

This is it. The most delicious burger on the planet. You can keep your Shake Shacks, your Five Guys, and your Smashburgi. This is truly, madly, deeply the one.

The meat is fresh, juicy, and savory. The cheese is drippy and salty. The lettuce adds texture. Texture!

If you actually took one of those burgers and put it under a microscope, this is what you would see.

If you zoomed even further in, you would learn the exact moment you were going to die. To this day, no one has done it. Painting by Johann Liss/Wikimedia Commons.

And the best part? The burgers are super cheap.

There aren't enough superlatives in the world to do the place justice. There is no greater pleasure in this world than the taste of an In-N-Out cheeseburger. That's a fact.

And I've been to a Bon Jovi concert.

More importantly, In-N-Out proves that it is possible to operate a profitable, reliably delicious fast-food chain in 2015 and not be a complete ethical idiot.

It is one of very, very, very few high-profile companies in America owned by a woman.

And, perhaps, most importantly:

The average In-N-Out crew associate makes $11.61/hour (as of June 2015, according to a Glassdoor survey. Not bulletproof data, but a decent ballpark estimate). That's ... not amazing in the grand scheme of things but a fortune by fast-food standards.

The ingredient sourcing is so quality, rapport between employees and customers is so friendly, and working conditions are so baseline satisfactory, that a former employee recently praised the company as the "best fast-food chain in America" in Business Insider — supporting her claim with a series of mouthwatering, behind-the-scenes (and in-front-of-the-counter) Instagram photos.

Now, I'm certainly not suggesting that all In-N-Out employees feel this way, but the fact that even one does is a pretty big data point. I've worked a lot of places. I would be pretty hard-pressed to call any of them the Best Anything in Whatever Country, even the ones that paid me on time and had free snacks on Thursdays.

(If my boss is reading this, which she is, because I am a writer and she is my editor, Upworthy is the Best Media Company in All Countries Ever In History.)

To get a vote of confidence like that, the chain must really be doing something right.

Do not forget. Never forget.

You can't eat at In-N-Out Burger because you are probably among the approximately 76% of Americans who don't live in California, Arizona, Oregon, Nevada, Utah, or Texas.

As your West Coast friends probably never fail to remind you every single day of your life, In-N-Out burger is their secret special thing.

And as much as I hate to admit it, they're basically right. As of July 2016, In-N-Out burger is only available in six states. And, statistically speaking, you probably don't live in one of them.

When asked when the chain would ever go public or franchise — moves that could signal a possible expansion east — In-N-Out president Lynsi Snyder had a not-so-ambiguous reply.

"Never," she told CBS, presumably after rubbing salt in the eyes of a dozen orphans and kicking your dog down a flight of stairs.

Move to California, Nevada, Oregon, Arizona, Utah, or Texas right now. And go get yourself an In-N-Out Burger.

You will thank me tomorrow.

And every day. For the rest of your life.