The San Diego River is fighting a battle against trash. This team is helping it win. 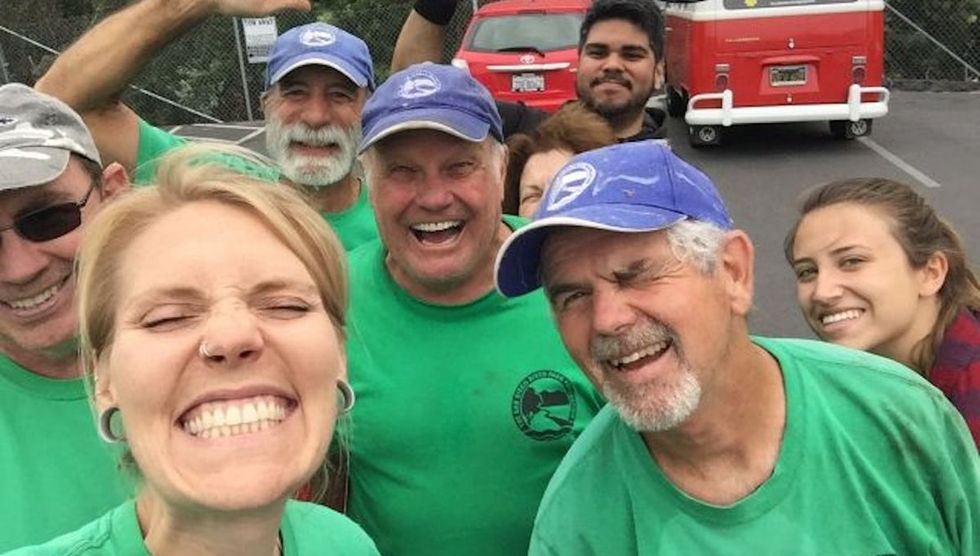 There are many words you could use to describe the San Diego River: beautiful, vital, and majestic only scratch the surface.

All photos in this post courtesy of The San Diego River Park Foundation.

If you've ever been to San Diego, you've likely heard some people refer to the river as an "emerald ribbon." It's 52 miles long and winds its way down some of the most vibrant vistas in southern California.

Walking along the riverbank, you may see one of the hundreds of species of birds that live or migrate through the area including the black-chinned hummingbird, the California condor, and the golden eagle.

On the ground, you might see a brush rabbit. Or come face-to-face with a grey fox. And, if you're really having a good animal-spotting day, you may run across a mule deer. You'll definitely brush by an abundance of vibrant plants.

While we all know that natural parks and waterways should be treated with respect and care, we still have a tendency to leave our litter without being mindful of it. And it often ends up polluting green spaces like The San Diego River.

Some of this trash is storm debris that washes its way down explains Juan Salgado, a volunteer leader with The San Diego River Park Foundation.

Other trash is carried into the river by the wind. But there's another, less accidental reason trash accumulates in the water and on the riverbank: People toss their garbage from their car windows as they drive by the river. While they may not think much of it, the empty soda cans and chip containers build up, endangering the wildlife that depend on that river.

It's the reason Salgado spent over 175 hours last year volunteering with The SDRPF. "I saw the massive amounts of trash," he says. He knew he had to do something about it.

The San Diego River Park Foundation is on a mission to restore the river to its original glory. Its volunteers are making that mission a reality.

"The San Diego River Park Foundation has a vision of achieving a trash-free river." This will not only make riparian habitats healthy for plants and animals, but also keep local green spaces beautiful and safe for people to relax and recreate in."

Volunteers are a vital part of this goal. To help keep the San Diego River trash-free, the organization appoints volunteers to scout ahead and find trash. Then, the SDRPF mobilizes volunteers to clean up the area. In 2018, they had 2,050 people helping with this work.

"Between these two tasks, volunteers are out along the River at least four times per week," says Welborn.

"Some people come out two or more times a week to haul soggy cushions, dig buried bicycle wheels out of the ground, and load heavy trash bags."

And if you want to help the river without actually getting your hands dirty, you can do that, too. All the organization's trash bags, trash pickers, gloves, and dumpsters come from donations from people who also want to see the river clean.

The cleaning The SDRPF has done isn't just important. It's transformative.

At one point, there was so much trash in parts of the river that volunteers had to wade into it hip-deep. These areas now, Welborn says, are nearly trash-free.

"The difference that dedicated volunteerism and directed enthusiasm can make is astounding!"

For volunteers like Salgado, it's rewarding to be able to see the amazing difference he's made by helping de-trash.

"It's incredibly gratifying after three hours of digging through mud and dirt and lugging 40-50 pound bags of trash uphill, to look back on the space I just worked on and see nothing but the dirt, grass, and water that should be the only things there," he says.

"Our efforts have turned something that most people thought was an unlined storm drain into a beautiful bit of nature that runs directly through the center of a huge city."

Of course, that feeling of pride sometimes comes with a tinge of disappointment. The battle with trash is never-ending. But it can be won. It just requires all of our support.

If you want to help keep nature clean, beautiful, and inhabitable, you absolutely can. It just takes commitment, and sometimes, getting a little dirty.

"The problem of trash in local green spaces is an ongoing issue," Welborn says. "For anyone who's interested in solving this problem, local organizations and dedicated volunteerism can make a real difference."

Getting involved is as easy as looking for cleanups in your local area. Or starting one yourself. If you do the latter, Welborn offers this piece of advice: Be prepared for the enthusiasm to be so infectious that you won't be able to help coming back to continue working to make the green spaces pristine.

"The atmosphere of a cleanup is so uplifting," she says. "Everyone is working hard, collaborating, and cracking jokes. Once you come to one, you might get hooked!"

Philadelphia is taking the city back to the past.

Remember when calling your parents, a tow truck or a friend when you were out and about meant digging in your pocket for a quarter to make a pay phone call? Well, a Philadelphia-based collective, PhilTel, is jumping into the past with a modern twist, by installing free-to-use pay phones throughout the city.

Of course, the pay phones that many of us grew up were removed from public places years ago. There no longer seemed to be a need for them when most people had a phone in their pocket or in their hand. But it's easy to forget that not everyone has or wants that luxury. For some people, staying that connected all the time can be too much and for others, it's simply financially impossible to own a cell phone.

Keep ReadingShow less
Get stories worth sharing delivered to your inbox
By signing up you agree to Upworthy's privacy policy.
popular

Think all cats are the same? These pictures prove they each have their own personality

Photographer Nils Jacobi shows how cats aren't nearly as aloof as one might think.

People often mistakingly attribute a singular personality to cats—usually the words "aloof" or "snobby" are used to describe them. At best, they might be given the "evil genius" label. But in actuality, no two cats are alike. Each has their own distinct ways of being, whether that’s silly, sophisticated, affectionate, downright diabolical or somewhere in between.

This photographer has the pictures to prove it.

Nils Jacobi, better known online as furryfritz, the catographer, has photographed literally thousands upon thousands of cats—from Maine coons who look like they should be in a perfume ad to tabbies in full-on derp mode.
Keep ReadingShow less
Get stories worth sharing delivered to your inbox
By signing up you agree to Upworthy's privacy policy.
Trending Stories
parenthood
Pop Culture