This thousands-year-old Alaskan whaling ritual still exists … but maybe not much longer. 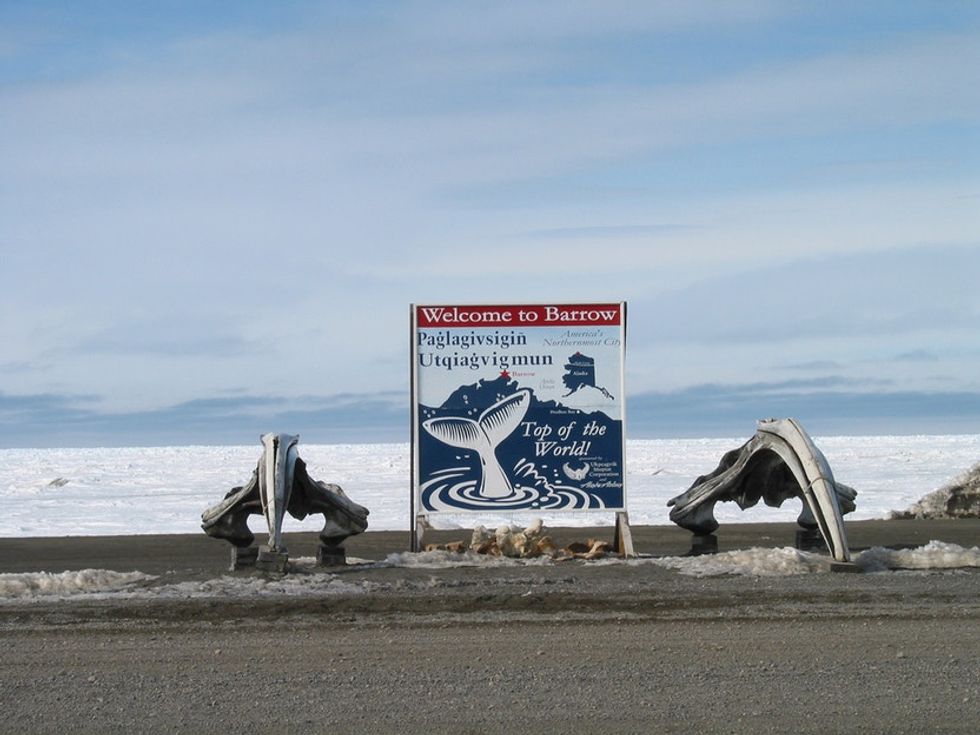 Each June, the Inupiat community of Barrow, Alaska, kicks off the summer with a harvest festival called Nalukataq.

This annual ceremonial feast is as full of fun as it is reverence. There's singing and dancing and blanket-tossing and plenty of muktuk (fried whale blubber) and other traditional foods, sandwiched between solemn moments of prayer and reflection. People of every age and gender participate, celebrating their culture and showing their appreciation for the hard work that got them through another frigid winter.

But mostly, the festival is about their beloved bowhead whales.

Barrow is the northernmost town in the United States. Which means that everything from Oreos to toilet paper has to be airlifted in.

Even the most well-stocked supermarkets, which do exist, still need to mark up all their merchandise in order to cover the costs of getting things on the shelves in the first place. As a result, the cost of living there is astronomical, even by today's standards.

Put another way: It's actually easier to get a bunch of people from Barrow together to hunt a whale than it is to buy a box of cereal. After all, a single 90-ton bowhead whale can provide a lot of things for a lot of people, if you know how to put all the parts to good use — which the Inupiat community certainly does.

Just a quick bite of muktuk.

The prospect of whaling might not sound ideal. But it's actually been a staple of the Inupiat culture and diet for more than two millennium.

They're not just tracking and killing these majestic leviathans for fun either; they're doing it because it's a necessary part of their lives.

And that's where the religious aspects of the Nalukataq celebration come into play. The Inupiat see the whale as something sacred, and the festival is their way of giving thanks to these mighty creatures.

"Our people are out on the ice providing the nutritious food from the bowhead whale," explained Inupiat activist Rosemary Ahtuangaruak in an interview with The Guardian. "We cannot replace those foods in our diet — not from shop foods out of a box."

An Inupiat whaler from a family of captains.

In fact, there's a special concession in U.S. law that allows for 50 whales to be hunted each year between all of the Inupiat communities — but absolutely none by commercial whalers.

Again: No one is particularly excited about killing any more of these gargantuan sea mammals. We've all seen the "Save the Whales!" campaigns. But those are more of a response to the commercial whaling industry, which was so eager to profit off the slaughter of these beautiful beasts that it drove the population nearly to extinction in just a few hundred years.

By contrast, the Inupiat found a way to make whaling into a sustainable and sacrosanct practice that allowed the whale population to thrive for thousands of years while also providing necessary food and supplies for their people. And that was long before the U.S. government came along to regulate it, too.

It's certainly important to protect the whales. But we would also endanger the Inupiat if we completely took away their livelihood — and they're already in enough danger as it is.

A full 25% of Native Americans and Alaskan Natives live in poverty, which means those marked-up grocery store prices in places like Barrow are just the even-more-frustrating icing on the hardship cake. Without their cherished whaling rituals, they'd have even less access to the food and clothing that they need to make it through the hardest seasons.

Oh, and just to make things even worse, a little thing called climate change is now threatening their ability to provide for themselves as well. Rising temperatures and the influx of industrial oil drilling are threatening to disrupt the migratory patterns of whales and other Arctic animals, too. In fact, there are even some Alaskan communities whose towns are actually melting away thanks in no small part to companies like Shell and oil drilling.

"The ecosystem renewal, which is needed for the many different animals that migrate here, is important because we are feeding our families from the ocean. We must keep this environment pristine," explained Rosemary Ahtuangaruak.

C'mon, that's adorable. You don't want to see that kid get hurt, do ya?

While this is about protecting the whales, it's also about cultural preservation and having respect for all living creatures.

Before we go scolding anyone for killing whales, let's consider the fact that conditions for some Indigenous communities are really bad. So the least we can do is help to preserve one of the few thriving communities left. After all, we're the ones who started this whole environmental mess — so it's up to us to get ourselves out of it, and that includes helping out the people who are suffering the brunt of it.

If you're interested in learning more about the Inupait, here's a wonderful look at the annual Nalukataq whaling festival: