This American town is being swallowed by the sea, and there's no one stepping up to save the people. 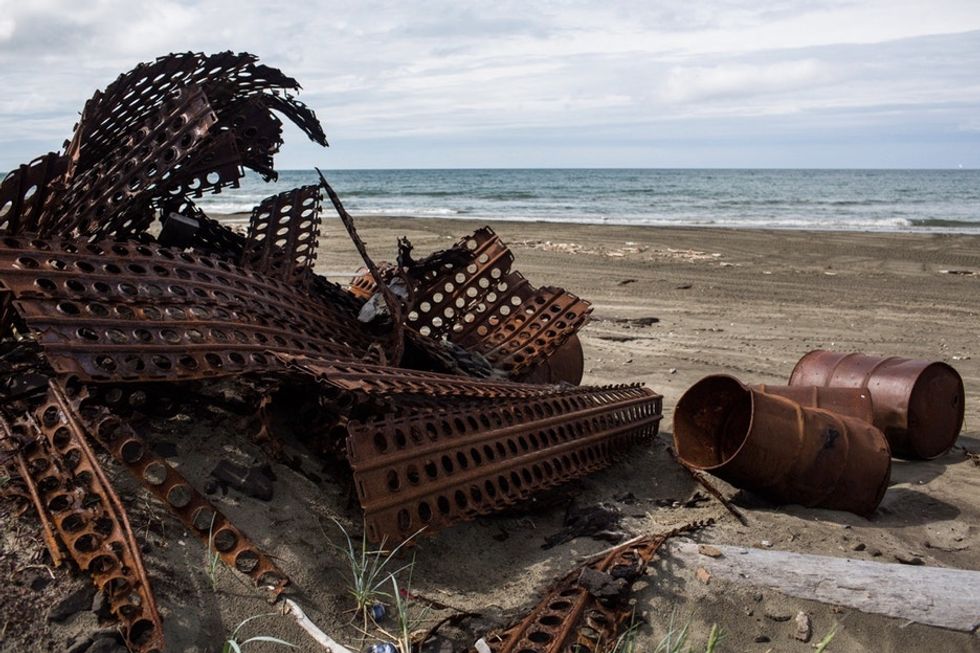 It was 2002 when the residents of Shishmaref, Alaska, voted to move their entire town.

The writing was on the wall — or, perhaps more accurately, the water was splashing up between their toes.

The shores of their small island home off the western coast of Alaska had been eroding for decades, with anywhere between three and nine feet of shoreline being swallowed up by the Chukchi Sea on a good year.

While their island status posed its own unique issues, Shishmaref was just one of the 31 Alaskan towns facing this exact same problem.

They put together an action plan for relocation and submitted it to the federal government.

It would be another two years until the U.S. Army Corps of Engineers completed their own assessment of the situation. Based on their findings, it would cost an estimated $179 million dollars and between five and 15 years to move the 600 residents of Shishmaref to a new location on the Alaskan mainland. 11 potential new locations were then identified — but of course, that took some time as well.

Meanwhile, the town constructed a 200-foot long seawall to protect the northern coast of the island, a temporary solution to slow the effects of erosion while they awaited the bureaucratic process.

The Tin Creek relocation area was just 12 miles across the inlet from Shishmaref, which meant that residents who relied on hunting and fishing would still have access to their same game spots.

While they waited for plans to fall into place, the residents of Shishmaref had to build two additional extensions to their protective seawall, bringing it all the way to 2,800 feet in length.

Sure, it sapped some of their already-limited resources to keep adding on to this temporary barrier in a place they wouldn't be for very much longer. But it was all worth it because the threat of rising sea-levels caused by melting polar ice caps in the increasingly-warmer Arctic climate would soon be a distant memory.

OK, well, technically it would still be all around them, but at least their homes wouldn't actually be falling into the water anymore ... right?

It's 2015, and Shishmaref is still exactly where it's always been — only now it's an even smaller sliver of land.

It's not because they're stubborn or beholden to their homes. Frankly, there's no good reason for it at all, and there's no one thing to blame.

It could have something to do with the fact that the Tin Creek relocation area turned out to be a melting plot of permafrost that's facing the exact same problems as modern-day Shishmaref. Or it might have to do with the the cost of living in Alaska, which is already too high — especially in a place like Shishmaref, where 30% of people already live in poverty and a roundtrip ticket off the island costs nearly $400 per person.

Maybe they're still stuck there waiting for help that might never come because the funding for the relocation project all fell through — which in turn might have something to do with the fact that their only champion in Washington, D.C., was arrested.

Or it could be because federal relief funds are reserved for sudden natural disasters such as hurricanes, and rising water levels aren't considered an emergency because we've known about the disastrous effects of climate change for so long but have never done anything about it.

Personally, I think Occam's Razor makes the most sense and that the federal government simply can't be bothered to spend millions of dollars on a handful of poverty-stricken Inupiat in a remote corner of the country.

Whatever the reasoning, one thing is sure: We have left our fellow U.S. citizens to drown in the wake of a manmade disaster.

It's only a matter of time before what happened to Shishmaref happens to the mainland United States.

That's not hyperbole. At the rate we're going, the coastal parts of the country, including California and New Jersey, are headed toward their own watery graves. Even if you feel safe in landlocked state, it'll still have disastrous results for the economy (and of course, the effects of climate change won't stop there).

So maybe, just maybe, it's time we do something about it?

We can start by demanding that President Obama protect the Arctic Circle, which will maybe give our Alaskan neighbors a fighting chance before they're totally devoured by the Chukchi Sea. In turn, that might help slow the effects of climate change for the rest of us as well.

You can also support the Alaska Coastal Villages Relief Fund for the Support of Children and Families or give directly to any of the other Alaskan towns that could use your help to fund their relocation efforts.

Here's a trailer for a full-length documentary film titled "The Last Days of Shishmaref," in case you haven't seen enough: