This bold Republican tore her party's platform to shreds and for a great reason. 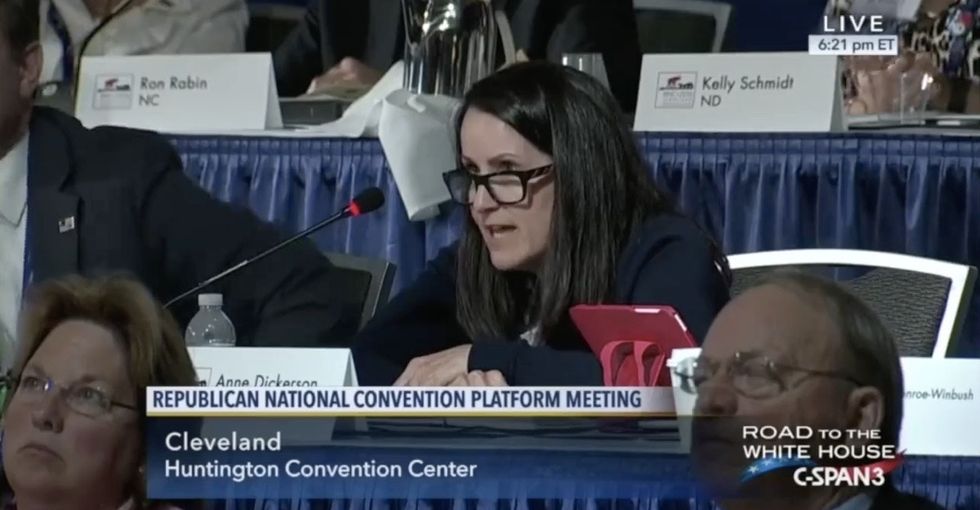 On July 11, 2016, ​the Republican party got together to put the finishing touches on their platform for the upcoming election.

The platform — which outlines what the party stands for and aspires to — is a handy resource for voters and politicians alike.

It's basically a sales pitch to the electorate and a way to measure how views change among the party's members over time.

And for some people, a relatable platform may sell them on the idea of voting in favor of a party's candidates. For others, an unrecognizable or frustrating set of values might indicate the party isn't the best fit for their personal ideologies anymore.

During that meeting, a woman named Annie Dickerson surprised everyone by offering up a passionate plea for a new set of compassionate values.

She proposed that the party act with compassion on a topic that has always been a bit controversial among Republicans: LGBTQ rights.

Historically speaking, the Republican party has never been especially LGBTQ-friendly. Whether the discussion is related to marriage, parenting, employment, housing, or public accommodations, the party line has remained firmly anti-LGBTQ over the course of time.

Dickerson, who's a member of the platform committee, hoped to change all of that with her speech.

First, she spoke out against language arguing that children of gay and lesbian couples are more likely to be involved with drugs, commit crimes, and wind up in poverty — none of which is supported by evidence.

Then she urged her colleagues to scrap language in support of "traditional marriage and the families a husband and wife create," in favor of more inclusive language simply stating that children need a "loving and stable home." She also argued against the platform's "salute" to the state of North Carolina for its anti-LGBTQ law. And she begged them to show some empathy, to take a stand on the right side of history.

Sadly, though, she mostly stood alone while giving this speech. In the end, most other members of the platform committee adopted anti-LGBTQ positions instead.

Support for various LGBTQ issues is on the rise across the political spectrum. As a group, Republicans are still less likely than Democrats to back rights like marriage and employment protections. But individually, it looks like change is underway.

You may not hear prominent Republicans speaking out in favor of things like gay marriage (nominee Donald Trump has promised to appoint judges he believes will overturn the Supreme Court's 2015 marriage equality ruling) or civil rights for trans people (earlier this week, RNC speaker Ben Carson referred to transgender people as the "height of absurdity"). But it's important to remember that there are people like Dickerson within the Republican Party offering passionate arguments for change.

Maybe it takes people like Dickerson who will continue to step up and ask for compassion and empathy to change the party line. By 2020, maybe the party will reverse course on some of the more explicitly anti-LGBTQ positions. And maybe, following this fall's election, it'll become clear to those in power that political success cannot be built on the exclusion of others.

No matter what happens, I'm thankful for people like Dickerson.

You can watch Dickerson's speech to the RNC platform committee below.