There's been a welcomed shift in how we see men like Bill Cosby. Here's why. 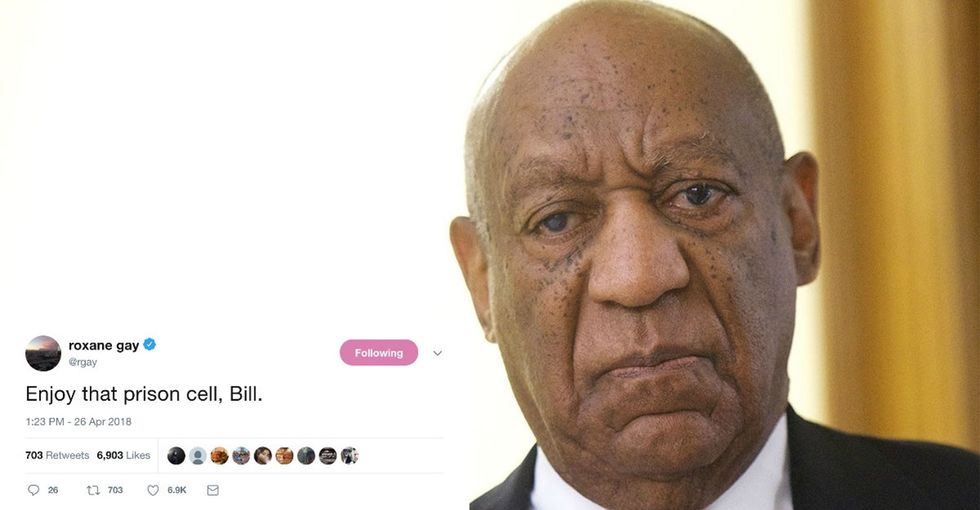 Women around the nation are cheering as a former television powerhouse was brought to justice.

On April 26, Bill Cosby, 80, was convicted of three counts of aggravated indecent assault.

The charges, brought against Cosby in December 2015, were first taken to trial in 2016 but ended in a mistrial because of a deadlocked jury. The case against Cosby was granted a retrial despite attempts of dismissal from his attorneys, and the case was heard in April 2018 in a Pennsylvania courthouse, where the jury entered a verdict of guilty on all charges.

Women at the courthouse and around the nation reacted with pride, gratitude, and a sense of relief that justice had finally been served.

The well-known comedian, actor, and producer is most recognized as the beloved dad from "The Cosby Show." For decades, the actor led a seemingly respectable, revered life, to the point where he was viewed by many as self-righteous. But, thanks to the raised voices of several women, including Andrea Constand, a very dark truth finally came to light.

Andrea Constand successfully made her case in a retrial against Bill Cosby. Photo by Mark Makela/Getty Images.

According to Constand's testimony, in 2004, Cosby drugged and raped her in his home.

"I was kind of jolted awake and felt Mr. Cosby on the couch beside me, behind me, and my vagina was being penetrated quite forcefully, and I felt my breast being touched," Constand told the jury. "I was limp, and I could not fight him off."

Constand sued Cosby years ago, but Cosby was never charged, and the case was eventually settled. It took this retrial to finally receive any justice.

Constand's story wasn't unique. To date, more than 50 women have accused Cosby of criminal acts, including rape and sexual assault.

The face and figurehead of one of the most beloved shows in American television history, Cosby’s downfall seemed unlikely. A formerly revered celebrity, he was a person many believed in and admired. Cosby's character, Heathcliff Huxtable, was a loving father, leading an affluent black family — a rarity on television screens in the 1980s and '90s. For many, it was difficult to separate the character from the man, particularly since there had been such little prior representation of positive black male figures. Even more, Cosby was a wealthy, powerful man who used money and character assassinations against his victims to cover up his crimes.

Thanks to #MeToo — and the dozens of women who came forward prior to the movement’s rise — judicial standards for how to deal with those accused of sexual assault are starting to shift.

Originally created by Tarana Burke, the #MeToo movement has taken the world by storm. Not only is it amplifying the voices of sexual assault survivors, it's also helping bring about real justice against powerful men who've been able to get away with their crimes and condemning those who've been complicit in their behavior.

"You have to really fight to get people to pay attention to sexual violence as an issue, specifically as a social justice issue," Burke said.

Cosby’s conviction came just after some speculation claimed that the recent #MeToo movement likely wouldn’t play a role in the case. The movement had certainly gained traction, but it was unclear if the changing norms and visibility of sexual assault would make it to the courtroom. Thankfully, it appears they did.

What's next for Cosby? Each count of assault can incur up to 10 years in jail, so he's facing a maximum sentence of 30 years. While it's unclear how his sentencing will play out, one fact remains transparent.

Power and privilege no longer have a place in our courts when uplifted, empowered women have the space and capacity to raise their voices.

Hopefully, Constand is able to feel some sense of relief about justice being served and can inspire other women who've gone through similar experiences to fight for what's right. Our judicial system holding Cosby accountable is on behalf of brave, outspoken women who chose to no longer be silent. Our world is slowly but surely becoming better for it.

Sometimes sighted people can easily forget that beauty isn't just something for the eyes to experience. It can be heard, smelled, and touched as well. Nowhere was this more evident than at Anthony and Kelly Anne Ferraro's wedding on October 2.

Anthony is a blind Paralympian and winner of the gold medal in the 2018 USA Judo National Championships for Blind & Visually Impaired. He's also an accomplished guitar player and motivational speaker.

Kelly Ann wanted her husband to experience her in a beautiful dress so instead of having one designed that was pleasing to the eye, she reached out to Loulette Bride to make one that felt amazing to the touch.

"Kelly really wanted to ... make it really special for me," he told Newsweek. "She went above and beyond" to find the wedding dress, which was made "tactilely pleasing" with use of chiffon, lace, silk, and velvet.

From Your Site Articles
Related Articles Around the Web
pets
Get stories worth sharing delivered to your inbox
By signing up you agree to Upworthy's privacy policy.
Trending Stories
officer cleaning up memorial tiktok
Cities