The moving story of Judith and Joyce Scott will make you believe in twin magic.

Look what love can do. 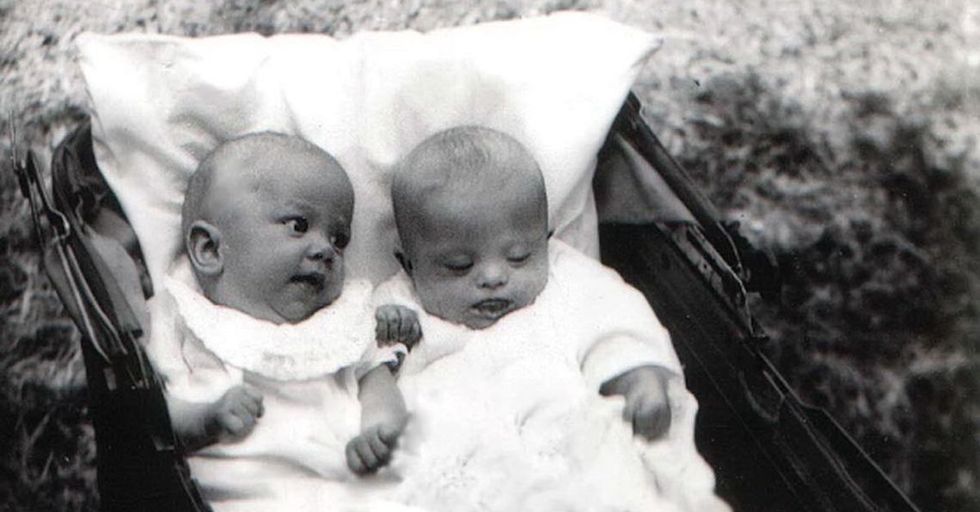 It's a story with everything you'd imagine in an Oscar-winning movie: an idyllic childhood, heart-shattering loss, an emotional reunion followed by triumph, and resounding artistic acclaim. Above all, it's two sisters who loved each other beyond adversity and through everything. And it's 100% true.

Joyce and Judith were born in Cincinnati in 1943. Judith had Down syndrome and Joyce did not. The sisters were loving and devoted to each other.

For the first seven years of their lives, they spent most of their days playing in a sandbox made just for the two of them. They slept in the same bed at night.

But their parents grew overwhelmed and desperate. They didn't know how to interact with Judith. Along with Down syndrome, she couldn't speak and had undiagnosed deafness. The medical community at the time knew very little about how to engage children with Down syndrome and recommended institutionalizing her. Her parents gave in.

At age 7, Judith was sent to live in a sanitarium. She remained there for the next 25 years.

During that time, her sister Joyce grew up. But she couldn't shake the memories of her sister.

By the time she was 25, Joyce had graduated from college, moved to California, and started work as a nurse specializing in care for children with developmental disabilities. She befriended the mother of one of her patients, joining her on silent meditation retreats. Five days into a six-day retreat, Joyce had an epiphany.

"I had this feeling that I was there with Judy and that our core was a central core that we shared. It was like someone turning on the light in a dark room. It became clear to me: ‘What on earth is she doing in an institution 2,000 miles away when she could be with us?'" Joyce told an interviewer last year.

Just like that, Joyce's life changed. She assumed guardianship of her sister and brought her home to California. Their family was finally whole again.

As the sisters adapted to their new life, Joyce learned about Creative Growth, an enrichment center for developmentally disabled adults.

She began taking Judith there five days a week for painting and drawing classes, hoping something would spark her creativity.

For two years, nothing clicked. Then one day, a textile artist came to give a presentation. Judith was transfixed. She picked up two sticks and began slowly, methodically wrapping them in strips of fabric.

That wrapped bundle became her first sculpture. Over the next 18 years, she would create more than 200 more.

Her sculptures defy convention and definition. They're simple and intricate, colorful and muted, commanding and gentle.

The unifying feature of Judith's work is wrapped fabric. Her pieces range in size from tiny handheld sculptures that resemble dolls to huge installation pieces that cannot be moved without help. She wasn't particular about her medium, working with whatever items were around the Creative Growth studio.

Nor was there a particular rhythm to her process. She worked exactly as long as a piece took to finish — whether that was an hour, a day, a week, even a month.

An exhibition of Judith's work at a gallery in Brooklyn, New York.

Judith Scott had almost no interaction with her artworks once she finished them. The exception was when she saw them at her first art show. According to her sister, Judith wandered among the works and, one by one, kissed or hugged them. "There wasn't a dry eye in the house," recalls Joyce.

In 1999, Creative Growth held the first showing of Judith's work to coincide with the release of the first book about her. It drew worldwide attention, which meant more admirers and more books for Judith, along with documentaries and news articles.

Judith was both nonverbal and illiterate, with no way to share the inspiration behind her creations. Everything — even the names of the artworks themselves — is up to the viewer's interpretation.

"Judith's sculptures, objects, things are, to my mind, amongst the most important three-dimensional things made in the last century. There is no question or doubt about it."
— Matthew Higgs, former director of exhibitions at London's Institute of Contemporary Arts

Critics have tried to define Judith's art, calling it "outsider art" or "brutalist." But her art stands on its own out of necessity. She told her story through wrapped objects and knotted fabric, rather than words and sentences.

In 2005, one evening after dinner, Judith passed away peacefully in her sister's arms. For the past 11 years, Joyce has continued to tell her story.

In addition to her work helping other artists with disabilities around the world, Joyce has joined exhibitions of Judith's work and written a book about their life together.

Many people credit Joyce with transforming her sister's life, but she disagrees. Judith, she says, was her guardian and caretaker, not the other way around.

Thomas F. Wilson played one of the most recognizable villains in film history, Biff Tannen, in the "Back to the Future" series. So, understandably, he gets recognized wherever he goes for the iconic role.

The attention must be nice, but it has to get exhausting answering the same questions day in and day out about the films. So Wilson created a card that he carries with him to hand out to people that answers all the questions he gets asked on a daily basis.

The COVID-19 pandemic has disproportionately affected diverse communities due largely in part to social factors such as inadequate access to housing, income, dietary options, education and employment — all of which have been shown to affect people's physical health.

Recognizing that inequity, Harlem-based chef JJ Johnson sought out to help his community maximize its health during the pandemic — one grain at a time.

Johnson manages FIELDTRIP, a health-focused restaurant that strives to bring people together through the celebration of rice, a grain found in cuisines of countless cultures.

"It was very important for me to show the world that places like Harlem want access to more health-conscious foods," Johnson said. "The people who live in Harlem should have the option to eat fresh, locally farmed and delicious food that other communities have access to."

Lack of education and access to those healthy food options is a primary driver of why 31% of adults in Harlem are struggling with obesity — the highest rate of any neighborhood in New York City and 7% higher than the average adult obesity rate across the five boroughs.

Obesity increases risk for heart disease or diabetes, which in turn leaves Harlem's residents — who are 76% Black or LatinX — at heightened risk for complications with COVID-19.

A U.S. Senate candidate asked people to prove her racist assertion wrong. And boy, did they ever.

Sometimes a politician says or does something so brazenly gross that you have to do a double take to make sure it really happened. Take, for instance, this tweet from Lauren Witzke, a GOP candidate for the U.S. Senate from Delaware. Witzke defeated the party's endorsed candidate to win the primary, has been photographed in a QAnon t-shirt, supports the conspiracy theory that 9/11 was a U.S. government inside operation, and has called herself a flat earther.

Witzke has also proposed a 10-year total halt on immigration to the U.S., which is absurd on its face, but makes sense when you see what she believes about immigrants. In a tweet this week, Witzke wrote, "Most third-world migrants can not assimilate into civil societies. Prove me wrong."

Most third-world migrants can not assimilate into civil societies. Prove me wrong.
— Lauren Witzke (@Lauren Witzke)1602085382.0

First, let's talk about how "civil societies" and developing nations are not different things, and to imply that they are is racist, xenophobic, and wrong. Not to mention, it has never been a thing to refer people using terms like "third-world." That's a somewhat outdated term for developing nations, and it was never an adjective to describe people from those nations even when it was in use.

Next, let's see how Twitter thwapped Lauren Witzke straight into the 21st century by proving her wrong in the most delicious way. Not only did people share how they or their relatives and friends have successfully "assimilated," but many showed that they went way, way beyond that.

There are two conflicting viewpoints when it comes to addressing culture from that past that contains offensive elements that would never be acceptable today.

Some believe that old films, TV shows, music or books with out-of-date, offensive elements should be hidden from public view. While others think they should be used as valuable tools that help us learn from the past.

Someone placed funny, fake historic plaques on park benches around this Canadian city