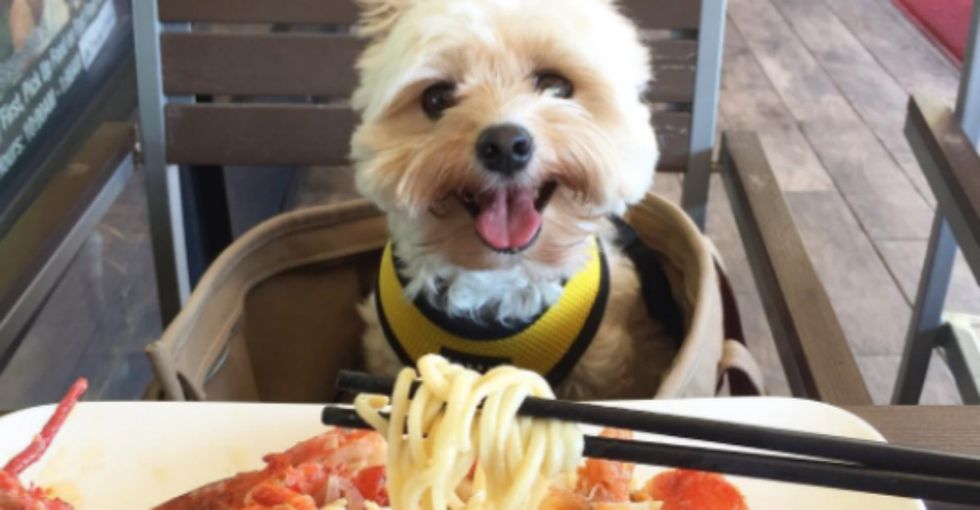 Popeye the pup is a furry 4-year-old living it up in Southern California.

All photos courtesy of ​Popeye the Foodie Dog/Instagram.

But things weren't always so bright and sunny for the little guy.

About three years ago, his human, Ivy Diep, spotted him wandering the streets alone — dirty, heavily matted, and skinny.

"He had just crossed a major street and I thought, 'Oh, I hope that pup's going to be okay,'" Diep wrote in an email. "I had returned home that day and was about to head out again when I saw him again across the street from my house."

This is what Popeye looked like when Diep first found him on the street.

Concerned for his safety, Diep called out to him.

"He actually came to me!" she said. "Some dogs would bolt, but he didn't."

Diep loved Popeye but was hesitant to welcome him to the family at first. After all, she already had a house full of pets; she wasn't looking for any more canine additions. But no one else would take him.

She decided it must be meant to be. And boy, was it a great decision.

Although Popeye can sometimes be "a loud barky monster to new people and dogs," Diep said, now he fits right in.

"It wasn't long before he made himself at home at my place with my other dogs," Diep told Bored Panda. "And of course, my husband and I fell in love [with him, too]."

Popeye, like many dogs, loved being out and about. So Diep began bringing him on lunch dates and documenting the fun.

Their foodie adventures are as adorable as they are delicious.

Today, Popeye the Foodie Dog has over 131,000 followers on Instagram.

It's difficult to know what fans enjoy most — the mouth-watering food they get to scroll through, or Popeye's delightful little expressions.

"He has a lot of personality in his face," Diep said. "It's adorable to capture."

Don't worry, though — Popeye doesn't eat any of the human food that could harm him. The photos are mostly just for show.

"He'll get nibbles of anything that's safe," Diep explained. "I also carry a bag of treats for him, in case there's nothing he can have."

Mostly, though, Popeye just loves getting out there and seeing the world.

Sometimes he'll dress for the occasion, too. Like on St. Patrick's Day.

When Popeye's itching to get a taste of some French crepes, he's got to look the part.

And when he's enjoying a plate of BBQ? Cowboy hats are mandatory.

Diep is so glad she saved Popeye from the streets that day three years ago. Who knows what would have happened to him otherwise?

Many dogs aren't so lucky. It's difficult to tally the exact numbers, but the ASPCA estimates roughly 7.6 million cats and dogs stay in shelters across the U.S. each year. That figure, of course, doesn't include the millions more that are living on the street, like Popeye had been.

Tragically, when they're not adopted or returned to their humans, many of these animals are euthanized. That's why helping rescue dogs (and cats) find forever homes is so crucial.

Diep certainly recommends welcoming a rescue if it's right for you and your family, but with one big disclaimer: You must practice patience.

"Although Popeye was pretty easy as he's a really mellow, chill dog," she noted. "He was not house-trained and had a lot of fears — loud noise or a stick of any kind."

"He used to bolt anytime he saw us lift a broom or duster, even chopsticks.  It made me wonder if he was possibly traumatized in his past," she said.

"I don't know what he went through before us, but I'm just glad that he's learned to love and trust that we won't hurt him."

As is the case with welcoming any new dog to the home, there have been a few bumps in the road. But the pros of accepting Popeye far outweigh the cons.

"All the work in house-training him and the property damage he caused was all worth it," Diep said.

There are probably plenty of cats and dogs in your own area that could use a warm bed and four walls to call home.

Help dogs like Popeye find forever homes in your own community today.