If you don't know what the 'pink tax' is, this Burger King ad is a great place to start.

These women really, really weren't having it. 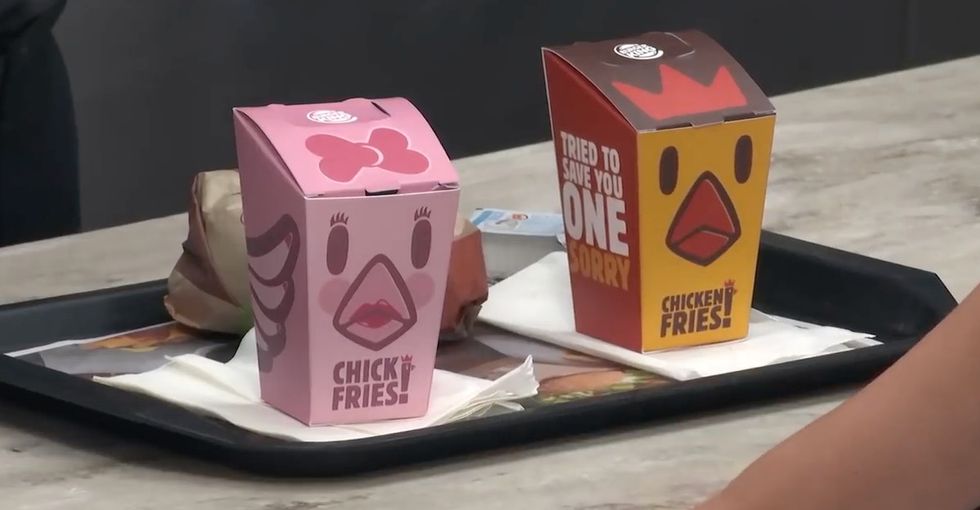 A man and woman walk into a Burger King. They order the same exact thing but pay two very different prices.

That's the premise of Burger King's new "Chick Tax" video. The hidden-camera video shows women's reactions when they're told that it'll cost them $3.09 for an order of Chicken Fries versus the $1.69 the man with them just paid.

Needless to say, many of the women in the video aren't happy about having to pay an extra $1.40 for the same product in pink packaging labeled "Chick Fries" — and rightly so. Ridiculous, right? Yeah, Burger King thought so too.

"Chick Fries" aren't a thing, but there are a bunch of situations just like that everywhere you go. People call it the "pink tax."

The next time you're at the pharmacy, compare the cost of men's and women's razors. Maybe there's a slight difference? OK, now go into a store and check out the cost of a boy's T-shirt compared with a girl's — same material, same brand, and so on. The one aimed at girls might be a little more expensive. The same goes for any number of items.

In 2015, New York City's Department of Consumer Affairs compared 800 different products and their costs. What they found was that when comparing two obviously gendered versions of products (for example, a pink and blue disposable razor), women paid an average of 7% more than men. They looked at everything from toys to clothing to toiletries to senior home health care products. The "pink tax" was real, and it spanned the marketplace.

A view of the gift bag during the Ax the Pink Tax Panel in April 2018 in New York. Photo by Monica Schipper/Getty Images for Refinery29.

Both Cards Against Humanity (who donated the extra cash made from people who actually bought the pink version of the game) and Burger King are just trying to make a point about how ridiculous it is for brands to present products as "for her" when the only difference is a change in color and maybe a cute and catchy slogan about empowerment or whatever. But this is actually what companies do. Why do we put up with it?

In some cases, like razors, there's really no reason women shouldn't feel comfortable stocking up on the men's version of things when they're cheaper. In others, like clothes, that may need to be tailored differently based on body shape, it's a little harder.

Some members of Congress are trying to pass a pink tax repeal.

In April, Rep. Jackie Speier (D-California) and 27 of her colleagues introduced the Pink Tax Repeal Act, a bill that would prevent stores from pricing services or products from the same manufacturer differently based solely on the gender of the people being marketed to. While Speier was able to pick up three additional co-sponsors, the bill has more or less languished in committee since its introduction.

That's where you come in. Burger King's ad ends by asking viewers to call their members of Congress to urge action on the Pink Tax Repeal Act. Getting this bill through Congress and signed into law is an extreme long shot. Even so, this is an issue worth supporting. Charging people different prices based on their gender isn't OK when it's an order of Chicken Fries, and it's not OK when it's anything else either. Call your members of Congress today.