Attacks on Asian-Americans need to stop. Here's what we can all do to help. 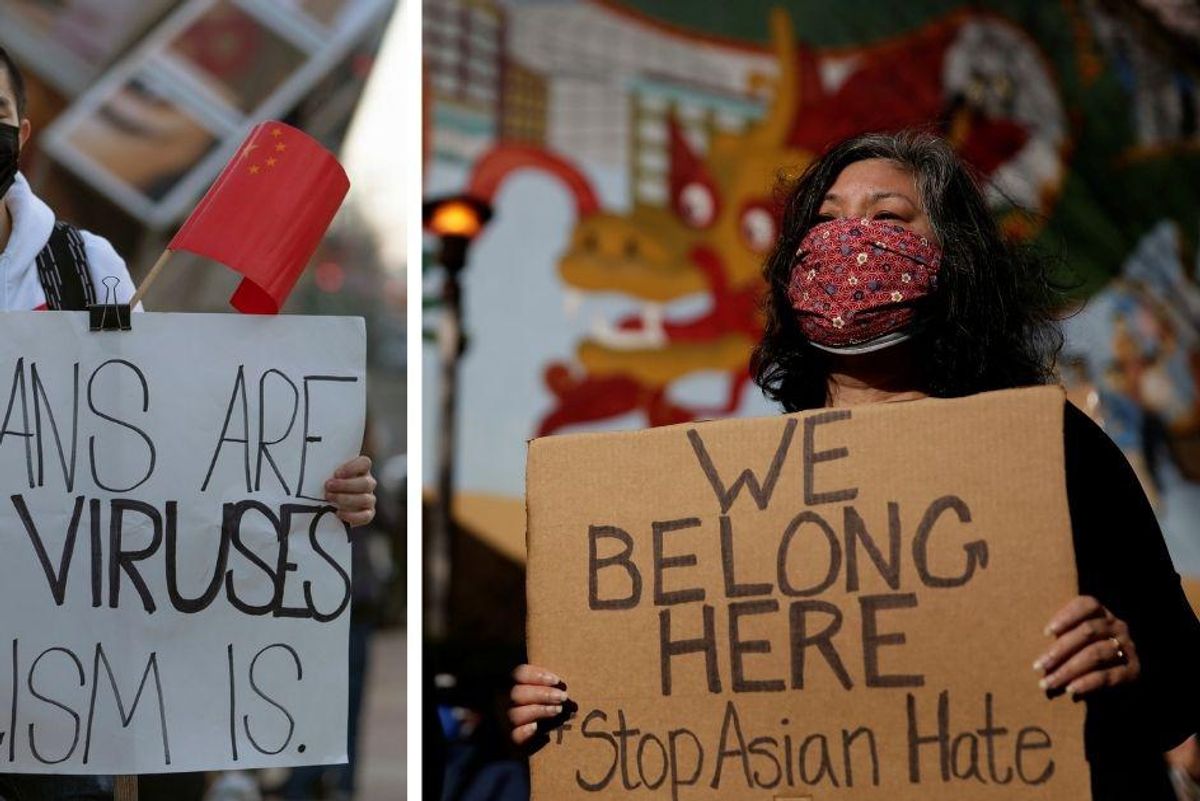 Attacks on Asian-Americans and Pacific-Islanders (AAPI) have been highlighted by advocacy groups since early in the pandemic, but it took nearly a year for the incidents to start receiving the broad media coverage they deserve. Despite stunning statistics in the rise in anti-Asian sentiment, discrimination, and violence, it's taken vicious attacks on Asian-American elders and a horrific shooting spree of Asian-American women to get the nation's full attention.

A killing spree at three spas in the Atlanta area left eight people dead, including six women of Asian descent, last night. Details are still emerging, but we know that the shooter was a white man who loved guns and who purposely and premeditatedly targeted these businesses, driving dozens of miles between shootings at three different spas. We know that Asian-Americans make up around 3% of the population of Georgia and 75% of the victims of this shooting. We know that the killer blamed a sex addiction and targeted massage parlors (which are largely staffed by Asian women) because they represented "a temptation."

And we know that these shootings add another frightening layer to skyrocketing attacks on people of Asian descent in the U.S.

In February, the death of an 84-year-old Thai man who was violently tackled in his driveway shone a spotlight on the issue in the Bay Area, where a spate of attacks has erupted in recent months. A video of a 91-year-old man being violently shoved to the ground in Oakland prompted actors Daniel Dae Kim and Daniel Wu to offer a reward of $25,000 to anyone who could help identify the attacker. (It turned out police already had him in custody as a suspect for other similar attacks.) A 64-year-old Vietnamese grandmother was assaulted and robbed of $1000 while walking to her car in San Jose as well, and Chinatown businesses have been hit by an alarming increase in robberies.

Amanda Nguyễn, CEO and founder of the civil rights organization Rise, shared a plea on Instagram for people to raise awareness about the increase in anti-AAPI violence last month.

Other kinds of attacks have also made headlines in recent weeks. Mike Nguyen, who owns an Asian restaurant in San Antonio, went on CNN last week to speak out against Texas governor Greg Abbott lifting the state's mask mandate. Four days later, the front of his restaurant was graffitied with the phrases like "No Mask," "Kung Flu," "Commie," "Hope U Die" and "Ramen Noodle Flu." Nguyen, whose background is Vietnamese and French, was also greeted with the words "Go Back 2 China" spray-painted on a bench outside the restaurant.

According to NYPD data reported in the Queens Chronicle in September, anti-Asian hate crimes had already increased 1900% from 2019 to 2020 before fall even hit. (In the same time period, anti-Jewish and anti-Black hate crimes in New York had decreased, so it's not a matter of overall hate crimes increasing.) The Anti-Defamation League reported in June that there had been a "significant" number of reports of harassment and attacks against people in the Asian-American and Pacific Islander community, and the United Nations stated in October that hate crimes against Asian-Americans were happening at "alarming levels," citing 1800 incidents in just two months, from March to May of 2020.

Throughout the pandemic, there has been an alarming rise in anti-Asian sentiment resulting in violent hate crimes b… https://t.co/DCqL6O5suQ
— Alex Shibutani (@Alex Shibutani)1612718045.0

Reading people's individual stories, it's clear that the vast majority of incidents include references to the COVID-19 pandemic. People blame Asian-Americans for the coronavirus—a xenophobic idea that has been inflamed by politicians who insist on calling it the "China virus" or "Kung flu." (That's not merely conjecture; Manjusha Kulkarni, executive director of the Asian Pacific Policy and Planning Council said that their data showed that the increase in racist and xenophobic attacks was "catalyzed by rhetoric from the president and other government leadership.")

The AAPI community needs every American of goodwill to step up, speak up, and act to put an end to these attacks. Here are some things everyone can do to help:

- Personally: If you see or hear someone using anti-AAPI language, say something. Don't let phrases like "China virus" or "Kung Flu" or comments blaming Asian people for the pandemic go unchallenged. Commit to not being a passive bystander, but rather an active disrupter, of harassment when you see it. If you witness an incident, report it at stopaapihate.org.

- Socially: Get to know AAPI members of your community and listen to their concerns. Raise awareness by following and sharing the hashtag #StopAAPIHate on social media. Speak out about Anti-Asian hate crimes and share positive stories about people from the AAPI community as well.

- Educationally: Seek out information about the kinds of discrimination people in the AAPI community face. Click on the links from this article or simply Google terms like "Anti-Asian" and "AAPI hate crimes." If you're a parent, teach your kids how to recognize when their peers are engaging in anti-Asian jokes or behavior and how to be an ally.

- Organizationally: Make sure your workplace and organizations you're a part of are committed to protecting AAPI members of your community from harassment. This PDF from the Asian Pacific American Labor Alliance put together has specific action items employers and organizations can use as a guide.

- Monetarily: Buy from AAPI-owned businesses, many of which have suffered during the pandemic both from economic loss and discriminatory attacks. Support AAPI advocacy and anti-discrimination organizations such as iHollaback! (an anti-harassment organization that provides free bystander intervention training) or the National Coalition for Asian Pacific American Community Development (a coalition of more than 100 organizations advocating for AAPI communities). Keep an eye out for crowdfunding efforts for individual victims of hate crimes.

You can also check out more anti-Asian violence resources here.

Let's all commit to creating a society in which everyone is uplifted and where all people can feel safe no matter who we are or where we come from.