Whoever is naming the cats at this Austin shelter probably needs to be drug tested. 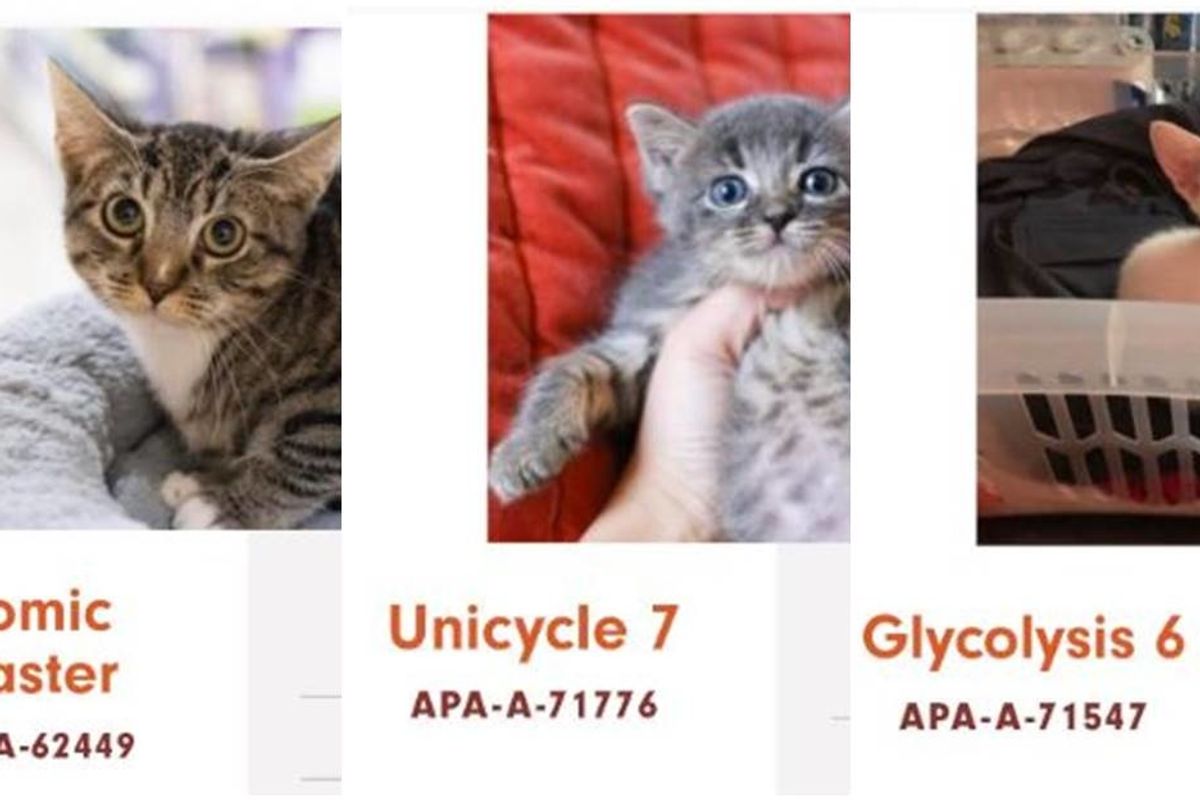 According to Austin Pets Alive!'s website, they've done a fantastic job at saving the lives of countless dogs and cats in the area. When the shelter was first opened in 1997, Austin had a kill rate of 87%. Since, the city now has a save rate of 97%!

While their dedication to helping animals is unquestionable, Twitter user Nic went viral after tweeting about the shelter's questionable naming system.

who is in charge of naming the poor kittens at austin pets alive pic.twitter.com/8PPUNdGm8S
— nic (@urregomyeggo) May 24, 2019

After that tweet, she shared a photo of the adorable cat that she got at Austin Pets Alive!

wow this blew up like an atomic toaster. nothing to promote here other than adopt > shop! I got my own little crackhead from APA and they're an amazing no-kill shelter that could always use volunteers/donations pic.twitter.com/VuKcjxmwB0
— nic (@urregomyeggo) May 26, 2019

People replied to her tweet with some of their favorite bizarre names.

Well actually, I fostered iPad. It was a liter of 7 cats- iPad, iPod, iPod mini, iPhone, iCloud, iMac, iTunes. It's pretty adorable. And just look at those faces. pic.twitter.com/I4KMqbjrzj
— Sara Goldstein (@Sara_Goldstein) May 27, 2019

A Twitter user named Hannah has a good theory on why the cats have such eccentric names.

they purposely give the pets weird names for foster parents. you're less likely to get attached to something if its name is something like trashcan than you are with something named whiskers.
— Hannah Barnes (@Hannah_Barnes04) May 26, 2019

Yeah this is weird.

Trashcan and I would be WAY tighter than me and Whiskers.
— Shadow Trick (@Just_Eleanora) May 26, 2019

My friend named her cat "bookshelf" and I think it's perfect
— Andee (@SrirachaCupcake) May 26, 2019

One of Austin Pets Alive!'s employees chimed in with the latest kitty names. Fardtus? Sounds like a villain in a kids' cartoon.


I am one of those people that names the kittens!!! I work at the neonatal nursery! Right now we have kittens named Moochie Moo, Fardtus, and Xoo 😹. They all are currently looking for a foster home!!
— Cristina (@cmonita) May 27, 2019

Austin Pets Alive! names thousands of kittens and cats a year. If we went with traditional names each time, imagine how many callicos named Callie we'd have, or black cats named Midnight? It's much easier to find Atomic Toaster in our system versus searching through 20 different cats all with the same name. We believe the more unique the name, the better, because it ensures you're talking about the right cat.

As far as the numbers behind the name … no, we aren't talking about the 4th version of the iPad. It's the way we keep track of how many litters of neonatal kittens we receive a year!

The site also dispelled the myth that they give the cats strange names so their caretakers don't get attached.

Names don't stand in the way between feeling a connection towards an animal. We name every cat that comes through our doors, whether that be a neonatal kitten or a barn cat – even our own feral cats get a unique name based off of their personalities. It's our way of honoring them as living beings. Naming things, no matter how strange the name, is a bonding experience.

Here are just some of the awesome names and cats we found on the Austin Pets Alive! Site.