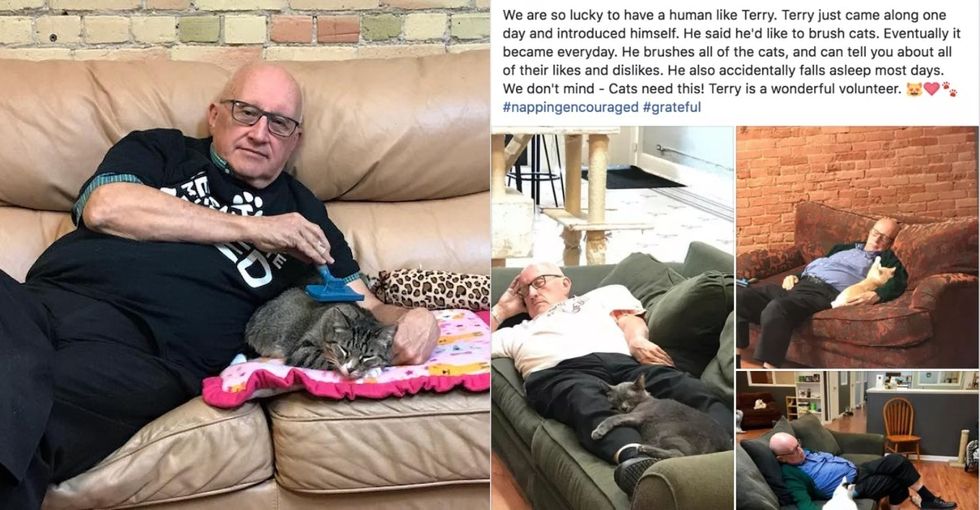 They say that not all heroes wear capes. But some do come equipped with their own magic cat brush.

Internet, Meet Terry, a retired Spanish teacher from Wisconsin whose favorite hobby (and pro-social volunteer activity) has turned him into a celebrity and the unofficial patron saint of all cats who need a cuddle, a brush, and a nap with a friendly human.

A few months ago, Terry appeared (as if by magic!) at The Safe Haven Pet Sanctuary in Green Bay with one request: He wanted to stop by and brush the cats on a regular basis. Soon, Terry was showing up every day and spending up to three hours at a time with the cats.

And all that brushing can get kind of tiring, so Terry would sometimes have to take a nap (understandable). But then other people at the sanctuary started taking photos of Terry napping with his feline buddies. And when those photos were posted on Facebook, well...

And, in the immortal words of DJ Khaled, "another one":

You can guess what happened from there. After Terry's pictures hit social media, they were viewed hundreds and thousands, and, by now, probably millions of times. A fundraiser for the shelter in Terry's name has already hit more than $16,000.

And there's a great reason why the internet's going buck wild for Terry and his animal pals.

In a phone call with Upworthy, Elizabeth Feldhausen, the founder and president of the shelter explained that Safe Haven takes in cats who might not have had a home anywhere else.

"We rescue cats with disabilities and special needs — anywhere from anxiety to paralysis to diabetes to thyroid problems," she said. "Anything that could put them at risk at another shelter."

Sometimes, Feldhausen told us, the sanctuary takes on cases where an owner might have felt like they had no choice but to put a cat down because their medical care costs too much.

If the pictures above look like they might have been taken in someone's home, there's a reason for that, too. The shelter's a therapeutic and cage-free environment. The cats have bedrooms and a living room. And they wander about freely so that they can get used to being around people and feeling safe in their space.

"It helps them a lot to be socialized," Feldhausen said. "So we've set it up in a way as to be psychologically pleasing to these animals who have been through so much."

"I've always liked cats," Terry told me when I spoke to him. "And I didn't have cats as an adult. But when I retired I decided to do something fun and this place emerged. I had been volunteering at other shelters, but this place is special because no cages and the cats can feel taken care of in a friendly environment."

According to legend (Feldhausen), Terry brings his own brush to groom the cats. And it's just one more thing that makes them feel special.

"He says it's his magic brush," Feldhausen laughed. "That's why the cats love him so much. He's not just a grandpa to the cats. He's the grandpa to everyone at Safe Haven."

("I just bought the brush at a local department store, but it's a nice brush," Terry laughed.)

Terry just wants the cats to be happy. And you can help.

Terry was brushing cats when I called the shelter (natch), but he took a couple of minutes away from brushing his one special cat to send a message to anyone out there who's thinking of getting involved with cats who have special needs.

"It's well worth it, if you have the patience. It takes a very special type of person to work with a special needs cat."

Terry's lifestyle — he takes several months off a year to do research in Spain — doesn't allow him to adopt a cat right now, but that doesn't mean he's not making special connections. His favorite cat is a domestic short hair named Buckhorn who's recently lost his brother to FIP.

"He was so scared. He hid behind a counter for weeks and I didn't know he existed. Now he's come out and he's become my special friend and that's going to stay with me forever."

While not all of us can expect to go viral ("I just fell asleep!" Terry says) for doing good, all of us can do more. And that doesn't always mean a donation. If you've got extra time and the desire to give cats (and dogs and all other domesticated animals) the love they deserve, look up your local shelter and volunteer. Both you and the animals will be better for it.

As for Terry? Feldhausen says that the sanctuary's been overwhelmed with calls for volunteers. And while the facility's too small too accommodate everyone, there's no chance that anyone's going to take over for the shelter's number one grandpa.

Paige is a 6-year-old skateboarding wonder from Australia. A recent video of her dropping into a 12-foot bowl on her has gone viral, both for the feat itself and for the style with which she does it. Decked out in a pink party dress, a leopard-print helmet, and rainbow socks, she looks nothing like you'd expect a skater dropping into a 12-foot bowl to look. And yet, here she is, blowing people's minds all over the place.

For those who may not fully appreciate the impressiveness of this feat, here's some perspective. My adrenaline junkie brother, who has been skateboarding since childhood and who races down rugged mountain faces on a bike for fun, shared this video and commented, "If I dropped in to a bowl twice as deep as my age it would be my first and last time doing so...this fearless kid has a bright future!"

It's scarier than it looks, and it looks pretty darn scary.

Paige doesn't always dress like a princess when she skates, not that it matters. Her talent and skill with the board are what gets people's attention. (The rainbow socks are kind of her signature, however.)

Her Instagram feed is filled with photos and videos of her skateboarding and surfing, and the body coordination she's gained at such a young age is truly something.

Here she was at three years old:

And here she is at age four:

Paige clearly enjoys skating and has high ambitions in the skating world. "I want to go to the Olympics, and I want to be a pro skater," she told Power of Positivity when she was five. She already seems to be well on her way toward that goal.

How did she get so good? Well, Paige's mom gave her a skateboard when she wasn't even preschool age yet, and she loved it. Her mom got her lessons, and she's spent the past three years skating almost daily. She practices at local skate parks and competes in local competitions.

She also naturally has her fair share of spills, some of which you can see on her Instagram channel. Falling is part of the sport—you can't learn if you don't fall. Conquering the fear of falling is the key, and the thing that's hardest for most people to get over.

Perhaps Paige started too young to let fear override her desire to skate. Perhaps she's been taught to manage her fears, or maybe she's just naturally less afraid than other people. Or maybe there's something magical about the rainbow socks. Whatever it is, it's clear that this girl doesn't let fear get in the way of her doing what she wants to do. An admirable quality in anyone, but particularly striking to see in someone so young.

Way to go, Paige. Your perseverance and courage are inspiring, as is your unique fashion sense. Can't wait to see what you do next.