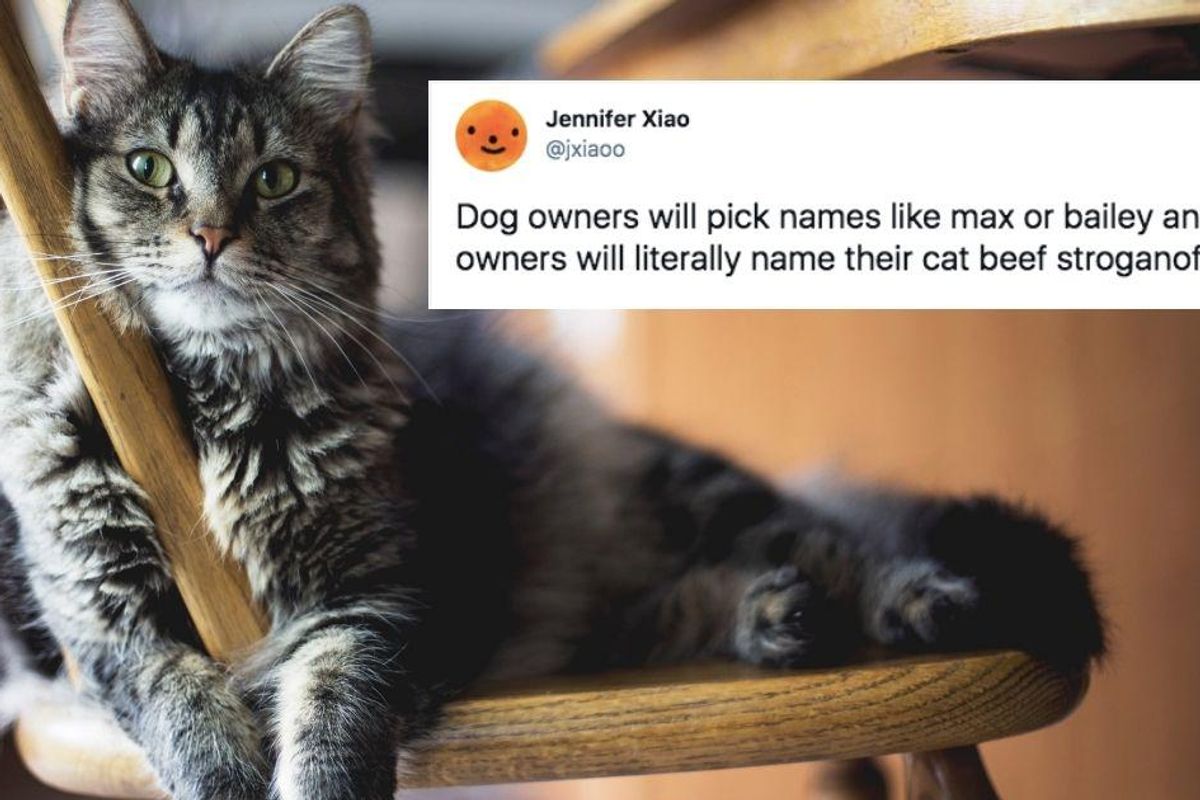 "The Naming of Cats is a difficult matter,

It isn't just one of your holiday games..."

When T.S. Eliot wrote "Old Possum's Book of Practical Cats" in 1939, he probably never imagined his poetry would be turned into a delightfully despised musical. And when unsuspecting show-goers witnessed the spectacle of CATS on stage for the first time, they likely had no idea how much of the largely non-existent plot would be about what, why, how cats are named.

Silly, perhaps, but the naming of cats truly is a difficult matter. Cats are bizarro screwballs of the highest order. They start off adorable little puffs purring fur, and evolve into beautiful animal specimens that emanate strength and grace on the one hand and hilarious quirks and personality on the other. How can you possibly choose a name that truly befits such a magnificently weird creature?

You can't. Which is why people end up naming their cats the silliest names they can think of.

On Twitter, Jennifer Xiao posted a simple observation that got a hilarious ball rolling: "Dog owners will pick names like max or bailey and cat owners will literally name their cat beef stroganoff."

Cue the deluge of pretty kitties with shameless names.

Lots of pasta cats out there. How cute is "Wednesday Fettucine"? Come on now.

No shortage of fruit and fruit-flavored names as well.

Green Bean Casserole is a cutie. But the promotion and demotion of Beans is hilarious. "Grand Marshall Beans!"

And yes, someone actually did name their cat Beef Stroganoff. "Strogi" for short.

But food names are just the beginning. It gets so much better.

Hallway. HALL.WAY. People are so magical.

Missy sounds normal enough, until you find out it's short for Missile Launcher.

And then there's Beanbag. Is her middle name Chair? Hope so.

Stinky and Pot Roast are cute. But Astral Projection (to the Nearest Target) might just take the cake.

One person pointed out that the reason people feel they can name their cats any old random thing is because they never have to call their cats' names in public. Yelling out "BEEF STROGANOFF!" or "BONG WATER!" or "PARKING LOT!" might be a little...awkward.

But of course, unique names are not the domain of cats alone. Check out this person who named their snake Minecraft Creative Mode and who once had a dog whose full name was Lego Star Wars: The Complete Saga (2007). (Lego for short.)

Going back to T.S. Eliot, he wrote that every cat has three different names—one everyday name that the family uses, one name that's peculiar and unique even among other cats, and a secret name that only the cat knows and enjoys pondering on occasion:

Perhaps that's why we give cats such silly, goofy, laughable names. They have their own cosmic, mysterious name we're never going to know, so why the heck not name them Microsoft Windows or Spam Sandwich or Driveway? They're just going to ignore us when we say it anyway.