A lot of people are afraid of adopting black cats. Here are 5 adorable ones that you could get.

These adorable pictures will make you want to adopt a black cat ... right meow. 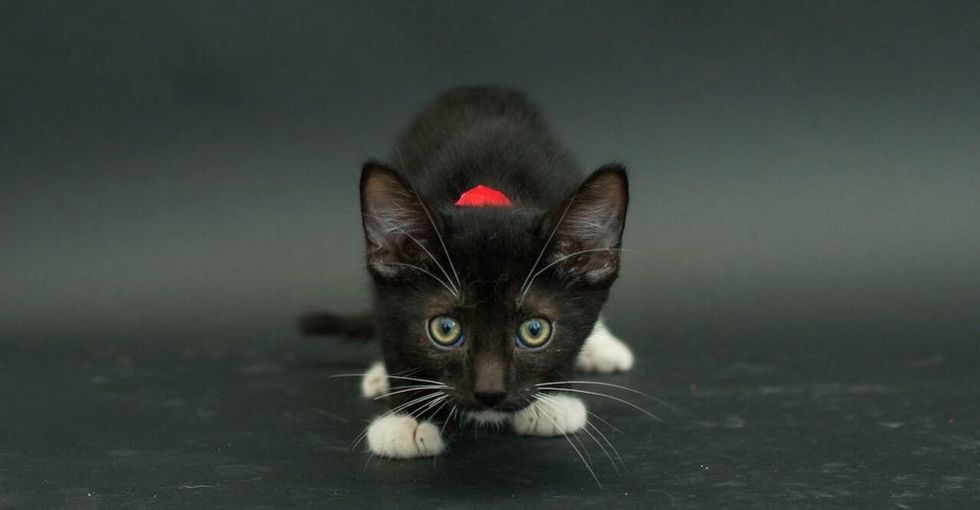 The Black Cat Project started with a kitten named Imogen.

Casey Christopher adopted Imogen from the West Los Angeles animal shelter last December. She fell so in love that she decided to volunteer regularly at the shelter, too.

Then she noticed something sad: Black cats weren't getting adopted as frequently as other cats. There's actual research about this. 13% of Americans think black cats are bad luck and 26% said color matters when deciding which cat to adopt.

So since she's also a photographer, Casey started taking photos of these adorable black balls of kitten fluff.

"With this photo series, I tried to showcase their personalities to counter the belief that black cats are bad luck," she said.

“There are almost always a lot of black cats and kittens available at the West LA animal shelter, and with Halloween coming up, I wanted to do something to promote them," Casey told Upworthy.

"Black cats and kittens tend to take longer to be adopted and it's very sad to see new cats come and go while the black cats are still waiting for forever homes."

Casey's photos, like the cats themselves, definitely stand out.

Take, for example, this photo of Eloise.

Casey says that Eloise is one of her favorite kittens at the LA shelter.

"She is such a cuddle bug and is very friendly," Casey gushes. "I got to name her and she's gorgeous and will be the perfect lap cat for someone."

Or this snapshot of Onyx, another beautiful black cat from the West LA animal shelter.

Casey says that of the 329 cats in city animal shelters in LA, 101 are black (she counted). This can happen for many reasons, one of which is the myth that black cats are bad luck.

Casey also launched this project in hopes of getting other people involved with shelter work.

"I want people to know that they should try to volunteer at their local animal shelter. It's really fun and rewarding and it feels good when you help get a cat adopted," Casey told Upworthy.

Plus, volunteering means you'll have the chance to play with cats like Frank...

... or you can hang out with Marissa.

At some shelters, you can even volunteer to foster young kitties who typically can't be adopted officially until they're eight weeks old.

Thank you, Casey, for showing the world that black cats are feisty, sweet, affectionate, and ready for their forever homes!