This offensive photo sparked a whole lot of love for the boy who deserved better.

'Dude where the hell did you get a black kid??' 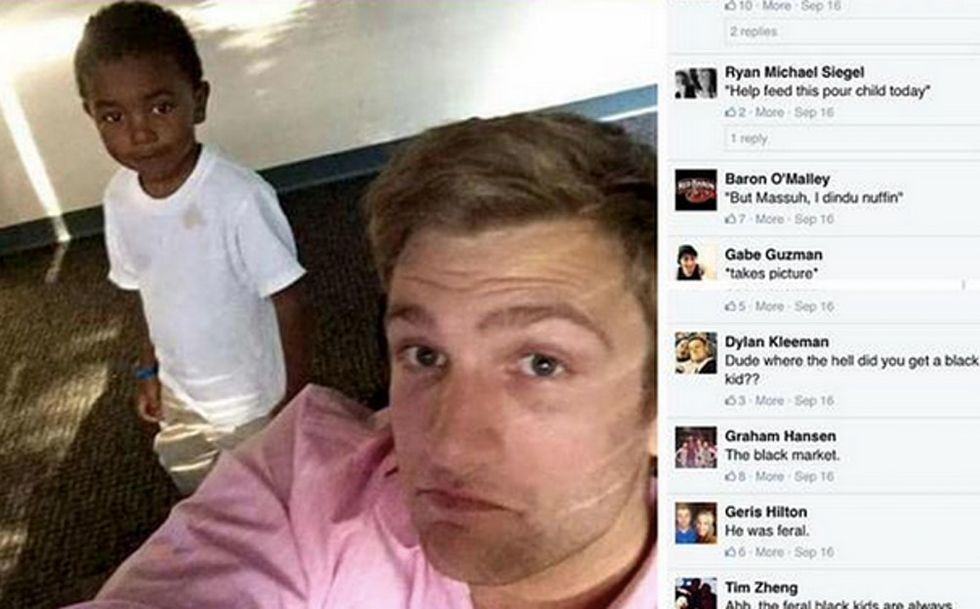 This article originally appeared on 10.06.15

Gerod Roth posted a photo of himself with a coworker's child last month.

And while it might not be immediately obvious why this was such a mistake, well ... let me tell you.

The initial photo, screencapped and tweeted above by Twitter user Dr. X, is seemingly adorable. But the comments and Roth's intent soon turned rather ugly.

Roth had snapped the pic of his coworker's 3-year-old son, Cayden, without his coworker's permission (already an incredibly uncool thing to do) and proceeded to use it as his profile picture. After it was posted online, his Facebook friends filled the photo's comment section with hurtful, racist "jokes":

"I didn't know you were a slave owner."

"Dude where the hell did you get a black kid??"

"But Massuh, I dindu nuffin."

Roth replied in the thread, "He was feral."

Yep. Real comments from real people ... aimed at a 3-year-old. Because of his skin color.

Of course, this being on the Internet and all, Cayden's mom quickly learned about the awful things being said about her child.

The funny thing about the Internet is, things get around. And before long, Cayden's mom, Sydney Shelton, heard about what this coworker had done at her child's expense.

"He is a well-loved, fun-loving, hyper-active and typical three-year-old," Shelton told Fox 5 News, adding there was nothing funny about that post.

Roth told the outlet he was disappointed in his friends' reactions to the photo and insisted that his own comment had only been "interpreted as racist," even though he hadn't meant it that way.

“People post things in a [joking] manner and it gets taken a completely different way," Shelton acknowledged. "But I don't believe any of these people were joking."

Instead of firing back at Roth with a few choice words, Shelton responded by letting the world see the real Cayden.

She posted several photos of her smiley, adorable son to Facebook, accompanied with the hashtag #HisNameIsCayden.

The Internet caught wind of #HisNameIsCayden. And unlike Roth's friends on Facebook, there were some really fabulous responses.

Some pointed to how the Internet can sometimes be a pretty amazing place...

Others gave a shoutout to Cayden's courageous mom...

Some noted how Cayden's story can serve as a refresher in online empathy...

Brands used the event to demand more from us...

And Cayden's grandma joined in, too, to celebrate her beautiful little grandson...

Britt Turner, a woman from Phoenix, was so inspired by Cayden's story that she decided to launch a GoFundMe to raise money for Cayden's college fund.

"Instead of continuing to shed light on all of the dark aspects of this horrible act, I would like to shed a lot of light onto the good things," Turner wrote on the fundraising page. "This young man has a full life ahead of him. I wanted to create this for Cayden, simply for that reason alone."

In the aftermath of the comments on the initial photo revealing Roth's penchant for racist humor, Roth has since lost his job.

Michael Da Graca Pinto, president of Polaris Marketing Group, where Roth had been employed, shared a statement on the company's Facebook page about the incident. He, too, was not happy about what had happened and assured followers that Roth had been fired on Sept. 29 (although he claimed it was due to unrelated issues at work):

"It breaks my heart that Sydney and her adorable son Cayden were subjected to such hateful, ignorant and despicable behavior. Cayden visits my office almost every afternoon after daycare, he's sat at my dinner table and I consider him a part of the PMG family. The atrocious lies, slander and racism he and his mother have been forced to endure are wholly intolerable. Myself and the entire PMG family in no way condones this kind of behavior and would never willingly associate with anyone who does."

Sometimes the Internet can be a truly awful place...

This article has been updated.

Through a historic storm and a global pandemic, this nurse embraces the true meaning of “Iowa nice”

From the time she was a little girl, Abby Recker loved helping people. Her parents kept her stocked up with first-aid supplies so she could spend hours playing with her dolls, making up stories of ballet injuries and carefully wrapping “broken” arms and legs.

Recker fondly describes her hometown of Cedar Rapids, Iowa, as a simple place where people are kind to one another. There’s even a term for it—“Iowa nice”—describing an overall sense of agreeableness and emotional trust shown by people who are otherwise strangers.

Abby | Heroes Behind the Masks presented by CeraVe www.youtube.com

Driven by passion and the encouragement of her parents, Recker attended nursing school, graduating just one year before the unthinkable happened: a global pandemic. One year into her career as an emergency and labor and delivery nurse, everything she thought she knew about the medical field got turned upside down. That period of time was tough on everyone, and Nurse Recker was no exception.

We're dancing along too.

Art can be a powerful unifier. With just the right lyric, image or word, great art can soften those hard lines that divide us, helping us to remember the immense value of human connection and compassion.

This is certainly the case with “Pasoori,” a Pakistani pop song that has not only become an international hit, it’s managed to bring the long divided peoples of India and Pakistan together in the name of love. Or at least in the name of good music.
Keep Reading Show less
pasoori
Joy

A couple enjoying a glass of wine.

In the 1988 Disney classic “Who Framed Roger Rabbit,” the titular character is in an unlikely relationship with his voluptuous wife Jessica. Roger is a frantic, anxious rabbit with a penchant for mischief, while Jessica is a quintessential ’40s bombshell who stands about a foot and a half taller and isn’t “bad,” just “drawn that way.”

When private investigator Eddie Valiant asked Jessica what she sees in “that guy?” she replies, “He makes me laugh.”

This type of couple may seem like something we only see in the movies, but don’t underestimate the power of humor when it comes to attractiveness. A new study published in Evolutionary Psychology found that being humorous is the most effective way to flirt for both men and women.