One woman had a strange, eye-opening encounter in a Target bathroom. 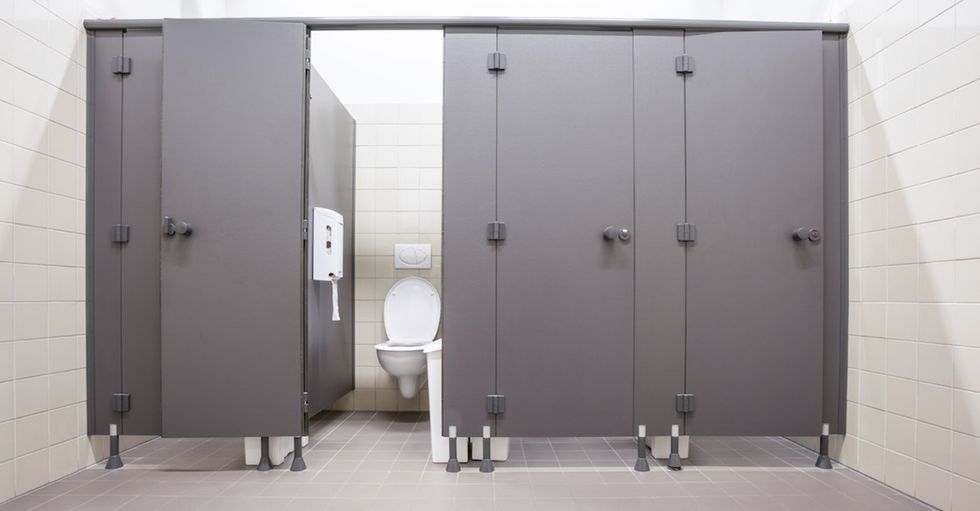 I went to Target with my daughter last week.

Since it was right after dinner and I'd had three iced teas with my Mexican food, I made a pit stop to the restroom first thing while she went on ahead to check out the swimsuits.

I was alone in the restroom. There were two large handicapped-accessible stalls, complete with baby-changing tables, and two regular stalls. I headed all the way down to the farthest single stall, up against the wall, and I sat down to take care of business.

That's when stuff got weird.

The outer door opened, and someone came into the restroom.

She walked past the three open stalls and stood directly in front of my door. Then she leaned over and placed her eye firmly up against the gap between the door and the frame and stared in at me.

I am not making this up. And let me tell you, it was awkward. Bizarre even. This wasn't a case of someone hoping all those occupied stalls aren't really occupied. Mine was the only stall that was occupied. She deliberately stopped and stared in at me. My startled eyes met hers, and she moved away into one of the larger stalls.

I got out of my stall as quickly as I could, and as I stood washing my hands, her voice called out.

"Sorry about that," she said. "But, you know, Target lets men and homosexuals use just any bathroom. I was making sure you were a woman."

I didn't say a word — because I really didn't know how to answer that.

Was she expecting a transgender woman to be lying in wait?

Hoping to ... what? Urinate behind a closed door? Was a pedophile or a rapist in a dress and a bad wig going to crawl under the stall walls while she sat, even though this is a public restroom in a very busy and popular store, when anyone — including employees with walkie-talkies — could walk in at any time and catch them? And don't even get me started about the homosexuals. I guess she's just worried they'll leave homosexual germs around or something.

I walked out, utterly gobsmacked, and it wasn't until I caught up with my daughter and told her the whole ridiculous story that I realized the complete and utter irony of it. This woman deliberately made me feel horribly uncomfortable just because she was uncomfortable with the extremely vague possibility of someone being different from expected behind a closed and locked stall door.

My daughter raised a brow and asked, "Did you tell her that your teenage daughter has a girlfriend?"

"She probably would have blinded me with hand sanitizer or something," I joked.

Anna just shrugged. "I feel sorry for her. I mean, with everything going on in the world, this is what makes her afraid? She doesn't even know how creepy she's being."

Come on ... the woman had to know she was being creepy. And it was really, really creepy. She just didn't care. Either she had an agenda to let me know she was taking a certain "moral" stance about a policy, or she really is afraid enough to do something rude and creepy even though she knows it's rude and creepy.

In the end, she was still shopping at Target because she needed or liked its products, and her fear didn't stop her from shopping.

And transgender people are quietly and without fanfare using the restroom they want to use and going on about their day, and probably most people don't even know they did it. And the pedophiles and rapists of the world will still find a way to hurt people, as they always have, policy or no policy.

And me? I'm still thinking about how ridiculous the whole thing was. My mind runs through all the snappy comebacks I should have used but didn't. I should have blown her a kiss. Or mooned her through the crack of her door.

Mostly, though, I think about my wise and beautiful daughter. The one with the girlfriend. She feels sorry for that woman. She chose compassion instead of offense or rudeness or insult.

But I still wish I'd blown a kiss.