These adorable pics of dogs at airports show why pups are the ultimate stress reliever. 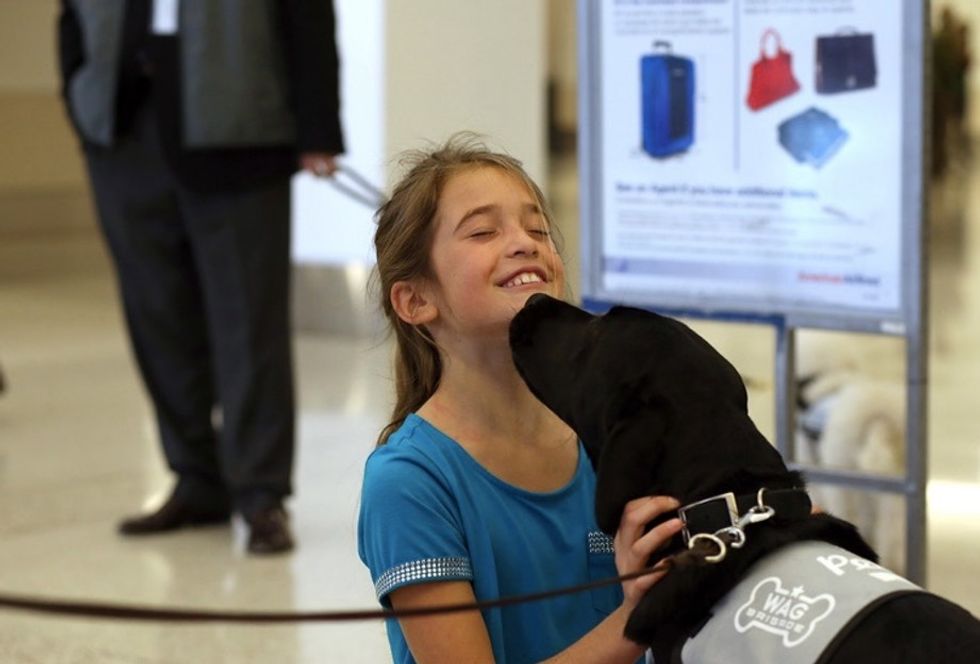 Even the most relaxing vacations usually start with you dragging a half-broken suitcase through a maze of terminals and expensive egg sandwiches while removing your shoes in public and wondering if you forgot your neck pillow. (You did.)

You also forgot your headphones. Have a nice flight! Photo by Sean Gallup/Getty Images.

Things get way worse if you miss your plane or have to sit through a nine-hour delay. There's only so much CNN a person can watch before they start wanting to punch Wolf Blitzer in the mouth (about 5 minutes by my estimate).

"The most common thing we notice at airports is that most passengers don’t smile at all," says Aakash Lonkar.

Lonkar, a director at Animal Angels Foundation, which specializes in animal-assisted therapy, says there's one thing that always changes people's moods, even at airports: dogs.

"Whenever they see a dog, a natural smile comes on their faces — they keep their bags aside and pet the dogs. The entire mood at the airport changes," Lonkar told The Better India.

This is a picture of a very not-stressed-out person. Photo by Justin Sullivan/Getty Images.

That's why Animal Angels, an non-governmental organization in India, has started bringing dogs to Mumbai Airport (with the airport's permission, of course).

When it comes to animal-assisted therapy, animals are "a catalyst to help the patients help themselves," explains the Animal Angels website. "For example, a child may not want to walk or reach after surgery because it is painful, but will happily take a dog for a walk or throw a ball, forgetting the pain for a little while and moving closer to going home."

While people waiting in line at the airport may not be recovering from surgery, the physical and emotional stress of traveling is no joke, and neither is the healing ability of some animal company. Being able to spend a few minutes with a friendly dog can do wonders to relieve that burden on passengers coming on or off their flights.

So far the group has brought three golden retrievers (named Pepe, Goldie, and Sunshine) to provide some much needed smiles at the busy Terminal T2.

It's a simple solution that has had hugely positive effects — Lonkar even said that some people cry when they see the dogs "because their stress is immediately released."

The stress-relieving abilities of dogs are no secret, and other airlines and airports have run similar programs.

Many studies have found that spending even a short amount of time with a pet can lower blood pressure and stress hormones like cortisol while raising oxytocin, which is linked to happiness and relaxation.

San Jose International Airport was one of the first to introduce the concept of therapy dogs to airports following the events of 9/11. Since then, airports in other cities like Los Angeles and Miami have followed suit.

In 2013, San Francisco International Airport welcomed what it calls the "wag brigade," a legion of adorable dogs whose job it is to be adorable dogs while people are at the airport.

The Dane County Regional Airport in Madison, Wisconsin, also has a therapy dog program — though if you ask me, it's a totally missed opportunity if none of their dogs are Great Danes:

The point is this — dogs are awesome and they make people happy, and it'd be great to see more programs like this at other places too.

Therapy dogs everywhere! C'mon, who's with me?