You can always count on Pop to say what he's thinking. 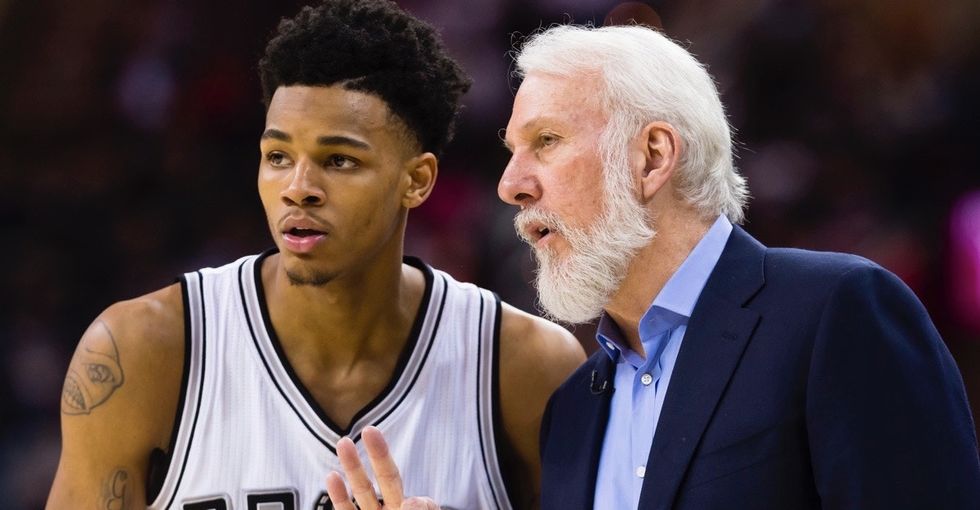 San Antonio Spurs head coach Gregg Popovich has a bit of a reputation for speaking his mind.

Back in May 2017, Popovich denounced the self-centered "game show" atmosphere brought on by Donald Trump's presidency.

In September, he went on a bit of a press conference rant about Trump's "childishness" and "gratuitous fear-mongering," eventually launching into a pretty epic speech about why it's important for him to use his platform to speak out on important issues like racism, even if they don't affect him personally. (He's white.)

With that in mind, it should come as no surprise that when Popovich was asked about the NBA's Black History Month celebrations, his answer would be worth a listen — even if it's a bit hard for white people to hear.

Asked by reporters why he felt it was important for the NBA to honor and promote Black History Month, he basically said that it's a no-brainer:

"I think it's pretty obvious. The league is made up of a lot of black guys. To honor [Black History Month] and understand it is pretty simplistic. How would you ignore that? But more importantly, we live in a racist country that hasn't figured it out yet. And it's always important to bring attention to it, even if it angers some people. The point is that you have to keep it in front of everybody's nose so that they understand it, that it still hasn't been taken care of, and we have a lot of work to do."

'We live in a racist country that hasn't figured it out yet' Gregg Popovich on why celebrating Black History Month… https://t.co/ZmQgDlslCL
— Sports Illustrated (@Sports Illustrated) 1518542777.0

It's easy to pretend that racism is a thing of the past, but that's simply not true.

It's pretty easy to get defensive when Popovich and many others say things like, "We live in a racist country that hasn't figured it out yet." After all, nobody wants to be called racist, and nobody wants to think that they play a role in perpetuating discrimination.

Considering what some on social media are saying in response to Popovich's latest comments, that defensive instinct comes through loud and clear.

"If this country is Racist [sic] then why are we celebrating Black History Month?" asked one Twitter user. "Pop is an idiot...why doesn't he resign and give his job to a black coach if he feels he's part of the problem?" tweeted another. "What are we celebrating? Why do we single out a month for blacks? Can we have white history month?" asked a third.

"We live in a racist country that hasn't figured it out yet."

It's indisputable that racism against black individuals and other people of color is real. There is ample data confirming the inequality and negative treatment aimed at black Americans.

For example, an October 2017 survey found that on average, prosecutors offered white defendants more lenient plea deals than their black counterparts. Experiments in so-called blind auditions and job applications, as well as a look at how doctors treat people of color compared to white people, demonstrate the existence of unconscious bias.

Popovich and the Spurs attend the White House to celebrate their 2014 NBA championship. Photo by Brendan Smialowski/AFP/Getty Images.

We are a racist country with a racist history. No, that doesn't necessarily make you a racist. It just means we have a lot of work left to do.

Just as Popovich said, if we really want to live in a more just world, we've got to keep this issue at the forefront of our minds.

Black History Month is a great opportunity to think about the many ways black Americans have shaped our country for the better in the face of crushing oppression. It's in acknowledging both the good and the bad that we can help build a a country that lives up to the lofty ideals lauded by many self-proclaimed "patriots."

Patriotism isn't about ignoring a country's faults, but about living each day to address them.