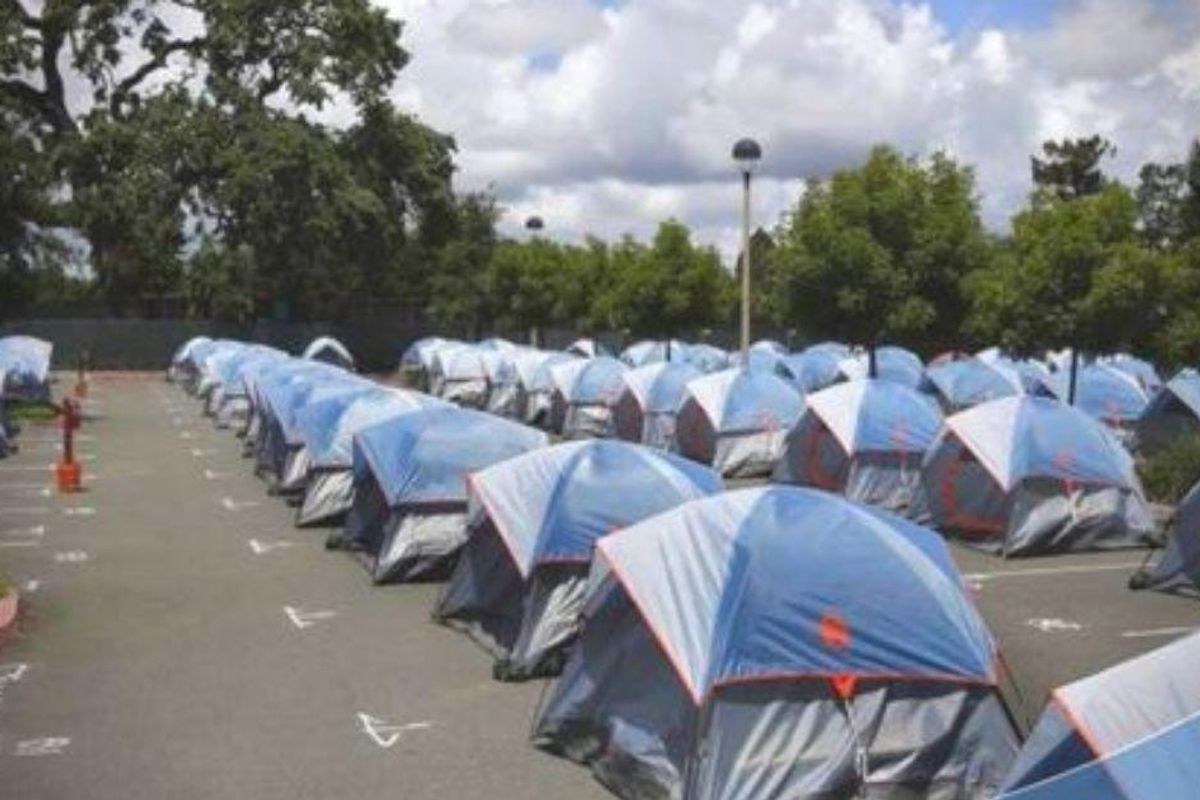 Last May, when the Northern California city of Santa Rosa announced they were temporarily putting up 70 socially distanced tents for people experiencing homelessness in the parking lot of the Finley Community Center—a popular park and aquatic complex where families regularly gather for recreation—residents of the upscale neighborhood revolted.

According to the Los Angeles Times, some of the commentary from the hundreds of people who complained about the proposed 'tent city' included:

"Will there be a list of everybody who decided to do this to us and our park, in case we want to vote them out?"

"This is a family neighborhood."

"How can we feel safe using our park?"

Residents' concerns included the potential for crime, drug use, trash, and disease—all things that the city would directly address in the project. But notable in the exchange between leaders and residents is that the officials weren't asking residents for permission to create the camp; they were simply informing them they were doing it.

City Council Member Tom Schwedhelm, who served as mayor at the time, told the Times that his mindset at the time was, "Go ahead and vote me out. You want to shout at me and get angry? Go ahead. It's important for government to listen, but the reality is these are our neighbors, so let's help them."

County Supervisor James Gore concurred. "We know we're pissing off a lot of people — they're rising up and saying, 'Hell, no!'" he said. "But we can't just keep saying no. That's been the failed housing policy of the last 30 to 40 years. Everybody wants a solution, but they don't want to see that solution in their neighborhoods."

So, the city proceeded. They addressed resident concerns by deploying police officers and security guards on-site for 24/7 patrols. They brought in portable toilets, hand-washing stations, and showers for people sheltering in the tents. They partnered with Catholic Charities to provide meals and to engage camp residents in beautification projects around the neighborhood. (In exchange for picking up trash, camp residents would receive gift cards to stores like Target or Starbucks.)

The residents pretty quickly came around. Families continued to use the park's facilities and began to bring donations such as food, clothing, and hand sanitizer for their neighbors staying in the encampment. A mobile clinic served the camp a few times a week, bringing basic health care and medications as well as screening for COVID-19.

While struggling to deal with unruly, make-shift encampments that inevitably pop up in and around the city, officials decided to try a proactive, purposeful approach in providing safe tent shelters and helpful services for people experiencing homelessness. And the results speak for themselves.

Some who made use of the site found that having access to medical care, sanitation, and meaningful service enabled them to start turning their life around. Some found jobs or got to a place where they could look for a job. Of the 208 people served at the site during its run, 12 were moved into permanent housing and nearly five dozen were placed in shelters while they await housing openings. Homelessness is a complex issue without simple fixes, but having safe shelter and basic services is sometimes enough to restore a person's sense of hope and dignity.

And the Finley Park residents who were originally outraged at the idea? They changed their tune as their fears proved unfounded. There was no violent behavior at the site; all of the police calls during the seven months were in response to additional people trying to utilize the camp when it was already at capacity.

When the city closed the site as originally promised in November, they asked residents for their feedback. Only three or four people called in with commentary, and they only had positive things to say.

Boyd Edwards, who plays pickleball at the Finley Community Center, told the Times, "I was amazed I never saw anything negative at all."

"I thought they were going to be noisy and have crap all over the place," added his friend Joseph Gernhardt. "Now, they can have it all year-round for all I care."

Plans are indeed in the works for similar sites to be established year-round in several neighborhoods, but this time with hardened housing structures. With homelessness an ongoing reality everywhere—but an especially visible issue in high-priced Northern California—governments must explore ways to help people get what they need. Santa Rosa officials took a risk by moving forward with a project that was unpopular with constituents at first, but which proved to be a positive way to address the issue.

As Sacramento mayor Darrell Steinberg said, according to the Times, "The problem with our approach is that every time we seek to build a project, there is a neighborhood controversy. Our own constituents say, 'Solve it, but please don't solve it here,' and we end up experiencing death by a thousand cuts."

Everyone wants something done about homelessness, but few people want it done in their own backyards. In a bold move, Santa Rosa officials simply rejected that reality and pressed onward despite complaints, in a gamble that pretty clearly paid off for everyone.

From Your Site Articles
Related Articles Around the Web
humanity