Parents separated from their kids in 2018 finally reunited on judge’s orders. It's 18 months too late. 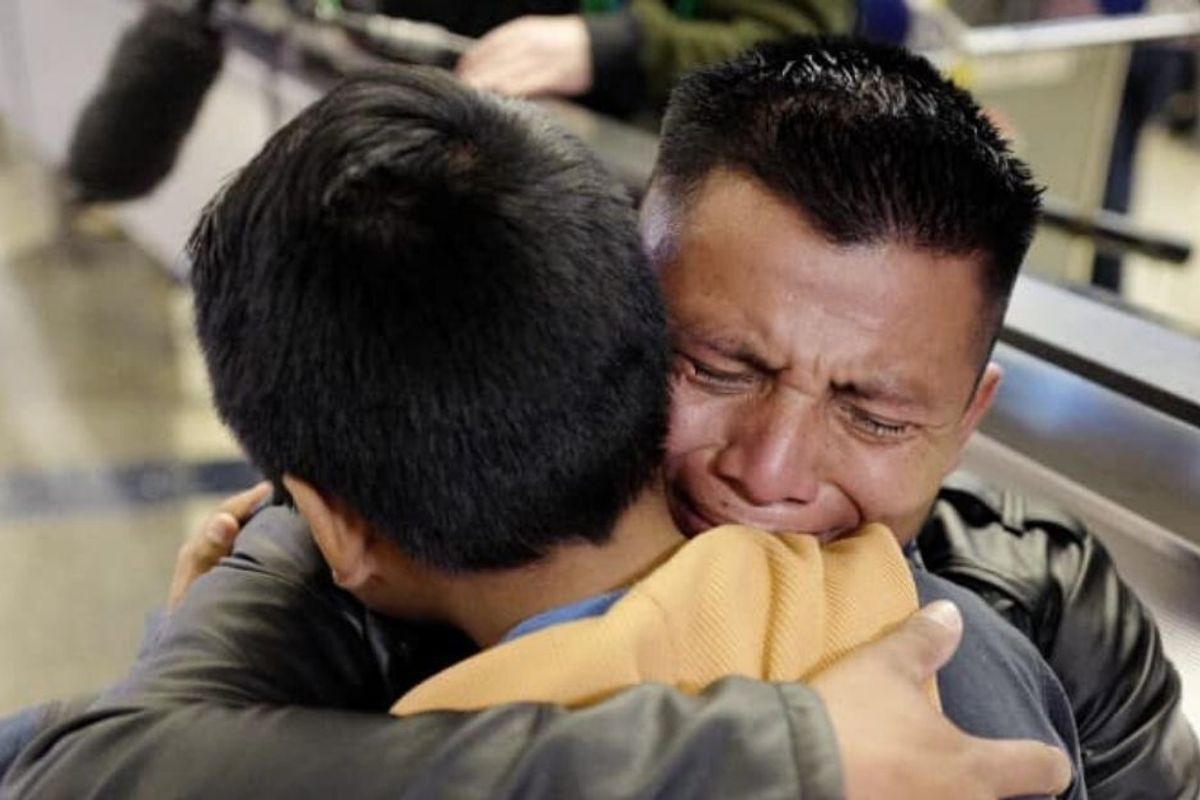 David Xol hadn't been able to hug his son Byron in a year and a half. When they were finally reunited last week in Los Angeles, on orders from a federal judge, Xol dropped to his knees and tearfully held his son for three minutes straight. Byron, now 9 years old, beamed.

The father and son had arrived together on U.S. soil in 2018 and Xol. Charged with illegal entry, Xol signed a document that border agents told him would allow him and Byron to be deported together. But then they took Byron away anyway and deported Xol to Guatemala alone.

Byron, age 7 at the time, was held in government facilities for 11 months, until the family's lawyer convinced a federal court to force the U.S. to let Byron go live with a foster family in Texas. Holly and Matthew Sewell took him in last May.

According to the Los Angeles Times, more than 4,000 children have been taken from their parents as part of the "zero tolerance" policy implemented by the Trump administration in the spring of 2018. From teens to infants, children who have already been through hardship were subjected to further trauma at the hands of the U.S. government. And make no mistake, being separated from parents in a foreign land with no idea where they've gone or when you'll see them again is, by definition, trauma.

RELATED: The trauma will be long-lasting for kids separated at the border. Here's what you need to know.

Research has proven this over and over, but every parent knows it on a gut level. I still remember the terror on my son's face the time he thought he'd lost us in public once, and that was only for a few minutes. Children can endure all kinds of challenges when they are secure in their parents' care. Taking away that security without necessity isn't just wrong—it's unforgivably cruel.

"People want to make this a heartwarming story, but it's not. It's devastating," Holly Sewell, Byron's foster mother, told the LA Times. "There is just no good reason why we had to do this to this child and this family. And he symbolizes thousands of others who have been put in this exact same position."

Xol was one of nine parents who arrived in Los Angeles to be reunited with their children last week after a federal judge found that the U.S. government had illegally prevented them from seeking asylum. Let's repeat that for those who are inevitably going to show up in the comments of this article saying, "They should go through the process legally!" The U.S. government broke the law here.

According to the law, one has to be on U.S. soil or at a port of entry in order to request asylum; it can't be done from an embassy or consulate in another country. And one's immigration status, by law, has no bearing on whether or not they can request asylum. Here's the actual wording from the U.S. Customs and Immigration Services website:

In addition, at the time these parents arrived, no other country they may have passed through on their way to the U.S. had "safe third country" status, meaning asylum-seekers didn't have to request asylum in those countries. For many asylum-seekers, the U.S. is the only safe option, and for those with family already in the U.S., the option that makes the most logistical sense as well. Legally, these parents were allowed to request asylum and had the right to go through that process.

Even if you have an issue with someone entering the country illegally and then legally requesting asylum, taking their children away from them is a punishment that does not fit the crime (which is technically a misdemeanor on first offense). Family separation is cruel and unusual, both to the parents and to the children. And when you add on the reported depraved conditions of detention facilities and the fact that children have died in them on our watch, it's even worse.

However, one bright spot in this whole scenario is the humanity it has uncovered, as thousands have rallied behind these families to provide them legal protection and representation. The fact that ordinary Americans have to pool our own resources to protect vulnerable people from our own government is enough to make your head spin, but that's where we are.

RELATED: This group raised $1 million in just 9 hours to help kids at the border. Here's how.

Together Rising is one organization who has made an ongoing push to keep families together.

"Although it is a travesty that the administration of this country tore these families apart, Together Rising is committed to representing the heartbroken, angry women of this nation who are standing up to bring these families back together," says Glennon Doyle, founder and president of Together Rising, a grassroots fundraising organization. "Together, we have raised more than $8.5 Million — including $80,000 in 90 minutes this week — to equip boots on the ground warriors, like the heroes at Al Otro Lado, who are finding and reunifying these families, and supporting, and advocating for detained children."

The combined efforts of various non-profit, advocacy, and legal aid organizations to defend the rights of these parents and children are making a difference one family at a time, and bravo to all of them. But how frustrating is it that the U.S. government isn't solving the problems it caused itself? How is it possible that they didn't keep meticulous records of what parents and children were separated, or where they were sent after these separations? Why are we having to raise money and voices and red flags and scramble together lawyers in order to reunite the families our government unjustly tore apart?

There are simply some lines we all have to agree not to cross, no matter what. Cruelty to innocent children is one of those lines. Our country has committed this injustice on our watch, and if we don't speak out and do something to remedy it, then who and what are we?