If watching a movie is like seeing another world, then his latest film is like teleporting to one.

He went from rap videos to the cutting edge of immersive filmmaking. And what he's doing with it is absolutely wonderful. 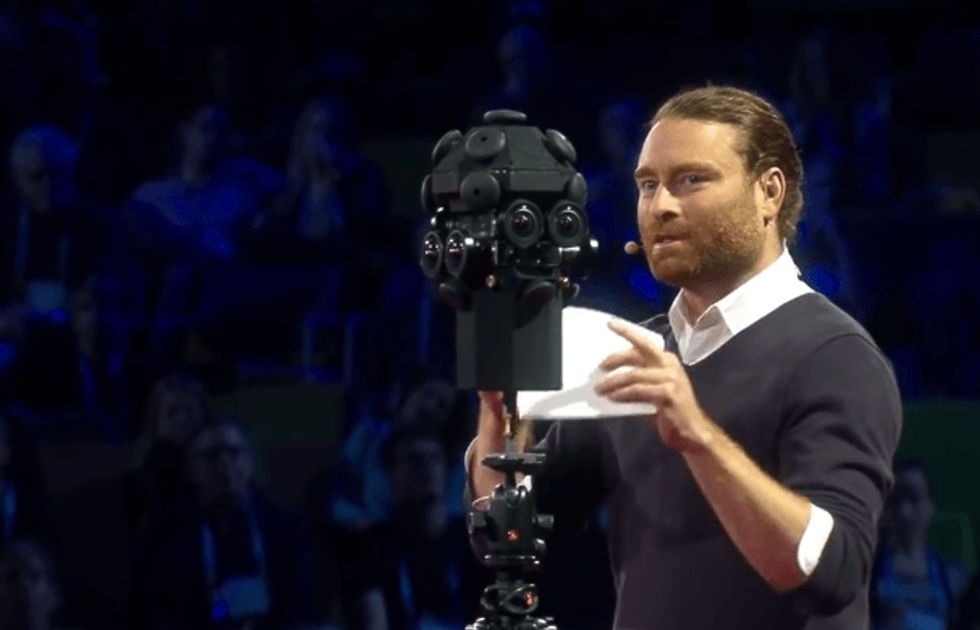 Chris Milk went into film because he sees its world-changing potential.

Milk is a photographer, designer, a bit of a techy, and a filmmaker. His career picked up steam through his mind-blowing media collaborations with some of the most prominent names in music, like Green Day, Arcade Fire, and Kanye West.

His hype video for Kanye West's "Touch the Sky" landed him in the middle of a lawsuit with his boyhood hero, Evel Knievel. (It was settled amicably.)

But Milk believes in order to get the most out of film, not only do the ideas have to evolve, but so does the medium itself.

"Film, it's an incredible medium, but essentially, it's the same now as it was then. It's a group of rectangles that are played in a sequence. ... I started thinking about, is there a way that I can use modern and developing technologies to tell stories in different ways and tell different kinds of stories that maybe I couldn't tell using the traditional tools of filmmaking that we've been using for 100 years? ... What I was trying to do was to build the ultimate empathy machine."
— Chris Milk

Milk says watching traditional film is like looking through a window into another world. But he wanted to put people in that other world. The solution: virtual reality (VR).

He and his tech team built this 360-degree 3D camera and mic gizmo to shoot films that would allow people to not just see but experience another world through VR.

He didn't shoot more Kanye videos with that 3D camera. He started with Syria.

Syrians have become one of the largest refugee populations in the world. Milk wanted to tell that story.

His first virtual reality film, "Clouds Over Sidra," is about a little Syrian girl whose family fled the violent civil war in their country and now live in a refugee camp in Jordan.

When you see the film in VR, you can physically look around and see everything the camera saw. But here's some sample footage stretched out into a traditional film rectangle:

"When you're inside of the headset. you're not seeing it like this. You're looking around through this world. You'll notice you see full 360 degrees, in all directions. ... You're not watching it through a television screen. You're not watching it through a window. You're sitting there with her. When you look down, you're sitting on the same ground that she's sitting on. And because of that, you feel her humanity in a deeper way. You empathize with her in a deeper way."
— Chris Milk

Then he took the film to some people whose jobs it is to make change possible.

After Milk finished his film in Syria, he and his team took their film — and a gang of VR headsets — to the World Economic Forum and showed it to people who could make decisions that would improve the situation for those refugees.

The film was a hit. Maybe not in the same way as "Transformers," but it affected the group enough to catch the attention of the United Nations.

Changing the world, according to Milk, means you have to change people's minds.

Now, Milk is shooting a series of films around the world that will take policymakers out of their armchairs and put them virtually on the ground in places where global aid is sorely needed.

Learn more about how he's expanding his project around the world:

Personally, I'm excited for a chance to experience these films. Meanwhile, here's hoping that Milk is right about what they could do for global empathy and positive change.