'Be careful, she'll blow up,' he said. I'm Iranian. This was my response. 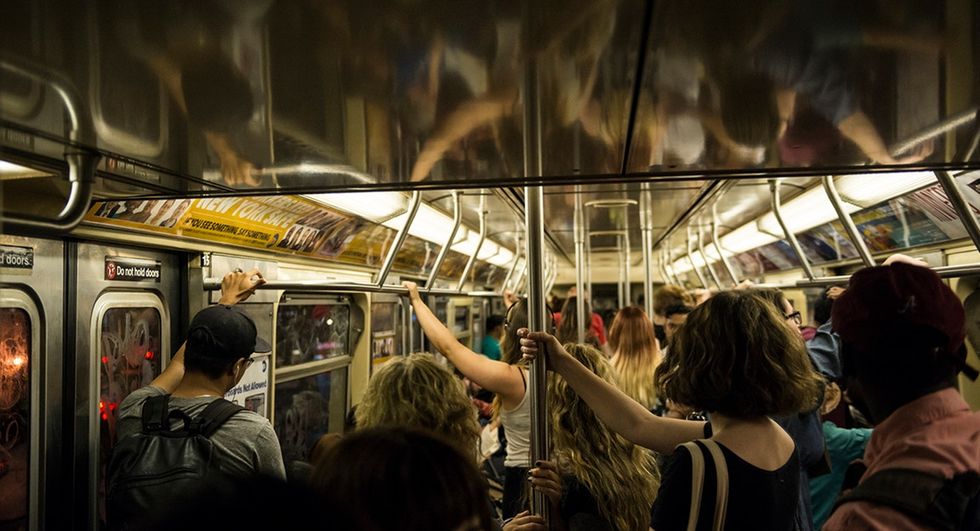 Back in July, I had a racist encounter. I say "encounter" because when you have skin as light as mine, experiences with racism can feel pretty alien.

All napkin illustrations by Anisa Rawhani. Used with permission.

I should start from the beginning.

My boyfriend and I hop on the subway. The man standing next to us strikes up a conversation. We laugh and chat, enjoying the company of a stranger.

Then the man begins to speculate about my white boyfriend’s background, to which he responds that he’s British.

Then it’s my turn.

“And you, you must be Portuguese or Italian,” the man says.

The man turns to my boyfriend.

“Be careful. She’s going to blow up.”


Unwanted attention. Everyone has experienced it, albeit to varying degrees.

Most women experience it when they’re belittled because of their gender. Catcalls, harassment, day-to-day indignities — all to make us feel like we don’t have a right to the space we’re occupying.

None of that is new to me, and each time one of these gender-based indignities happens, I grow a little less shocked and a little more outraged. Each incident piles on and crawls further under my skin, echoing every other time it’s happened to me or a friend.

But when I heard a man say I’d blow up, I entered uncharted territory. Suddenly, my race was the target.

At first, neither of us understood what he meant. My boyfriend thought "blow up" implied I’d get emotional. I thought it meant I’d get fat. Seeing our confused expressions the man clarified: He was talking about bombs.

Maybe if he’d said that to someone browner — someone more "ethnic" — the penny would have dropped faster. When it finally did, I remember feeling shocked and disappointed. That was about it.

It wasn’t like those times men harassed me because of my gender. This man’s words didn’t inspire deep emotions because there were no memories to be recalled. There was no wound for him to reopen and exploit.

Indifference in the face of racism is an unbelievable luxury.

That someone was unable to cause me pain or reduce me to a feeling of nothingness with mere words is not a mark of my own strength, but a mark of my experiences — or lack thereof.

That I’m not insecure about my race isn’t because I’m a confident woman; it’s because I so rarely have to think about it. I’m not constantly being reminded.

After the man on the subway clarified what blowing up meant, I remember:

Feeling my face fall, seeing my boyfriend’s jaw flex, the man sensing the change and backtracking because we were taking what he said too seriously. He wasn’t racist. His girlfriend was Indian and Muslim, which he explained smugly.

When I see racism from the outside I leap to my feet; I’m ready to take on anything. But when it was about me, I couldn't do it.

I just wanted to be as far from that man as possible.

In the time that immediately followed, I thought about all my non-white friends who’d confided in me about moments like this. I thought back on all the times my friends told me about racist encounters with classmates, professors, and strangers. How often I’d thought: Why didn’t you do anything?

I know now what an unfair standard that was.

When you become the target of racism, you’re stripped of valid choices. That doesn’t mean you’re powerless, but you’re working within a set of circumstances that are fundamentally unjust. You’re expected to rise to the occasion when someone’s attempted to strike you down. It’s easy for people with their feet planted firmly beneath them to say stand up for yourself.

We’ve all heard about racist incidents — many far more disturbing than what I described. Many of us (myself included) would like to think if we were in that situation we’d have a witty response on hand — or at the very least that we’d give them a piece of our mind.

Option A: You can try to back up and disengage.

Option B: You can blow up. You have every right to be upset, so you confront the person’s prejudice. You make it clear just how out of line they are.

Option C: You can speak up. When you’re the victim of a racist incident, you’re immediately racialized. When you speak, you aren’t speaking as yourself, you’re speaking as an ambassador of "your people." That’s a lot of pressure.

It’s great in theory, but difficult and emotionally taxing in practice, especially when you’re not exactly prepared for it.

Whether someone speaks harmful words out of ignorance or because they have deep-rooted hatred, they tend to grow defensive very quickly when confronted with their indiscretion.

Not every ear is willing to listen, not every person is worth pursuing, and it’s not the responsibility of victims to educate their assailants.

For those of us who aren’t victims (or rarely are), remember that raising expectations and what-ifs, or questioning why a victim responded the way they did, isn’t helpful.

After the man rambled on about why what he said wasn’t offensive, the train started to slow and my boyfriend said this was our stop. We left the car and waited on the platform for the next train to come.

Some things about this incident remain unclear, but one thing I know for certain: As I waited on that subway platform for the next train to come, I was sure glad I wasn’t alone.

This post first appeared on Raw Honey and is reprinted here with permission.