An anti-gay pastor tried to visit Jamaica. The entire country said, 'No thanks.'

He's running out of places to spread his hateful message. 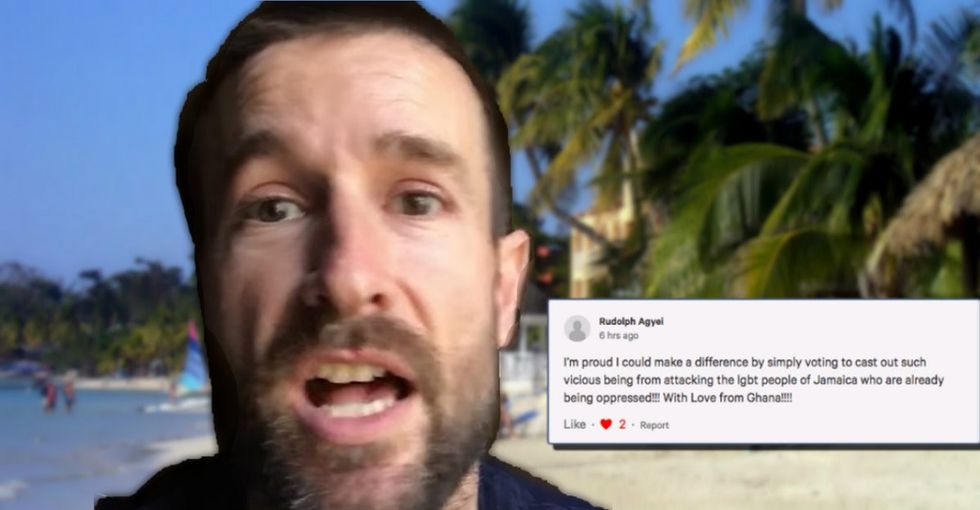 Steven Anderson is infamous for his hateful statements against Barack Obama, the LGBTQ community, and many others.

But when the Arizona preacher tried bringing his divisive message to Jamaica, the country's leaders responded with a message of their own — stay home.

Anderson is the pastor of Faithful Word Baptist Church in Arizona, which the Southern Poverty Law Center labeled an "anti-gay hate group" based on Anderson's statements celebrating acts of violence against LGBTQ people. Anderson was reportedly planning to board a flight to Kingston for a religious mission when he was informed he was no longer welcome in Jamaica.

A spokesperson for Jamaica's Ministry of National Security explained the move in a statement:

"The decision was made by the chief immigration officer because the pastor’s statements are not conducive to the current climate."

The ban is a surprising move for many, considering Jamaica has a less-than-stellar record on LGBTQ issues. In 2014 the Human Rights Watch issued a report outlining violences encountered by LGBTQ people in Jamaica, ranging from discrimination to criminalization to assault. But in the years since, the country has been making strides toward equality, with the ban on Anderson just the most recent in a string of efforts to increase LGBTQ equality on the island.

The announcement of the ban was met with praise from individuals and LGBTQ groups alike.

The decision was praised by the Human Rights Campaign, which credited activism from LGBTQ advocates around the world as pressuring Jamaica into issuing the ban.

And of course, Anderson quickly weighed in on the decision as well. In an unintentionally ironic post to his YouTube channel, Anderson vented about what he called a movement toward a "one-world government" for following the lead of the other four countries who have barred his from visiting. "Apparently, Jamaica they can't really do their own thing, because obviously this is an outside influence," he said.

‌That's a lot coming from a person who wanted to visit another country to preach his own perspective on what he thinks should be universal moral laws.

Jamaica isn't the first to make clear that Anderson, and his message, are not welcome.‌

It's now the fifth country to ban Anderson from visiting, as he was previously barred from entering the U.K., South Africa, and Botswana after announcing plans to visit each country. Those countries banned Anderson after his repeated public statements calling for the stoning deaths of members of the LGBTQ community, advocating the death of President Barack Obama, and denying the Holocaust.

It goes to show that public pressure can be a powerful tool in supporting LGBTQ people around the globe.

Jamaica still has a long way to go in addressing its own support LGBTQ communities, but this ban and the country's improving attitude toward equality shows that it's moving in the right direction. With some helpful public pressure, they're following the example set by other countries when it comes to responding to missionaries for hatred like Anderson.

No one is stopping Steven Anderson from holding, or even expressing, his hateful views. But, as Jamaica has shown, communities and nations can choose not to enable those who preach violence and hate against others.